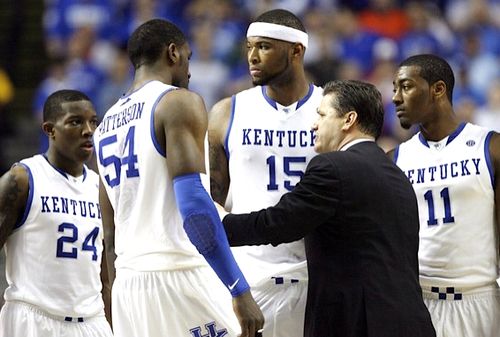 In 2009 when John Calipari came to UK, the greatest players in UK history hadn’t been threatened for quite a while.  But with this 6-year of incredible talent, I wonder if your ultimate UK Starting 5 has changed.  I want to know who you would WANT on your starting 5.  Whether it be because of a guy’s actual game or because you loved his effort.  I am interested in how you would compose a starting 5 and what eras you would pull your players from.  I am not looking for the best player at each position, but rather who you would want.  Maybe that is the best 5, but for me it wouldn’t be that.

And I want 1 more thing from you: YOUR AGE.  I am especially interested in if the older generation pulls guys from the 1950’s and 1960’s.  You will notice no Dan Issel on my team.  No Wah Wah Jones or Bill Spivey.  I didn’t even come close to watching those guys, so I have no real love affair for them.  But maybe fans in their 60’s do.  So, give me your starting 5 and your age.

Here is my team:

-An electric leader who could take over a game at any point.  His talent was only half of his appeal as his personality brought the fans to a new level of excitement.  Plus, unlike most stars, he enjoyed passing more than scoring, which is what I want in a point guard.

-Maybe the best mid-range game of any UK player in my lifetime.  Never saw a player able to stop Mercer on the offensive end.  Was the only consensus 1st team All-American at UK from 1997 through 2010.  Underrated defender.

-Undersized for this position but athleticism makes up for it.  Purest scorer in UK in 30 years.  Inside-out game makes him a mismatch at any position on the floor.  Can handle himself on the boards against bigger power forwards.

79 Comments for BTI’s Rants and Ramblings: Who is Your Ultimate Starting 5?