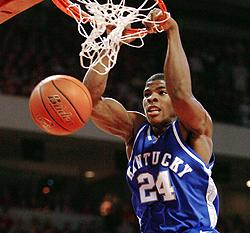 I don’t know why but I am feeling sentimental but I’ve been thinking back to the good ‘ol 2000’s Kentucky Wildcats.  I think part of me sees the writing on the wall for Tubby Smith at Memphis and feels bad.  Tubby’s time here only improved the history of this program.  National title and conference titles plus a couple of the most beloved teams in history.  Nonetheless, don’t you feel like in every decade there always seems to be that one guy who someday you will tell your kids “nobody mentions this guy but he was damn good”.  I feel like I hear Dwight Anderson’s name mentioned a ton by older fans.  In the 90’s, I always feel like that guy was would be Allen Edwards or maybe Walter McCarty.

For example, I feel like those who watched UK basketball in the 1980’s mention DWIGHT ANDERSON a lot but he really doesn’t get included much in the lore of UK greats.  I watched a lot of 1990’s UK basketball and I don’t think Walter McCarty or Nazr Mohammed will never get the credit for just how good they were.  Talk about the greats of the 90’s and those guys are not mentioned much.

But I want to mention a guy during my teenage years that I don’t think got enough respect and will probably go down as the forgotten man of that decade 50 years from now: Kelenna Azubuike.  He was our Human Highlight Film but because he left school early and never really led a team and you forget just how good he was.  The guy is a Top 75 scorer in school history with nearly 1,000 points.  He scored 500 points in his final year at UK.  He was a part of two #1 seeded teams, 3 SEC Champions, and 2 Elite 8 teams.  But above all else, he could do this:

I just don’t know if people who didn’t see him play will ever truly appreciate just how good Azubuike was.  And for that, I am calling him the forgotten man of the 2000’s.  Would you agree or do you have another player who goes underappreciated (in that decade or any other)?

28 Comments for BTI’s Rants and Ramblings: Who Are The Forgotten Players Of Each Decade?