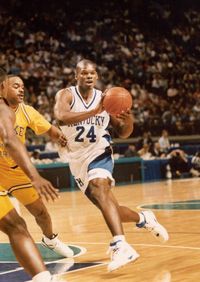 Let’s take a look at little more small picture on the best UK performances of all-time.  We often talk about the greatest games/seasons/eras of UK basketball, but what about the best HALVES?  This year, we saw one of the more alarming halftime scores in UK history when UK routed UCLA 41-7 in the first half of their game in Chicago.  These 3 games immediately come to mind when asked about the best half:

But my pick would go back even further.  I would say the first half of the 1993 NCAA Tournament Sweet 16 game against Wake Forest would be the best half I have ever seen Kentucky play.  Not only did it come in a more pressure-packed tournament game, but I think this was the absolute peak performance of a Pitino team.  Yes the 1996 team was a better team and had some dominating performances, but I feel the high pressure, 3-point shooting style Pitino implemented was on full showcase in this game.  So without further ado:

24 Comments for BTI’s Rants and Ramblings: What is the Best Half of Basketball UK has Played?