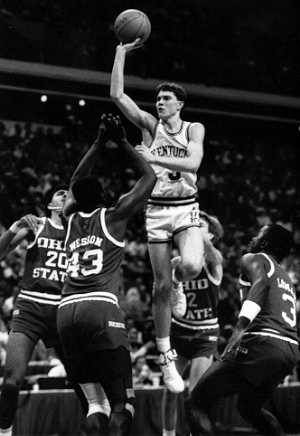 How do we, as Kentucky fans, determine our greatest?  The overall wins record is nice.  The historic coaches are wonderful.  All-Americans are icing on the cake.  Recent success in the NBA is lovely.  But ultimately, we determine our greatest by NCAA Championships.  We determine the success or failure of a season by (hopefully) 6 games in the months of March and April.  And whoever is able to take us out of the NCAA Tournament leaves a scar in this fanbase that we rarely get over.  Yet with Ohio State, we don’t seem to remember the scars.

Because if you didn’t know, Ohio State has knocked Kentucky out of the NCAA Tournament more times than any other program in the country.  They eliminated the Cats a total of 5 times in the tournament, 1945, 1961, 1962, 1968, and 1987.  Marquette has also eliminated the Cats 5 times but no other program has done it more than 3 times in school history.  The Buckeyes have dashed our dreams more than any school in the country.  Why don’t we hate them more for this?  Is it just because it has only occurred once in the last 50 years?

Whatever the reason, I don’t think our fanbase has any animosity for the Buckeyes.  Maybe it deals with the fact they don’t care about basketball.  Maybe it is because we still don’t play them very often.  They are a forgettable basketball program.  But if we want to boil up some hatred for the game on Saturday, we have a very obvious reason to do so.

3 Comments for BTI’s Rants and Ramblings: We Should Hate Ohio State Way More Than We Do