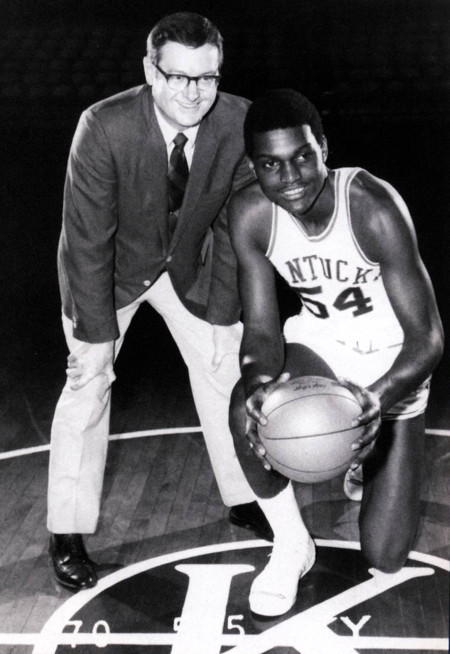 Every Friday from now until the beginning of football season, I open the Friday Rants and Ramblings post up to the reader.  Part of what makes this fanbase great is the memories and stories that people cherish so much.  So I am asking you to send me your favorite UK story.  Whether it be a joyful moment or one that brings tears to your eyes because of the heartbreak, something that sticks with you as a fan of UK.  You can send these stories to [email protected].  You can even send me a picture if you want.  Either way, I like hearing from you.  Today, one fan gives a recap of the long road to integration of the UK basketball program:

Kentucky had dominated college basketball throughout the 1940’s and 1950’s. UK ranked #1 in W-L percentage during those two decades and won 4 NCAA titles and an NIT title in that era. UK was undefeated and probably the best team in the country in 1954 but declined to play in the NCAA tournament that year because its 3 senior stars were ruled ineligible to play in the NCAA.  But the integration of college basketball changed things for the Wildcats. Beginning in 1960, every NCAA champion has been an integrated team. And the best HS players in Kentucky during the 1960’s included many black players. Names like Michael Redd and Clem Haskins in 1963, Westley Unseld in 1964, and Alfred (Butch) Beard in 1965 are
legendary in Kentucky high school basketball history.

The year 1967 topped them all. Black stars Jim McDaniels, Jim Rose, Clarence Glover, and Jerome Perry led the Kentucky All-Stars to a sweep of Indiana and enrolled as a group at Western Kentucky. And 1969 would produce black stars like Tom Payne and Ron King.  UK basketball started to recruit black players actively in the mid 1960’s.  UK signed black track star Jim Green of Eminence KY and football stars Nat Northington and the late Greg Page to athletic scholarships.  But basketball was another story. UK didn’t really try very hard to sign Clem Haskins so he went to Western Kentucky where he led the Hilltoppers into the NCAA tournament and earned All-American honors.

The year 1965 brought changes to the UK coaching staff. Longtime assistant Neil Reed moved on and was replaced by Joe Hall, who played for Rupp at UK in the late 1940’s.  Hall quickly implemented changes to a UK recruiting system that had been floundering for a few years. Joe Hall worked his recruiting magic that  spring by signing 12 players to UK scholarships. (Yes, 12 – there were no limits back then) None of the 12 was black. UK tried to sign Parade A-A forward Perry Wallace of Nashville in 1966 but he opted to attend hometown Vanderbilt instead. Wallace was the first black (varsity) basketball player in the SEC in the 1967-68 season.

Hall continued to recruit black players as part of his UK recruiting efforts. One of his top targets in 1968 was 6-8 big man Joby Wright of Savannah GA. Wright was yet another Parade 1st team HS All-American and visited the UK campus that spring. But Wright wound up at Indiana where he ultimately played for legendary IU coach Bobby Knight. Finally 1969 rolled around. Black players continued to dominate the landscape in Kentucky HS basketball. Once again two KY players were chosen Parade HS All-Americans that spring. They were 7 footer Tom Payne of Louisville Shawnee and “shooting star” Ron King of Louisville Central (1969 Kentucky HS champions). Both players visited the UK campus later that spring.

King opted for Florida State following in the footsteps of Kentuckian Dave Cowens to play for Hugh Durham. Payne was highly recruited by major schools across the country and narrowed his choices to UK and UCLA. He also played in the Dapper Dan Classic and waited until June before finally making his college choice. And it was Kentucky!!!

Finally the Wildcat basketball program would be integrated.  But Payne would prove to be ineligible to play as a freshman at UK or even earn a scholarship due to some academic shortcomings. His parents paid his way to attend UK as a freshman and he played on an AAU team in Lexington that year. Payne got his grades in order and became a star on the UK varsity in the 1971 season. He earned All-SEC honors and wound up declaring himself eligible for the NBA Hardship Draft of underclassman in 1971. He was picked second by the Atlanta Hawks behind Nate Williams of Utah State, who was chosen by the Cincinnati Royals. Payne was the second “One and Done” player ever at UK after LeRoy Edwards, who left UK in 1935
to play pro basketball after his sophomore season.  But history will forever record Tom Payne as the man who integrated the UK basketball program in the 1971 season. Payne had enormous talent and basketball skills that were never fully realized.

Adolph Rupp retired in 1972 and Joe Hall was named UK head coach. Hall would proceed to sign many black basketball stars with Kentucky roots. Reggie Warford was an All-State guard at Drakesboro in 1972.  Larry Johnson of Union County and Merion Haskins (Clem’s younger brother) of
Taylor County were signed in 1973. Lexington stars Jack Givens (Parade HS AllAmerican) and James Lee chose UK in 1974. Those 5 were the first black players to make a Final Four appearance for UK in 1975.  Joe Hall probably deserves a lot of the credit for successfully integrating the UK basketball program beginning in 1969 and throughout the 1970’s. But it was the unlikely duo of Tom Payne and Adolph Rupp who are recorded by historians as integrating the Kentucky basketball program.