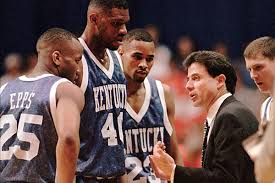 Those are the major lasting points of the Rick Pitino era at the University of Kentucky.  Many or most UK fans couldn’t care less about those stats after Pitino took the UL job.  But there has always been a silent majority (minority?) of UK fans that would still appreciate what Pitino did here at UK, especially after saving UK from the depths of probation as quickly as he did.  Unfortunately, those people are often shouted down by those who will never forgive Pitino for taking the job of the rival.  Both sides have strong arguments on how to feel about Pitino.  That’s not the argument here.

And then Pitino’s sex scandal occurred with Karen Sypher and many UK fans took joy and humor in that.  Some Cats fans argued that was a personal problem for Rick and it was none of their business.  Others took delight in their hated rival’s coach embarrassing himself at a public establishment and a public trial.  But UK fans were certainly not in any kind of agreement of where to stand with Pitino.  Especially with Calipari taking off at UK and the Cats finally back to national prominence, I think the opportunity was there for UK fans to lighten up on Pitino.  Some will never, but many had moved on.

But this latest scandal to strike Pitino, whether directly involved or not, has to make any UK fan strongly question whether they can have positive feelings about Pitino ever again.  I personally don’t think Pitino knew what was going on with these prostitutes and what they were being hired to do, but at the same time, this is his program and culture around it is created by Pitino.  He does have to take some of the blame, if not much of the blame.  The scandal is so disgusting, even if only part of it is true, that any goodwill that had not already been built up with UK fans is basically gone.  Hell, you are hearing a TON of Louisville fans who are expressing fatigue in dealing with these issues every few years and are calling for a resignation.

The reason I bring this up is because there has always been this assumption that whenever Pitino retired from UL that UK fans would begin to lighten up on their hatred.  There was even talk about him being welcomed back into Rupp Arena someday, maybe with reunions of the 1992, 93, or 96 teams.  Who knows?  Only time would have told.  But I think the gigantic majority of hatred towards Pitino was simply about his UL connections, and if those were no longer there, UK could accept him once again.  For some, that was never going to happen.  But a more reasonable fan was willing to respect what Pitino did and accept him back into the group.

Now he has 2 sex-related scandals tagged to him, one that directly involved him.  Luckily for us, none of those occurred when he was at Kentucky.  But Pitino will always be linked to Kentucky.  In much the same way that problems at UMASS and Memphis for Calipari have stuck to Kentucky even though Cal has had no issues while here.  So the question is this: ARE WE AS A FANBASE COMPLETELY DONE FOREVER WITH RICK PITINO?  Even after Pitino leaves UL, will he ever be welcomed back into the UK family?  And if you were a supporter of Pitino before this latest scandal broke, was this the final straw in continuing that support?

48 Comments for BTI’s Rants and Ramblings: Is Pitino Officially Toast With UK Fans?