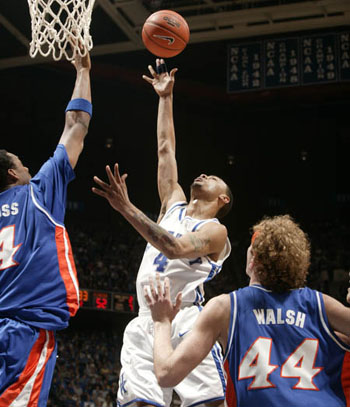 After watching the Duke game last night and the highlights from their top players that all writers clamored for, I have a feeling that Duke might be the preseason #1 team.  It’s possible it could be Kansas and it’s possible it could be us.  But I think it will be Duke.  And if it is, that will mean Kentucky will be playing a #1 team in the regular season for the 13th time in school history.  The previous 12:

A combined 2-10 in these games and no wins away from Lexington.  Now you could argue that most of these games occurred in the early part of the season when the team was not at its best.  You could argue that they really don’t matter, as the Duke game really doesn’t matter all that much.  And when it did matter, Kentucky is 4-5 in the SEC/NCAA Tournaments against the #1 ranked team in the country.

Either way, there might not be a regular season game I have been more excited about than this one.  I don’t think we have a better player than RJ Barrett and maybe not better than Zion Williamson.  But 1 through 8, we certainly have the better TEAM.  Which makes this game even more interesting because Calipari has always been the guy with the better players against programs who claim they have better “teams”.  It’s a little bit of a switch in the reputation of the Calipari era.  And I can’t wait.

50 Comments for BTI’s Rants and Ramblings: If Duke is #1 in November…….