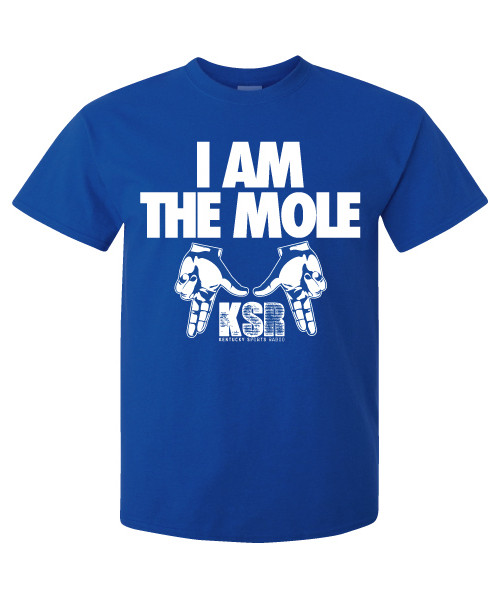 Get your “I Am The Mole” t-shirt here.

John Ramsey and Mike Rutherford of “Ramsey & Rutherford in the Afternoon” are seeking a dismissal of the lawsuit against them, arguing they are protecting by the First Amendment, among other reasons.

In case you hadn’t heard, they are being sued by Scott Jennings of the RunSwitch PR group, who they accused of being KSR’s “snitch” inside the Louisville scandal. That of course is not true, and Jennings is out to have his name cleared in a defamation lawsuit against the show. One of the comments they made about Jennings and RunSwitch was “(he) deserved to lose business based on this. I do hope that is the case. That is not how you do PR. You should not have a job.”

Attorneys said shortly before U of L held a press conference announcing the ban, Kentucky Sports Radio reported information “that could only have been attained from someone” in a meeting with university officials and RunSwitch, which has a contract to provide public relations advice to the U of L Foundation.

The Feb. 16 radio discussion about Jennings was prompted by a tweet from someone in the community soliciting opinions regarding “the story about the PR firm leaking info to Bangs (Jones),” according to the response from Ramsey and Rutherford’s attorneys.

Rutherford said on air that Jennings is a noted Kentucky fan, that “a lot of people” have seen he follows UK people on Twitter and that he tweeted at Jones on the day of the ban, according to the response.

The tweet, according to a transcript of the show provided in the response, said “cheers” or “something that he has since deleted,” Rutherford said. “He’s deleted a bunch of tweets so it sounds like …”

“Not too bright,” Ramsey responded, according to the transcript. [WDRB]

Ramsey and Rutherford want the lawsuit dropped, according to WDRB’s new story.

Meanwhile, KSR is just sitting around wondering who Scott Jennings is and how he was wrongfully identified as the mole. You’ll never find our mole.

2 Comments for An update on the Captain Suntan lawsuit