The last two weeks on the recruiting front have been two of the best during Mark Stoops’ tenure.  Since April 30, the class of 2018 has added four impact recruits: a trio of offensive linemen and quarterback Jarren Williams.

Now the 21st ranked recruiting class in the nation, third in the SEC, here’s what Stoops has in the eight-man class, along with his top remaining targets.

Before April 30, Kentucky had zero offensive linemen in the class.  Since then John Schlarman has had plenty to smile about.

The first piece to fall was Darian Kinnard.  The lowest-ranked of the offensive line recruits as the No. 32 offensive tackle, he has the desired measurables at 6’7″ 335 pounds.  From St. Ignatius High School in Cleveland, he’s already gained valuable experience playing for Chuck Kyle, a coach who’s won three national titles.

Michigan’s Marquan McCall was an important addition to the offensive line and to Kentucky’s recruiting strategy.  The first Michigan commit for Mark Stoops, Steve Clinkscale convinced the best player in the state of Michigan to turn down Jim Harbaugh and leave home for Lexington.  The No. 4 offensive guard in the class and Top 100 player overall has exceptional size (6’4′ 320 pounds) for an agile interior lineman. 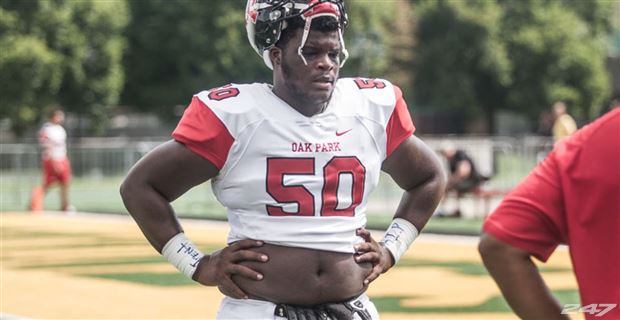 Kentucky’s first commitment in the class came from a Florida defensive end who excels with his hand in the dirt.  Mark Stoops has groomed some phenomenal outside linebackers but has struggled to find five and three-technique defensive ends who are tasked to play with the big dogs in the trenches.  At 6’4″ 250 pounds, Davoan Hawkins has what it takes to play inside with the big dogs.  From Chaminade-Madonna Prep in Hollywood, Florida, he also brought a teammate to Kentucky, wide receiver Marvin Alexander.

Alex Reigelsperger tends to trend more to the outside linebacker mold.  The most vocal member of the 2018 class, he quickly emerged as a leader.  His next and most important task: convince L’Christian “Blue” Smith, his Wayne High School teammate, to join him in Lexington.

I don’t care how many great recruiting classes Mark Stoops has, it’s hard to do anything without above-average quarterback play.  Of all the things that made last season two wins better than the previous two, consistent quarterback play deserves most of the credit.  Kentucky has found some consistency; Jarren Williams is the dynamic playmaker that can take Kentucky to places never before seen.

For the people who prefer rankings, the dual-threat quarterback is just a three-star, but that won’t last long.  An Elite 11 finalist, he’ll be a four-star, Top 150 recruit when it’s all said and done.

Williams currently has three passing targets to choose from in the class: tight end Brenden Bates and wide receivers Marvin Alexander and Shockey Jacques-Louis.  There will be a few more offensive weapons needed at running back and one special wide receiver.

They don’t make outside wide receivers much better than Blue Smith.  The Top Five wide receiver does everything well — catches jump balls, creates separation at the line of scrimmage, gets yards after catch.  You name it, he does it  He also is/was Wayne High School teammates with two UK guys, Alex Reigelsperger and Tobias Gilliam.  Kentucky is in a good position with Blue, but Ohio State looms.

If Kentucky could land the dynamic duo from Lakota West High School (Cincinnati), it would bring superstar power to two positions of need, inside linebacker and defensive tackle.

The recruitment of Bentley, a Top 50 defensive tackle, was initially a two-horse race between Kentucky and Louisville.  He decided to push a summer decision back once the big dogs got involved: Alabama, LSU, Tennessee, Florida and LSU.  Still, the Cats are the 247 Crystal Ball favorites.

As Jordan Jones and Courtney Love’s time at Kentucky nears a conclusion, Stoops turns to Xavier Peters.  A consensus four-star Top 250 prospect and an Opening Finalist, Penn State is Kentucky’s toughest competition for the elite linebacker, even though he has an Alabama offer.

A defensive end from Cleveland Heights High School, the home of Dorian Baker, he’s one of the ten best pass rushers in the country and a Top 150 player overall.  Today he trimmed his list to 12 and the Cats made the cut.  Ohio State, Notre Dame, Penn State and USC are the early leaders, but he told Rivals, “I am definitely going to go see Kentucky.”

Benny Snell and Sihiem King will be finished at UK after the 2018 season, leaving just three running backs on the roster.  This position of need will likely be filled by a late-emerging target who surfaces in the middle of the season.

When Steve Clinckscale first went to Michigan, McCall wasn’t the only player to see on his agenda.  Many of the elite athletes he offered were younger, following Kentucky’s “Find ’em First” approach, but there will likely be one or two more from the Great Lake State to follow in McCall’s footsteps in the class of ’18.  One name to keep an eye on: DeAndre Square, a Top 25 safety in the class.