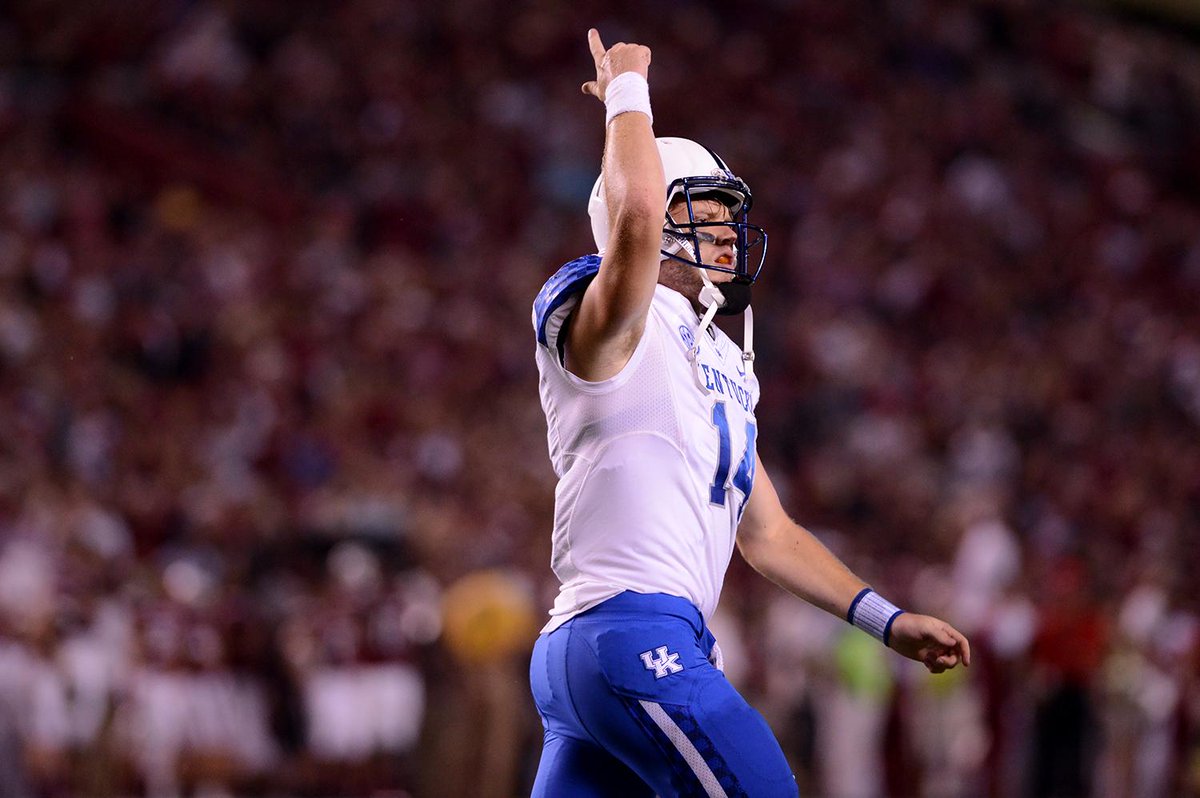 Good morning, BBN!  No, you weren’t dreaming.  The Kentucky Wildcats snapped their 22-away game slump last night, as they defeated South Carolina 26-22.  It marked the first SEC win on the road for UK since beating the Bulldogs in Athens back in 2009.  It’s hard to believe it’s been so long, but worry no longer.  All of that is in the past, and the Wildcats look to continue their success next weekend when the Gators come to town.

For two years in a row, Mark Stoops has defeated Steve Spurrier, an accomplishment no Kentucky coach has ever made.  It’s only the third time the Ole Ball Coach has fallen to UK, and each victory gets even sweeter.  As it was discussed on last night’s KSR postgame show, Kentucky is clearly on the rise in the SEC East, as USC seems to be falling.  With the Gamecocks’ recent recruiting classes, I think it’s safe to say Kentucky has more young talent, and it showed last night.  The football program has taken the next step towards success, and I can’t wait until next Saturday.  Commonwealth Stadium will be rockin’ when Florida arrives!

As much as I want to keep talking about our victory, there’s also a lot of football left this weekend.  That’s right!  It’s finally time for the regular season in the NFL.  For football fans, NFL Sunday Kickoff is one of those days you circle 7 months in advance.

Let’s take a look at all the match-ups taking place:

Here are a few things to watch heading into today’s games:
In Green Bay, Randall Cobb is still listed as probable after being injured mid-way through the preseason.  Keep an eye on this game, especially if you play fantasy football.  Cobb’s not only a UK fan favorite, but he’s also a top WR for fantasy football leagues.
The Bengals head to Oakland today, looking to make the playoffs for the 5th straight year.  It starts with a win in week 1, and the Raiders are a team slowly on the rise.  With AJ Green signing a 4 year extension, expect to see him make some big catches today.
Staying locally, the Titans open up with Marcus Mariota at starting QB, as it’s a CFP rematch against Tampa Bay’s Jameis Winston.  There will be a lot of eyes on this game, for the sole reason of who drafted the best QB.  It’s not exactly the fairest comparison, as each team has its own philosophy for QB, but it’ll be interesting to see who comes out on top.

For you soccer fans, UK’s women soccer team has a big game today against Wisconsin.  That game will take place at 3:00 PM ET, and you can catch all the action live on the SEC Network.  Good luck and Go Big Blue!