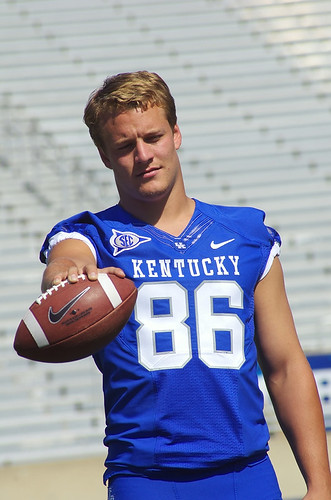 Aumiller committed to Kentucky early in the summer prior to his senior season of high school at Boyle County. He only held offers from UK and Marshall at the time but believed a Louisville offer was coming soon.

Redshirted as a linebacker and earned Scout Team Player of the Week honors twice throughout the season.

Saw his playing time diminish behind senior tight end Nick Melillo; Aumiller started in one game but did not catch a pass on the year.

Played in three games but failed to record a reception for the second season in a row.

His nickname is “Lank.”

Beyond thankful for a lot in life!

After going two full seasons without a catch, Jordan Aumiller is ready to take over the starting tight end duties for the Wildcats again. Vince Marrow said last week that Aumiller has a slight edge over Anthony Kendrick at the position, but both can expect to get a lot of opportunities in the new Air Raid offense.