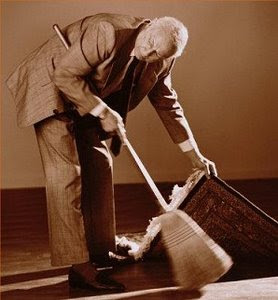 While details surrounding the arrest of two UofL basketball players at a Jeffersonville, IN alumni event are still being sorted out, the reaction around the program has been, well, as expected:

Rick Pitino
“Here we are on this, the day of Columbus—intrepid pioneer of the Americas, fortifier of man, breath of hope to the breathless—and you guys want to talk about a minor transgression involving two of my players? I realize we live in a world where news gets reported and everything, but to take away from the accomplishments of a man like Sir Christopher Columbus is not only a gross disservice to the Columbus family, but to each and every one of us fortunate enough to call this land, ‘our land.’ This is a non-issue and one that will be handled internally…and yes, she did say that, bitches.”

Drew Deener:
“Details are still blurry and likely inaccurate, and we can only judge the incident based on the facts we know, and so far all we know is this: Two Louisville basketball players, purportedly thirsty and looking for a water fountain and/or pop machine, walked into the line of a taser gun being recklessly test fired by a Metro Police officer and known UK fan. What this looks like on the surface is yet another malicious attempt to extort the pride and glory from the UofL program while right down the road in that city where I as recently as last year hosted a UK-themed call in show, a certain head coach is building a program on the stilts of lies and irresponsibility. When we get back, I’ll tell you how this will actually end up being a positive for Pitino and the Cards, and we’ll open up the phone lines and talk more about the big win against the Eagles of Southern Miss this past weekend and more fallout from the UK’s embarrassing loss to the Gamecocks…”

Afternoon Underdogs
“But here’s my point: who hasn’t been tasered at a homecoming banquet?”

Steve Kragthorpe
“Wait, what? No, I don’t have a comment. To be honest, I saw a sea of reporters standing out here in front of my office and I thought you all knew something I didn’t! Whew! I was gonna say, the least they could’ve done was give me a courtesy call! Man alive. Look at my hand, I’m actually shaking! Woo boy, I was a little pissed off because I’ve been thinking a lot about what I’m going to do when I’m actually let go, and I’m still in the planning stages–just a couple more loose ends to tie up, but it’s going to be huge! It’ll flat own on Youtube. You think Rick is the only one who can cause a public scene? Sheeit. I probably should have stopped talking a long time ago…”

Tom Jurich
“We are committed to commitment and are excitedly working towards continuing to build and grow the UofL brand as we take the athletic department, this university, and the entire The Ville community above and beyond the realm of today and into a promising tomorrow.”

Please be sure to note that I am currently attending a banquet in Florida on behalf of the women’s volleyball team, but I swear to god, if I get back to Louisville and there is even one word, ONE WORD about this in the print, I’m pushing the big red button and hell will indeed, break loose. Ball’s in your court…run the right play.
TJ

Chris Cross
“So I says to the guy, ‘hey, guy, the Yanks are gonna sweep the Saax this year.’ But what does he know? He should have gone to Steepleton’s Billiards and Spas, where he might not be able to buy his Saax a playoff win, but he can get a great deal on a Whirlpool hottub. Don’t forget to tell em, Chris Cross said, ‘ay, come ova he’a.'”

Joe B and Denny
“I’m not sure about you Denny, but when I had a player actin’ up and gettin’ caught with his head in his keester, I just assume run em til they puke. Shoot, I remember one time when we were on the road, I think it was either in Florida or the Square Garden up there, but I caught this player–a fella who’ll remain nameless–out tomcattin’ with the local coeds well past curfew. Boyyyy, you shoulda seen the look on his face when I told him to meet me in the gym in 5 minutes. Of course, they didn’t have tasers back then except for up there on the space station.”

Pat Forde
“Calipari did what?!”