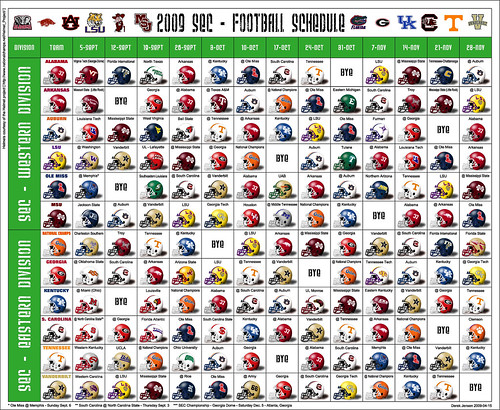 Here’s a little football app for the palate, with full team break downs in store for the near future. Get excited people, there is literally nothing else to live for right now.

EAST
USC: Has there been a bigger upset in the SEC over the last five years than the fact Steve Spurrier has not only failed to threaten for a conference title but has failed to cultivate a great QB? Hell, he hasn’t even put out a good QB. Will Garcia be the answer?

Tennessee: Yes, Kiff’s UT honeymoon has been fun for all, and a free-for-all, but while we here in KY and abroad are hopeful for a swift and utter meltdown, those who expect it are jumping the gun. Eric Berry. Bryce Brown. Gerald Jones. Rico McCoy. Not to mention a HOF’er running the defense and the rabid coon-ass bathing in Red Bull and spearheading the recruiting trail. Whether or not Kiff can actually coach, well, we shall see.

Florida: On pape, it looks like Urban’s best team yet. And that is horrifying, bordering on unfair. Even with the video game offense, this team’s strength is the D. Let’s be honest, unless T’bow gets injured, who’s going to stop the Gators from a 3rd Nat’l title in 4 years? Police?

UGA: Hard to believe the Dawgs couldn’t win the league with Stafford and Moreno…harder to believe they can with Joe Cox and Caleb King. Or, is it?

Vandy: Picking up the pieces after the school’s Banner Season will not be easy, and with an absolutely brutal schedule, it will in fact be impossible.

UK: Even with two of the nation’s best on defense and an experienced O-line, the song remains the same: can they score? And, would you trade a 6-6 bowl bound season for a 2-10 mark with wins over UT and SC? I would.

WEST
LSU: Even with a National Championship in the bag, you get the sense ‘dem Cajuns are still leery of Les Miles. Horrendous QB’ing did this team in last year, and while presumed starter Jordan Jefferson has tons of ability, he’ll have to prove he can lead, and LSU can’t win the West if they have to hide the QB yet again.

Ole Miss: Rarely would you apply the word trendy to anything Ole Miss, but indeed the Rebs are one of the hottest preseason teams in the nation. Jr. QB Jevan Snead is garnering Heisman talk and Nutt continues to coach and develop the abundance of talent Orgeron could not. They have speed, a QB, and one of the best D-lines in the nation…they also haven’t won the SEC since 1963.

Bama: Last time we saw the Tide, they were pissing away a season of luster at the hands of the WAC. John Parker Wilson’s genteel legacy, textbook bangs and catalog of school records will be tough to replace, but good luck scoring on this defense. Scary. Don’t expect Va Tech to lay down in the Dome like Clemson in last year’s opener, but they are spared from the Gators.

Arkansas: To me, the Hogs are the SEC’s most intriguing team this season. I think they could make the run many people think Ole Miss will make, but could also languish in 6-6 territory. For starters, they are now Dick-less, and inherit the blue chipped cannon of Michigan defect Ryan Mallet. We know what Petrino can do with a capable QB. They also return one of the SEC’s best in shifty RB Michael Smith, and a switch from Texas to a home date vs. A&M is a clean W for a L. The defense has holes and could be damning, but that sumbitch is quickly assembling an SEC force.

Miss St: With Sly Croom now but a mere reflection in the lake of tribulation and Urbanite Dan Mullen on board, maybe State will actually play this century football and who knows, maybe Jackie Sherril will finally get that bobble head night. How will Mullen fare with the spread attack this year? Somewhere between Elliot Uzelak and Tony Franklin is my guess…

Auburn: With the Tub now scrubbed for the bloop single hire and former DC Chizik , the Plainsmen hope to rebound from one of the more outlandish seasons in recent memory. Tony Franklin, offense-revolutionist, is out, Gus Malzahan, offense-revolutionist, is in. So how patient are fans willing to be if yet another attempt at a pass-happy offense struggles to take flight?

Can you imagine a season of southeastern football sans sideline staples Tuberville and Fulmer? It’s damn near taboo. Even more confounding is the overall lack of good/experienced QB’s. The league that has watched 5 of its QB’s go #1 overall in the draft since ’98, might only have 2 drafted at all next year.