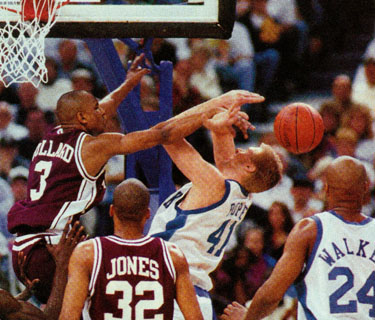 …Down to Georgia. That’s right, Mark Pope, former starting Center on the most dominant team in Kentucky history, was hired to the Georgia staff as Operations Coordinator, where he will be tasked with coordinating various operations and what not. Needless to say, a step up from Wal-Mart.

Often lost in the maelstrom of the dizzying talent he played with, Pope was about as solid as they come, both on the court and off. I remember my first glimpse of the Washington transfer at BBM back in ’94 (you know, back when the news of a transfer took days to cross the wire…DAYS!!) and I thought it was Todd Svboda. Pope’s career figs for his 2 seasons at UK are modest, but you knew he’d be just about any other team’s best player, as evidenced by his several servings of NBA coffee. Pope is not only a champion, but an icon. What he did for the crew-cut is comparable to what Steve Tannyhill did for the ponytail, and it’s great to have him back in the SEC.