State of the program: You can make a strong case that Jo-ja has been the premier team in the SEC East since the suave Mark Richt took over in 2001. Their 61 wins in that span ranks 6th nationally, and two SEC Championships in the past six seasons is equaled only by LSU. Excluding last season’s debacle (by their standards), the Dawgs have been the model of consistency, although they’ve failed to land the haymaker, unlike LSU and Florida.

So you’re saying there’s a chance: With their decade of prosperity, it’s really difficult to envision two successive mediocre seasons betwixt the hedges. Wide-eyed and a tad overwhelmed last season as a true-frosh, QB Matthew Stafford was more harm than help most of the season. Until that fateful day in the Bluegrass, which apparently exhumed a pretty good football team (defeated three ranked opponents to close the season), beginning with Stafford. An underrated crop of RB’s will only make his job easier, as SR’s Kregg Lumpkin and Thomas Brown figure to get plenty of touches. And we all know, if you can run it, you have a shot. Add to the mix the league’s best kicker, Brandon Coutu, who just might be good enough for a win or two by himself.

Hey, what was all that one and a million talk: You know, maybe their sustained prevalence in the SEC is due for a recession. There’s not a bad team in the East this season, so someone has to take those L’s. Might it be the Dawgs, with their depleted defense and numerous suspensions?

Schedule: The mettle gets tested right out of the gate with what figures to be a solid Oklahoma St. squad ridin’ into Athens Sept 1. The conference schedule is about as favorable as you’re going to find amongst the SEC, trips to Tuscaloosa and Knoxville notwithstanding. Play SC and UK on the road, and you’re looking at coin flips. Get em at home and they morph into likely wins. Perhaps you can throw Auburn into that mix as well. As usual, the showdown with Ga. Tech to close the season looks like it’ll be a dandy. 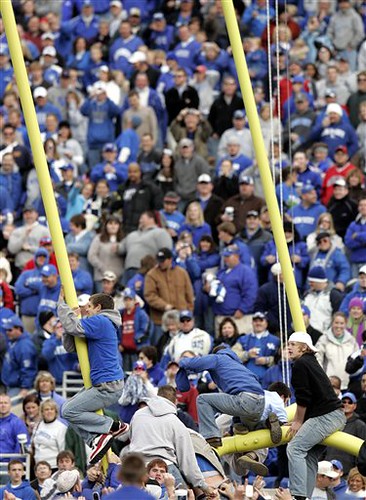 Giving back to the community: Ah jeez, where to start…well, freshman RB Caleb King was arrested…on his moped. King was “moppeding” on a suspended license (a moped license?) and down what happened to be a one way street. The moped, which Green probably named “Zip”, was uninjured. F-in freshman. Am I right? Am I right? Then there’s DE Tripp Taylor who apparently incites brawls with R. Kelly. Taylor was nabbed by the fuzz for his connection in a fight in which a dude was baseball batted, then pissed upon. Drip, drip, drip.

In conclusion: After a nightmare 06 that saw losses to Vandy and UK (thank you very much), I look for Georgia to bring a little glory, glory back to Dixieland. No conference championship, but certainly an improvement off 9-4. I think Stafford becomes Eric Zeir-ish this season, and a steady running game will overcompensate for a very green, but talented defense. They showed at the end of last season that they’re not quite ready to stand down to Spurrier and, cough, Brooks, and I believe the momentum has spilled over. Now, if you’re painfully bored, a “Midnight in the Garden of Good and Evil” fan, or if you’re a dog enthusiast (insert Vick joke here), spend 5 minutes and inundate your mind with history behind UGA, a mascot so legendary he has his own freaking movie. Eat. Sh*%. Sleep. Make movie.