Pleased to be joined by ESPN’s master of emotion, Tom Rinaldi, who brings us a story that hits close to home. Too close to home. Like, watching you shower and stuff.

For sports fans around the world, this is their day. A day, for them, the sports fans.

The anticipation, the anxiety, the confidence, the trash talk…it all leads to today. Gameday.

In college football, gameday goes by another name: Saturday. Here in Louisville, it can also be known as Tuesday, or Wednesday, maybe Thursday, but typically Saturday, when tens of thousands of University of Louisville fans flock to Papa Johns Cardinal Stadium to do what fans do: root, root, root for the home team.

They come in red, in black, meshy tank tops and weathered wife beaters. They paint themselves like warriors on the precipice of battle, or like birds with yellow beaks and bright red feathers, hoping for a chance to fly.

Then there is the ubiquitous hand signal that unifies them all: known simply as L’s up. Louisville fans use this sign like a badge of honor, a fraternity handshake of sorts that lets everyone know that they indeed belong. That they, are home. That they are in fact L, and at least in this moment in time, up.

But what would you do if you could not L?

(Ed.’s note: to get the full Rinaldi effect, keep this music playing as you read.)

Would it make you less of a fan? Does it mean you are not really a part of the club? Do you pee sitting down?

These are the questions Kyle Reed must answer, not just on gameday, but everyday. For Kyle Reed, you see, can not L.

[Kyle]: “I’m Kyle Reed, Louisville’s biggest fan. Go Cards, Go Krogerin. L1C4. And I suffer from acute carpal tunnel syndrome. I’ve managed to get by alright, I know I’m lucky to have the rest of me in working order…but it’s tough on gameday…when you want to L-up and…and it’s just not there. Best you can do, on a good day, is a lowercase ‘r’ lookin thing, sometimes it just looks like I’m flippin people off.”

There are millions of Americans suffering from carpal tunnel syndrome but perhaps none who suffer more than Kyle. “I ran a jackhammer for Metro for 11 years. My hands would hurt and lock up on me sometimes but I didn’t think much of it. Then one day about 8 years ago, my thumbs and index fingers just…gave out. It’s like they went to sleep and haven’t been heard from since.”

“Some people wish they could fly, or go invisible. I just want to L-up man. I just…I want my boy to see his dad L-up, one time.”

It’s an especially cruel twist of fate. Imagine, a pirate with no sword. A hen without any eggs. A stripper, with no pole.

“One particular gameday a couple years ago, we’d just scored a Touchdown and the guy behind me is like, ‘hey doofus, get your L-up or get the L-outta here.’ I tried, and sure enough, all I got up was my middle finger. So, we had it out. Got asked to leave.”

Asked to leave. Kicked out of his own home. For something, he could not control.

[Shelia Reed, wife]: “It got so bad, last year, when we was scorin all them points, everyone’s high-fivin and twerkin and got their L’s up, Kyle just got up and walked out. Said he was done with it, never goin back. But he settled down and we moved on. My heart just hurts for him. God, please send a miracle.”

Sure enough, earlier this year, God sent his miracle.

Reed has been meeting with a team of specialists who are prepared to perform a series of operations on his hands that could give him full usage of his digits, and maybe, get his L’s up.

“Doctors told me it’d be a longshot but I’ve been counted out my whole life and always seem to hit the board.”

Today is gameday. Today, after 4 grueling procedures and countless prayers, Kyle Reed gets to remove his cast and find out once and for all, L’s up, or L’s forever down.

At the hospital, Kyle struggles with his emotions, but his patience and perseverance, are soon rewarded. The cast comes off. It’s the moment of truth.

Finally, after 8 long years of anguish, of feeling like an outcast, of unintentionally flipping people off, Kyle puts his L up.

“Tell you what…(fighting back tears) that was, that was even greater than I ever imagined it could be. (now sobbing) I feel like…I feel like I can do anything now. I got my…I got my L’s up dad, this one’s for you, I know you’re watchin.”

Someone else is watching, too.

[Charlie Strong, entering the room with a teddy bear and balloons]: “See you got those L’s up man, that’s great. That’s strong, Cardinal Strong. I want you to have these balloons and this teddy bear.”

“Thanks so much Coach, you didn’t need to do this, you’re the greatest.”

“There’s one more thing…I want you to lead us out of that tunnel on Saturday, with them L’s ablazin. Can you do that for me?”

“Oh my God, you better believe it Coach! I’ll have my L’s up like this…”

So there Kyle Reed stood last Saturday, in the tunnel, L’s up high and perfectly pointed, emotions on his sleeve as he charged onto the field and into salvation. He was home again. 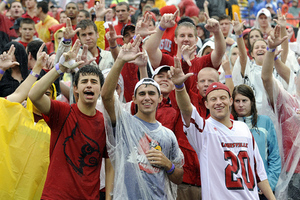 31 Comments for L is for Life