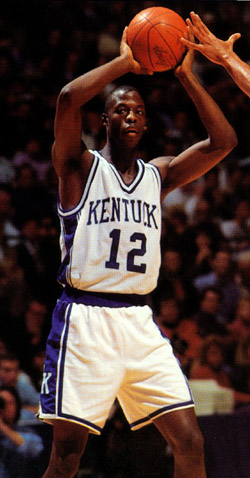 OK Rod Rhodes, you want to be an assistant at UK?

Come on Rod, I think it’s still too soon. A tad premature. After all, things with you and UK never really “worked.” I mean, it got so bad that Pitino basically had to show you the door. Because not only were you not good on the court, you weren’t much better off it. And you cried Rod. You cried on national TV (or maybe it was JeffersonPilot) after clanking some late game free-throws against Arkansas; thankfully, Anthony Epps was there to bail you out. I hope you thanked him for that. While we’re at it, I hope Jeff Brassow knows how much you appreciated his put-back off of your brick in the Maui Invitational against Arizona. But what I remember most Rod, is when you would have a breakaway dunk, and the fans are all buzzed with anticipation of a nasty throw down, but no, you’d just do the half-assed “hard layup.” What was up with that? We know you could sky, were we not worthy of it? Basically, you were a complete and utter flop–or more appropriately, you were an enigma. If you’re still handing out thank you’s, send one Antwan Barbour’s way, because you may only be the 2nd biggest bust. Oh, but I see, you want to coach at Kentucky now. You, Rod, on the sideline, in a suit, perhaps a clip board, and dropping knowledge dimes; I’m just not seeing it. Come on, you’re an assistant at Idaho St., even if you were a UK legend you would have a hard time selling that resume. I’m not saying Rhodes couldn’t land the occasional recruit or two, but so can plenty of other guys; guys who didn’t cry during games, or get waived by their college coach, or purposely break the hearts of the eager fans who only want to see a little hot sauce. It’s an ambitious target Rod, and I’m happy you’re beginning to find success and levelheadedness, but seriously man, seriously.

–The Intern as Jim Rome. Thank you.