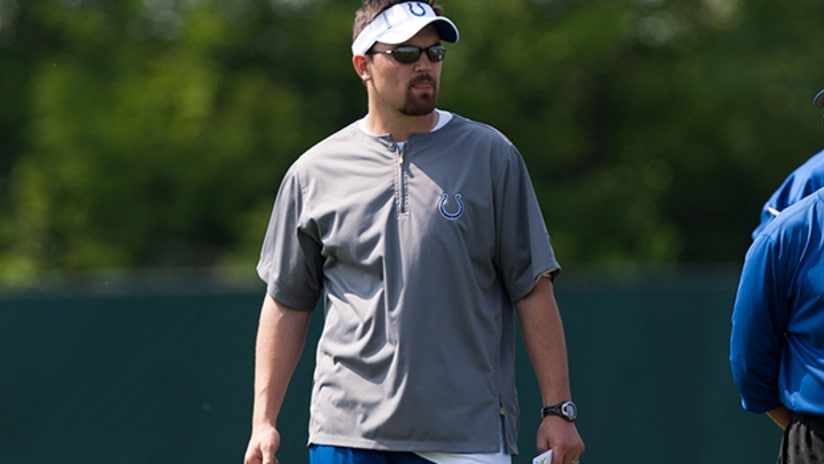 After an abnormal back-and-forth between Kansas City and Lexington, Matt House will leave Kentucky to coach the Chiefs with his mentor, Steve Spagnoulo.  If you’re going to lose somebody that helped transform your defense into one of the nation’s best, you might as well lose him to a Super Bowl contender.

This morning on KSR, Mark Stoops said he will take his time to find a replacement. He will weigh a potential outside hire and the viable candidates that are already on his staff.  The name that makes the most sense is Brad White.  Here’s why:

The last time Stoops needed a defensive coordinator, he hired a linebackers coach who had served on his staff as a position coach for one year.  White just finished his first year coaching outside linebackers at Kentucky.

Stoops and White have already developed a rapport, an essential aspect of the hire because Stoops is more intimately involved with the defense than most head coaches.  Hiring from within also means there will not be a dramatic shift in the scheme of UK’s defense.  Nuances will surely change, but the transition for players will be much smoother if Stoops hires from within.

In one year Allen transformed from third round draft pick to top three pick.  Of course, Allen deserves most of the credit, however, you’d be crazy to not give some to White as well.

Praised as a tactician, White’s six years of NFL experience brought something new to the table in 2019.  His expertise made him a hot commodity on the coaching search market this offseason.  A promotion to defensive coordinator would help deter more high-profile suitors in the future.

White is in his mid-30s and does not have any previous experience as a coordinator.  It’s a bit of a risky hire, but it’s not quite as risky when it’s the head coach’s area of expertise.  Unlike the offensive side of the ball where Stoops must hand over the keys, regardless of who is hired to be UK’s defensive coordinator, Stoops will be more involved with day-to-day operations than a typical head coach.  That should ease the learning curve for White and mitigate risk.

Matt House helped Kentucky tap back into the Georgia recruiting pipeline that was left vacant after the Rich Brooks era.  In 2019 he signed six from the state, three of which were linebackers.  The 2019 class has more players from Georgia than any other state.

An ideal hire needs a significant tie to a talented pool of recruits in the south.  Brad White does not check that box.  However, White does have ties to areas throughout the northeast, areas typically dominated by the team UK just beat in the Citrus Bowl, Penn State.  White’s efforts in the northeast have yet to yield any results, but he’s off to a decent start.  With a top three draft pick from the area to boast, Josh Allen, White convinced a pair of four-star skill players, Blake Corum and Curtis Jacobs, from the northeast to visit for Junior Day.

If Stoops were to promote Brad White to defensive coordinator, there’s still room to hire one more assistant coach.  White could also coach outside linebackers, inside linebackers or both.  What Stoops must emphasize is recruiting.

It’s the hardest part of the job and part of the reason why House left for the NFL.  It’s why Ed Reed likely won’t come out of retirement to coach.  It’s also why Jon Sumrall would be a great fit.  The former Wildcat letterman and current Ole Miss linebackers coach has extensive ties in the Deep South that would mitigate the loss of House in Georgia.

In an extensive interview with KSR, Stoops did not enlighten us with insight as to who exactly will be the next defensive coordinator.  All he could say is that he will take his sweet time finding the right man.  Brad White appears to be the frontrunner, but don’t count out his brother Mike, or somebody we’ve never heard of before.

After seeing how the Matt House hire turned out, I’m confident that whoever Stoops picks will be the right choice.