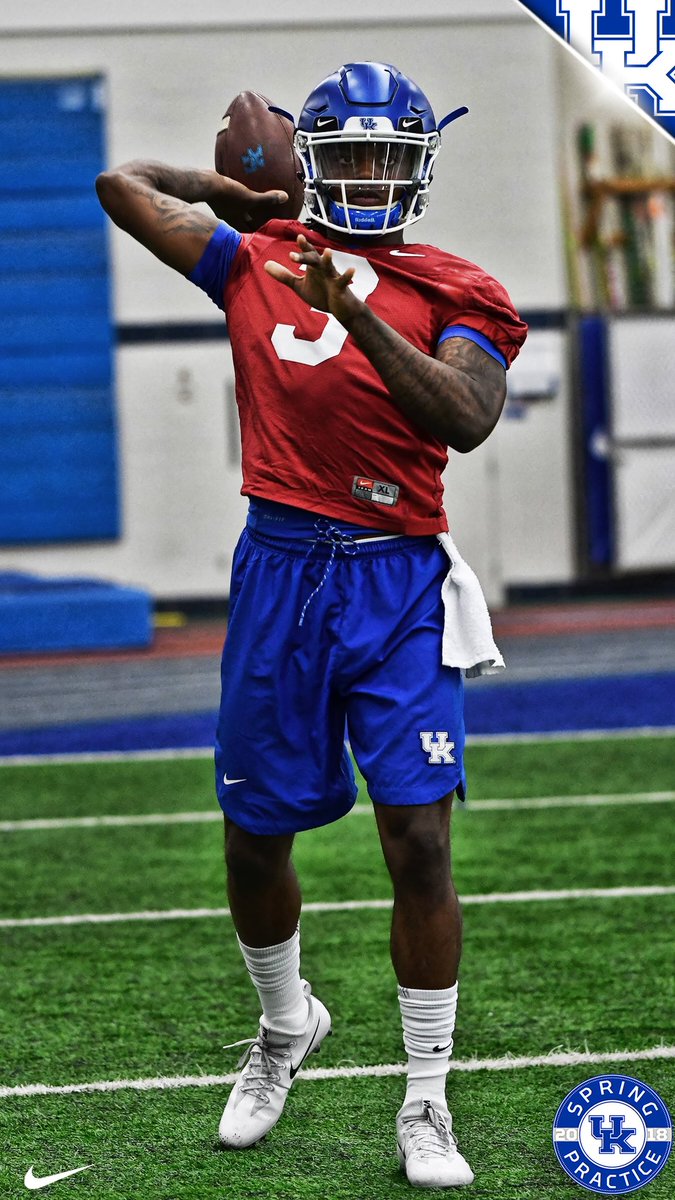 Kentucky has a rare luxury this spring, returning starters.  That can be said for about every position except quarterback.  All of the potential candidates are inexperienced, so Darin Hinshaw must be more patient than in previous years.

“Having somebody that hasn’t played in an SEC game, we have a learning curve that’s a little bit different than from what we’ve been in the last two years,” the passing game coordinator said after UK’s second spring practice.

After spending two seasons with the team full-time, Gunnar Hoak is taking all of UK’s first team reps.

“Gunnar’s doing a really good job,” Hinshaw said.  “Gunnar’s way ahead as far as understanding everything.  He’s making great decisions.  His accuracy on his throws are good.  I’m pleased with where he’s at.”

The second team reps are being split by JUCO transfer Terry Wilson and redshirt freshman Danny Clark.  After the lefty spent his redshirt season on the scout team, he shares a similar learning curve with Wilson.  Returning from injury, Walker Wood just recently began throwing medium-range passes and is not expected to take team reps until the middle of the spring season.

Terry Touchdown came to Lexington with lofty expectations, expectations he cannot meet right away.  Wilson must walk before he can run.  So far, so good.

“Terry Wilson’s at a really good place right now,” Hinshaw said.  “He’s learning.  The first day was very good.  This day was again good.  I’m very pleased with where he’s at right now. He’s got a long way to go.”

“There’s times where it looks like he’s spinning a little bit, which you would expect of anybody that’s learning a new offense, but I love his attitude,” offensive coordinator Eddie Gran said.  “He’s trying to be a sponge and he’s trying to get this thing.  It’s a crash course.”

The concepts Wilson is learning from Kentucky’s playbook are not new, but the terminology is.  He admitted it has not been easy.

“It’s been a learning experience,” Wilson said.  “You’re going to drown sometimes, but you just gotta adapt…and I feel like I’ve been adapting pretty well.”

While many fans dream of big plays from Terry Touchdown this fall at Kroger Field, he is not thinking that far into the future.  He’s not even thinking past tomorrow.

“I’m not looking at the end of spring ball.  I just want to focus on each day, focus on each throw and better myself for the team,” Wilson said.  “All I gotta do is just really learn the offense, just take in everything and enjoy the process.  It’s an awesome, awesome opportunity and it’s been good.”

While Wilson learns the offense alongside Clark, Hoak is doing everything he can to separate himself from the rest of the pack.  Right now the quarterback picture is cloudy, but Hinshaw expects to see exceptional growth from the quarterbacks throughout the five-week spring season.