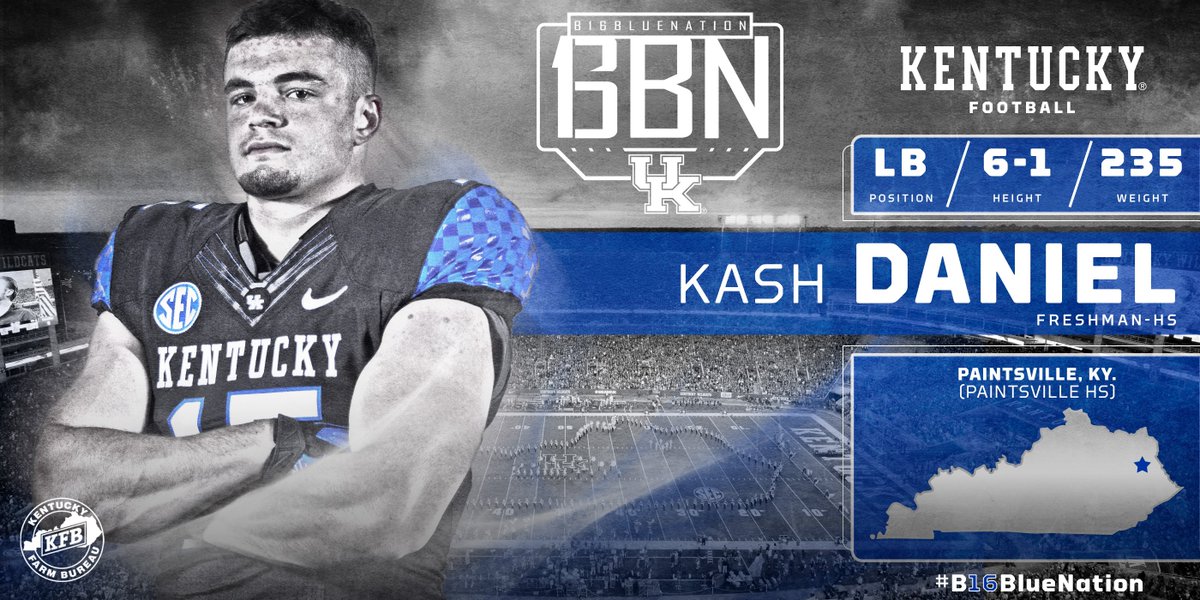 They’ve been on campus for a few days, but today, UK Football made its four early enrollees official, welcoming inside linebacker Kash Daniel, quarterback Gunnar Hoak, wide receiver Dakota Holtzclaw and center Drake Jackson to the program in a press release. The four will join JuCo offensive lineman Tate Leavitt, who signed with the program a month ago.

Here are Mark Stoops’ quotes about each:

Coach Stoops on KASH DANIEL: “We couldn’t be more thrilled to welcome Kash, Kentucky’s Mr. Football, to our team. He exemplifies the definition of a blue collar player.  He’s an extremely hard worker and he is very driven. Kash is what you’re looking for in a middle linebacker. He has the size, instincts and leadership you want in the middle of the defense.” 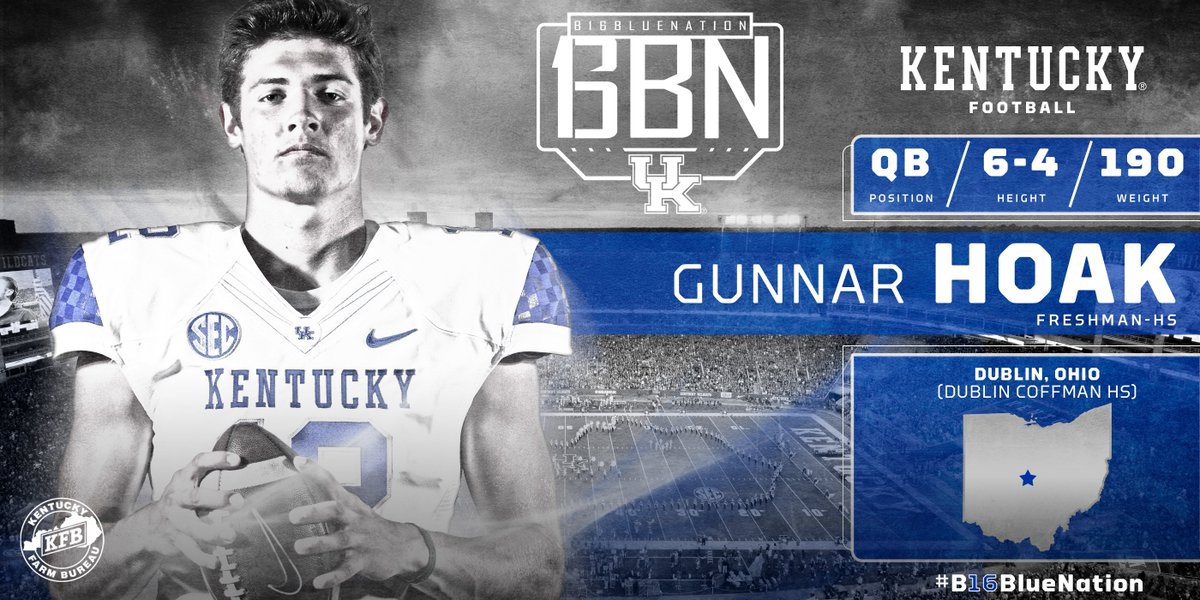 Coach Stoops on GUNNAR HOAK: “We’ve very excited to have Gunnar in our program. He has the mental ability and the technique a quarterback needs. He has a great throwing motion, great feet and he throws the ball on target. He has been a leader on a very good high school football program and it’s great to have him in here mid-year to begin learning the offense.” 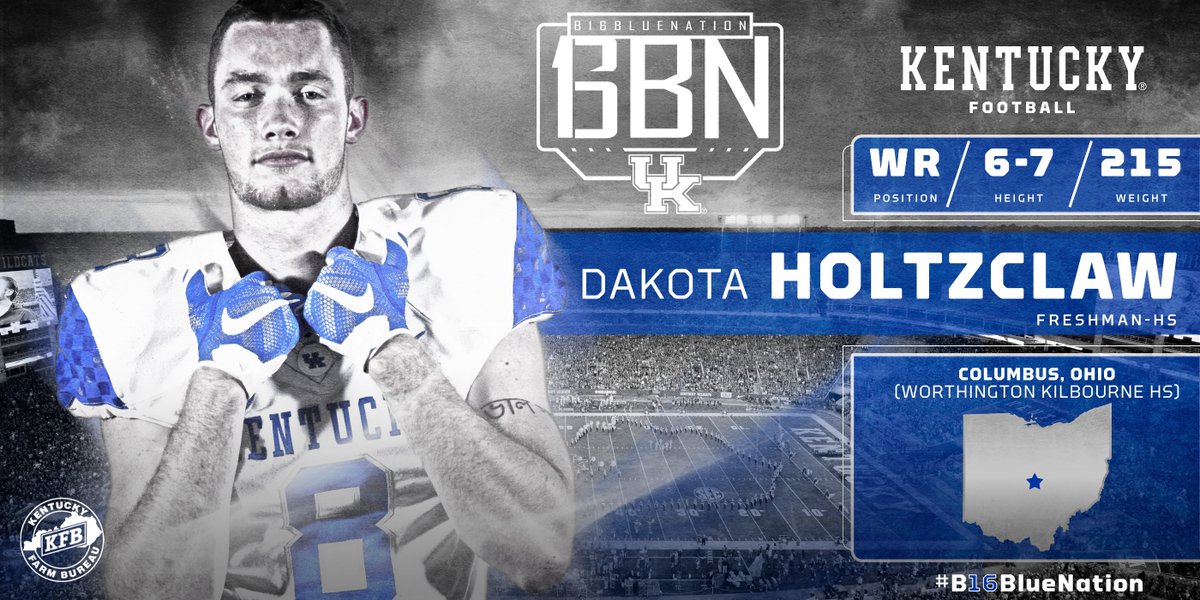 Coach Stoops on DAKOTA HOLTZCLAW: “Dakota has great size and speed. We saw him run track last spring and he ran sub-11.0 in the 100 meters several times. He’s a 6-7 receiver who gives us another big target on the outside. He has great hands and a large catch radius. We think he has the ability to develop into a really good receiver in our system.” 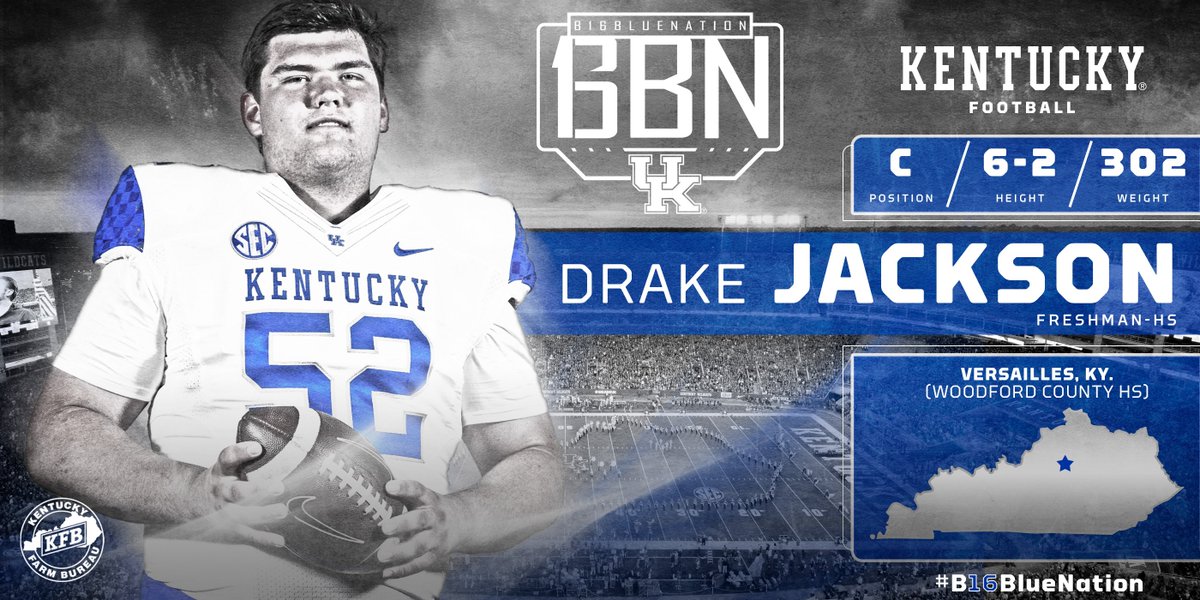 Coach Stoops on DRAKE JACKSON: “Drake is an outstanding lineman with polished technique for a player coming out of high school. He has the will to succeed and he thrives in a competition setting. Being elected captain of the West squad by his peers for the Army All-American Game just proves what type of person he is. He is a great leader and competitor.”

For their full profiles from UK, click through the jump. Also be sure to check out KSR’s take on each early enrollee by clicking here.

Kash Daniel, Linebacker, 6-1, 235, Fr.-HS, Paintsville, Ky. (Paintsville) — U.S. Army All-American, named a team captain for the West squad  … Helped the West win the game, 37-9 …  Named Kentucky’s Mr. Football and Kentucky Gatorade Player of the Year … Named first-team all-state by the Courier-Journal and The Associated Press … A 2015 Herald-Leader “Class of Commonwealth” honoree … Winner of the Paul Hornung Award, honoring the top player in the state … A two-way star as a quarterback and linebacker at Paintsville, helping the Tigers compile a 13-1 record and advance to the Class 1A semifinals … Rushed and passed for 2,245 combined yards (1,319 passing) and a 36 combined touchdowns as a senior (22 rushing TDs) … Defensively in 2015, he had 158 tackles, four fumble recoveries and four interceptions, returning a pair for touchdowns … Coach by Joe Chirico … Rated as a three-star recruit by 247sports, as the No. 13 inside linebacker and the third-best prospect in the state of Kentucky … A three-star prospect by Rivals, is tabbed as the 15th best inside linebacker and third best prospect in the state … Ranks as a three-star recruit by ESPN, No. 8 in the state of Kentucky and the 42nd best inside linebacker … Three-star prospect by Scout, ranks as the 23rd best inside linebacker in the nation … 247sports says, “Tremendous athleticism, great work ethic. He’s strong and he’s good laterally. He’s certainly elite laterally. The guy can go to Kentucky and be the leading tackler for the Wildcats three years. Just tough as nails, knows the game, is extremely talented and has a good upside. When you’re trying to play football in the SEC, you can never have too many guys like this.” … Also lettered in baseball and basketball at Paintsville … Picked UK over Michigan, Louisville, Marshall, Ohio, Purdue, South Carolina and Illinois.

Gunnar Hoak, Quarterback, 6-4, 190, Fr.-HS, Dublin, Ohio (Dublin Coffman) — Tabbed by ESPN as a four-star prospect, ranking No. 14 among quarterbacks nationally and No. 12 among prospects in Ohio … All-Central District Division I special mention as a senior … A three-star prospect by Rivals … Ranked by 247sports as a three-star prospect, as the No. 37 pro-style quarterback in the nation and as the 36th best prospect in Ohio … Had 1,798 yards through the air and 14 touchdowns with only six interceptions during his senior season … Was named Central District Player of the Year as a junior … Threw for 2,584 yards with 30 touchdowns and just three interceptions as a junior, leading the Shamrocks to an 11-1 record … Coached by Mark Crabtree at Dublin Coffman, which has produced seven Division I quarterbacks since 2003 … Crabtree says, “He’s very intelligent about the game of football. He’s got a very good arm, has a lot of nice touch and can throw all the various throws. The exciting thing is he’s only going to get better, too.” … Choose UK over Bowling Green, Buffalo, Cincinnati, Kent State, Syracuse and Toledo.

Dakota Holtzclaw, Wide Receiver, 6-7, 215, Fr.-HS, Columbus, Ohio (Worthington Kilbourne) — A three-star prospect by all four major recruiting services … Totaled 28 catches for 421 yards and a touchdown as a senior for Worthington Kilbourne … Had five catches for 141 yards and a TD in a week-four win … All-Central District Division II special mention as a senior, helping lead his team to an 11-2 overall record … Coached by Vince Trombetti … Three-star prospect by 247sports, which ranks him as the 39th best tight end in the nation and the 31st best prospect in Ohio … Ranked by Rivals as a three-star prospect and the 37th best player in the state … A three-star prospect by ESPN, ranking No. 20 among tight ends and 22nd in the state of Ohio … Tabbed by Scout as the 29th best tight end and the fifth-best tight end in Ohio … Scout says, “He has the ability to run by people, or go up and over defensive backs to get the football at its highest point. He should eventually be a first-down machine, and of course an excellent red zone target.” … Chose UK over Indiana, Louisville, Virginia Tech, Cincinnati, Duke and Ohio.

Drake Jackson, Center, 6-2, 302, Fr.-HS, Versailles, Ky. (Woodford County) — U.S. Army All-American, named a team captain for the West squad … Helped the West win the game, 37-9 … Two-time first-team all-state selection by theCourier-Journal and The Associated Press …  A 2015 Herald-Leader “Class of Commonwealth” honoree … A four-star prospect by all four major recruiting services who is tabbed by Scout as the nation’s top center recruit … Invited to Nike’s The Opening — the most prestigious football recruiting camp of the 2015 summer — and the Rivals 100 Five-Star Challenge … The nation’s second-best center, according to 247sports, which also ranks him as the second-best prospect in the state and the 140th best in the nation … Ranked as the second-best center and the second-best prospect in the state by Rivals after recording 163 pancake blocks as a senior … ESPN ranks him the third-best center and No. 2 overall in the state … Rated by Scout  as the 83rd best prospect in the nation … Coached by former UK All-SEC defensive end Dennis Johnson … Johnson says, “Good footwork, works hard in the weight room, is super-duper smart and asks a lot of questions about what to do, which is great because not many high school linemen do that. His mental capacity is way above most high school kids.” … The four-year letterwinner picked UK over Alabama, Florida, Mississippi State, Ohio State, Penn State, South Carolina, Tennessee and LSU.