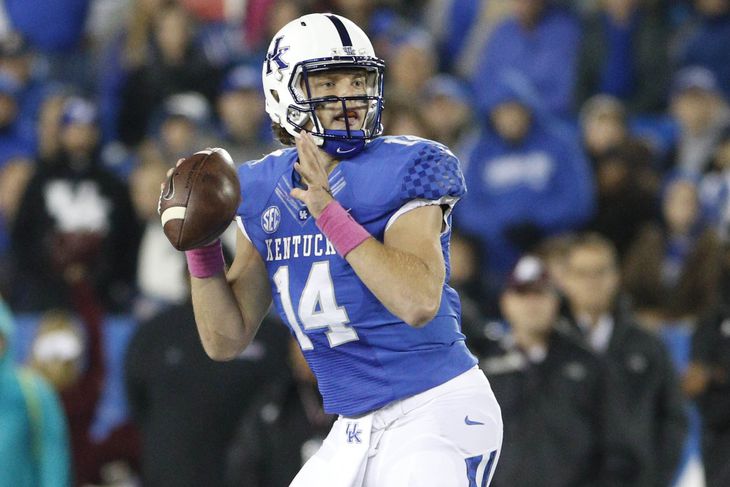 Tuesday of a bye-week gives us a moment to catch our breath after 5 pulse-pounding, blood pressure pumping, stress filled weeks of football. The Cats sit at 4-1 heading into next week’s Thursday night game against Auburn which is something we would have all signed up for when the season began. So what does the national media think of the upstart Cats? Here’s your weekly round-up of the where the pundits have Kentucky placed:

Kentucky narrowly avoided a disastrous loss to an FCS opponent, scoring two touchdowns in the final 4:59 of regulation and then winning it on Patrick Towles’ three-yard TD pass to Dorian Baker in overtime.

It was the fourth career 300-yard passing game for Towles, and it gave the Wildcats their fourth single-digit win of the season. Kentucky’s last six games have been decided by eight or fewer points.

The worldwide leader’s football power index has the Cats ranked 55th  and projects an overall record of 7-5.  Despite two more wins, the only team remaining on the schedule that Kentucky is projected to be the victor is against Charlotte which their model says we win 96% of the time. Vandy (47%), Louisville (44%), and Auburn (44%) follow as the other games that the Cats have a real chance of winning. Good thing these games are played on the field and not in a stats lab.

After the folks at ESPN put that downer on the back half of the season, the good guys of USA Today have Kentucky ranked the highest out of anybody. The Cats come in at #40 according to Paul Myerberg but not only are the Cats ranked higher than the other polls but their opponents are much lower.

Earlier this season UK received eight votes in the Coach’s poll which equated to  about 38th. This week they were back with 6 votes but that breaks out to 36th. Moving on up.

What do you think of Kentucky’s place on these rankings?