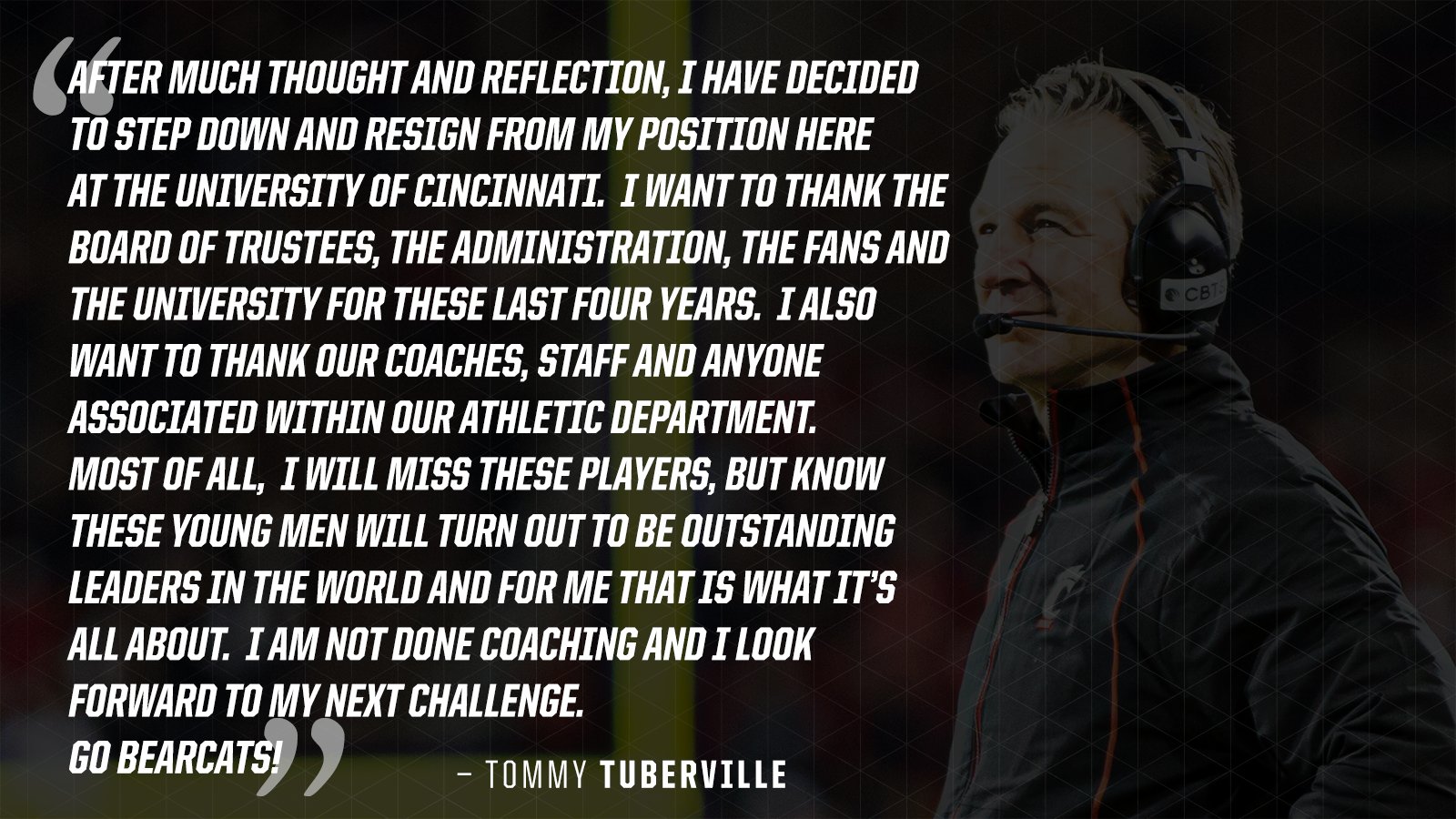 Though the writing has been on the wall for a while now, Tommy Tuberville has officially resigned from his head coaching position at Cincinnati. With a massive decrease in production from last season and plenty of head-scratching finishes, the veteran head coach decided to step away after four years with the team.

So what does this mean for Kentucky?

Well, it depends on who takes the open position.

Let’s look at the options:

Under Bobby Petrino, Brohm developed into an absolutely brilliant offensive mind at Western Kentucky, and it certainly showed when he was given the head coaching duties after Petrino moved on to Louisville. Brohm has become a hot name in college football after leading WKU to one of the most high-powered offenses in America, and many believe this may be the time he decides to take the next step up to a bigger school. The Bearcats are right up the road from home, and Brohm would be able to pick up where Eddie Gran left off in bringing a dominant offense to Cincy. Rumors are circulating that Brohm will be interviewing with Baylor, among some other big names, so I guess we’ll have to see how Cincy stacks up to the competition. He’s a hot commodity, and rightfully so, as Brohm is a stud head coach in the making. If his school of choice ends up being right up the road from Lexington, expect to see some major recruiting battles in the near future.

The former Kentucky offensive coordinator has absolutely dominated after taking over the head coaching position at Troy, and interest is starting to build from several schools across the country, including both Western Kentucky (should Brohm move on) and Cincinnati. After going 9-3 this season and cracking the top 25, he has proven he can get the job done at smaller programs and is ready to take the next step up. Both Western and Cincinnati would give allow him to be closer to home and build his own brand similar to what Brohm is currently doing at WKU. Should Cincinnati offer him the gig, he’d be able to go heads up with Kentucky in many recruiting battles in Ohio. If Brown gets the job at Cincy, you’d have to think UK would be adding them to the schedule in the immediate future, right? Brown vs. Gran would be fun to watch.

I mentioned it a few nights ago, but Eddie Gran will absolutely be getting some looks at head coach in the near future. Is that time now? Gran came from Cincinnati, where he was the offensive coordinator under Tuberville from 2013-2015, putting up record-setting numbers for the Bearcat offense. In 2013, Gran led the Bearcats to the best offensive production in the AAC with 471 yards a game, including 170 on the ground, and their most total yards in program history with 6,137. He’s a seasoned veteran, he knows the school inside and out, and has proven he can get the job done there. As awful as it would be for Kentucky, Gran may very well end up getting a hard look from his former school. Let’s just hope the Bearcats find their guy elsewhere.

I don’t know if there are any legs to these rumors, but a few outlets have reported that former Texas and Louisville coach Charlie Strong may be an option for the opening. He’d obviously be a pretty massive hire there, and would likely make Cincinnati contenders in the AAC in just a few years. He’d be able to recruit fairly well, and it’d make for some big headlines for sure, but it likely wouldn’t affect Kentucky much. It’d be fun to see though, at least.

If Cincinnati manages to grab one of these guys, things are going to get a lot more interesting in recruiting and scheduling in the next few years. Anyone but Gran, please.

13 Comments for Tommy Tuberville steps down at UC. What does it mean for Kentucky?