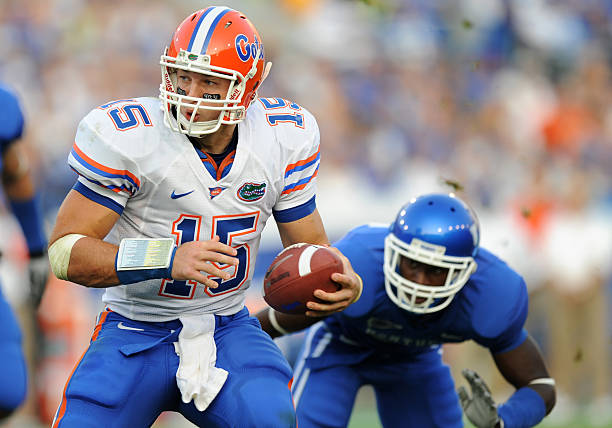 Back in 2007, the Kentucky Wildcats took the college football world by storm under head coach Rich Brooks. They marched their way into the top-ten of the polls, defeating elite opponents in No. 1 LSU and No. 9 Louisville, both at home. Quarterback Andre Woodson worked his way into Heisman contention and broke team records, the Wildcat offense had weapons all over the field, the defense had numerous future NFL players, etc.

It was a team the Big Blue Nation rallied behind, arguably the biggest fan-favorite of the last two decades. “Believe” was the team’s slogan, and the fanbase did just that every game along the way.

KSR talked to one of the biggest enemies of the program during that era, Tim Tebow, about the difference he sees in the 2007 Kentucky team he played against and the 2018 team he’s covering as an analyst for the SEC Network.

The two-time NCAA champion and Heisman trophy winner says the 2007 squad was loaded with talent, competing against the best of the best each week.

“That was a very good Kentucky Football team,” Tebow said. “They had firepower offensively. They had a few very good defensive players. We’re talking about a team with several players that were standouts in the NFL. A very good quarterback. That same Kentucky team, I think two weeks after we beat them, they beat LSU, who won the national championship. That’s a Kentucky team that week in, week out competed with the best in the country. And I think this team does that as well.”

Kentucky’s 2018 team, however, is a product of coaching longevity and elite development. As a result, we will see more of a consistent product year after year than that of the Rich Brooks era. They’ll be able to sustain that success from the start of the year to the end, something the 2007 squad could not accomplish.

“This team is a bit more run heavy, defense heavy,” Tebow said. “Now with more of the facilities, with Stoops, someone who has been here, I don’t think there’s going to be the highs and the lows that have been here. In 2007, that was such a competitive game, we maybe won 45-38, something like that? And then in 2008, I think we scored 70. So it’s like, where is that disconnect from 2007 to 2008 for that Kentucky team?”

Tebow had the timeline mixed up a bit, as the LSU upset victory actually came the week before Kentucky’s 45-37 loss to Florida on October 20. He wasn’t far off on the 70-point outing the year after, as the Gators defeated the Wildcats 63-5 in 2008. Regardless, the point remains; we saw the extremes, both good and bad, throughout the Rich Brooks era. An era with so much promise, especially with the 2007 squad, saw some of the best victories and worst defeats you can find.

That being said, the former Florida star believes those highs and lows are gone under Kentucky head coach Mark Stoops.

“That’s not going to be the case here with Coach Stoops, (one) because of the way he coaches defense, (two) the way he develops players, and (three) the schemes they run. I think that’s the difference between the Kentucky now and the Kentucky then,” he said.

And that’s no disrespect to the talented 2007 unit. The former Gator believes that team deserves an incredible amount of respect, even if their season fizzled out toward the end.

With a victory this afternoon, the 2018 Wildcats will tie the 2007 group in total wins and surpass their regular-season mark of seven total. They will do what the Woodson-led team could not with a win: Take home the SEC East crown and take on the best of the West in the SEC Championship.