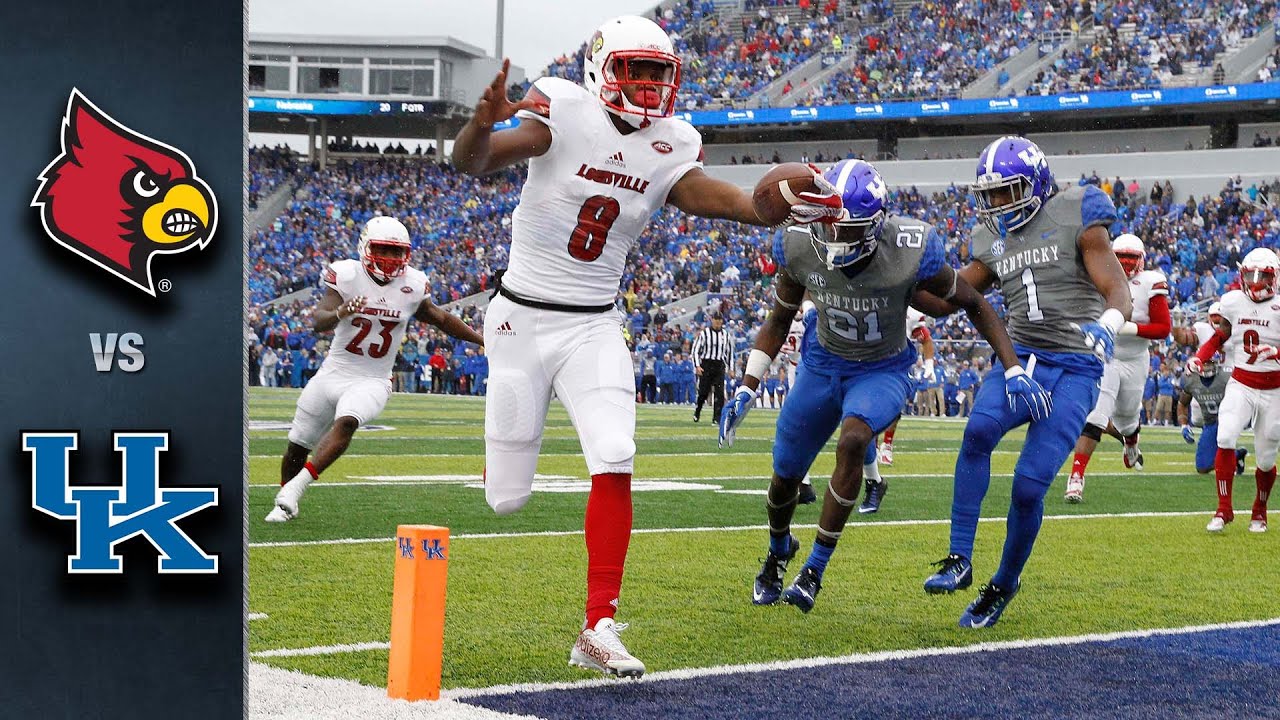 After what seemed to be the longest football offseason ever, time has flown by and we’re now just an hour away from kickoff of the regular season finale. Despite an atrocious start to the season,  Kentucky is bowling, and optimism is ridiculously high throughout the Commonwealth for not just these final two games, but well into the future of UK football. The team is returning nearly all starters next season, with just a few key players moving on via graduation or potentially the NFL Draft. Things are looking up.

That being said, there’s a game to be played today. A big one, at that.

It’s officially Louisville Hate Day, where it’s absolutely acceptable to let out some of that built up tension toward the most darling group of individuals in the bluegrass state. A win for the Cats would make it the first Governor’s Cup victory since 2010, improving Kentucky’s record to 7-5 and potentially moving the team up into the next tier of bowl games. If the 26.5 point favorite Louisville Cardinals come out on top, an Orange Bowl bid is fairly likely, despite officially being out of the running in the College Football Playoffs.

It’s time to talk about the reasons both teams will come out on top.

Why Kentucky will win:

We all know this is where UK’s bread is buttered. Kentucky has the 17th best rushing attack in America, rushing for nearly 250 yards per game, and that number just keeps improving by the game. Boom Williams and Benny Snell are the most dynamic rushing duo in UK history, and will certainly be fed the rock all day long against UofL.

I mentioned earlier this week that UofL has a stout defense, especially defending the run, but have yet to face an opponent with a competent rushing attack. 10/11 of UL’s previous opponents are ranked in the latter half of the nation in rushing offense, with Florida State being the outlier at 42nd in the country. Ever since UK found their offensive identity, there has not been one team able to slow down the Wildcat backfield, even facing stout rush defenses like Vandy and Georgia. After failing to face anyone of substance in this department, the Cardinals allow an elite Kentucky backfield to completely dismantle their defense.

UK establishes and dominates the run game, milks the clock, and keeps the ball out of the Heisman’s hands, they’ve got a real shot.

UofL ranks among the worst in the nation in turnovers and penalties, and the best way to shock the world would be to convert on these opportunities. If UK can win the turnover margin and commit fewer turnovers, it helps UK’s chances exponentially. As we saw last week against Houston, when something goes wrong for the Cards, it usually comes in bunches.

If the ball hits the turf or Jackson throws a few ducks in the air, Kentucky has to be able to grab them at all costs. Winning the turnover/miscue battle is absolutely essential, as they’re likely not going to beat them on a pure talent standpoint. Against Duke, UofL struggled when the game was “uglied” up, and the Cats will have to follow a similar blueprint. Pounce on every miscue handed to them, as it’s almost a certainty they’ll come.

Bobby Petrino has been relentlessly preparing all week long, going all out for his favorite game of the year. Reports are claiming the former Harley Davidson owner has lived in the film room and tinkered with play calls and trick plays this week, doing anything in his power as a coach to give his team the upper hand. (No word on if UK’s playbook was in play.)

But Petrino isn’t going to be out on the field.

Think of it this way. UofL fans, coaches, and players decided it was necessary to whine and complain when a meaningless Playoff Poll released two weeks ago after not getting a spot in the top four. Coaches went to media members, players vented on Twitter, and fans complained to anyone that would listen about how much the team “deserved” proper recognition, seemingly focused on a poll (pun intended) rather than an extremely challenging game being played on a short week of rest. They end up getting embarrassed by Houston, and their Playoff hopes crumbled faster than they gathered momentum. Michigan or Ohio State is guaranteed to lose, meaning UofL would’ve almost certainly slid in the top four if they took care of business and won out the remainder of the year.

This could take a similar turn to Florida back in 2013, when the Gators lost a game late in the year and were forced out of the Championship race. They took on the Louisville in the Sugar Bowl, a game they felt they didn’t deserve to be in, and got beat soundly. What exactly are the Cards fighting for right now? Pride?

Right now, UK has absolutely no weight on their shoulders. They’ve been playing with house money since the Missouri victory, as a bowl has been locked up for several weeks now. Did you see the predictions by the ESPN analysts? 63-17? Aside from a few SEC analysts last night, absolutely no one is picking the Cats to win this game, so there’s no pressure. Kentucky is loose, while the Cards are bitter about the Playoffs. It’s rivalry week. Who knows?

Why UofL will win:

The second Lamar Jackson came in to replace Kyle Bolin last season, a flip was switched. The Cards erased a 21-point deficit to beat UK 38-24 at Commonwealth Stadium, and a star was born. The Cats let Nick Fitzgerald, Josh Dobbs, and even Austin Peay’s JaVaughn Craig run all over them, what’s going to happen when the most dynamic running quarterback in the nation lines up across from UK’s defense? Oh, when he gets tired of running on the defense, he has the ability to sling the rock all over the field. It took a dominant Houston defensive line to limit Jackson’s production, but Kentucky’s front seven doesn’t come close to the talent on Houston.

If UK can’t put pressure on Lamar Jackson, it is going to be a long day. Plain and simple. Kentucky absolutely cannot give up the outside edge to the Heisman candidate, as he’ll put up a million yards on the ground, and then gash you for a million more through the air when you cheat over in an attempt to stop him.

Kentucky has yet to prove they can stop a mobile quarterback, so why would that stop today?

Kentucky’s offense fails to get going

UK will be going up against a dominant rush defense featuring stud linebackers Keith Kelsey Jr. and James Hearns, along with NFL-caliber defensive end Devante Fields. Strength of schedule has not helped on a publicity standpoint, but that doesn’t take away the talent on that UofL defense. This is their first opportunity against an elite backfield, and they’ll be looking to make a statement.

If UK relies too heavily on the run, they become one-dimensional, something the Cardinals have been preparing for all week long. They’re not accounting for Stephen Johnson to make plays, they’re expecting Benny Snell and Boom Williams to touch the ball on every play. If running the ball fails early, and three-and-outs pile up, this game could get ugly fast.

In many aspects, the Louisville offense stacks up similarly to Tennessee’s, which isn’t necessarily a good thing. UT averaged over ten yards per play, with home run balls coming in bunches against a lost Kentucky defense. It was a pitiful showing, as UK yet again proved they couldn’t do a thing to stop a mobile quarterback.

Louisville loves to show off their high-powered offense, and you already know Bobby P is drawing up some ridiculous plays in an attempt to put a hurting on his biggest rival. If UK bites on some of these trick plays, on top of the Cards’ regular offensive production, this score will not be close.