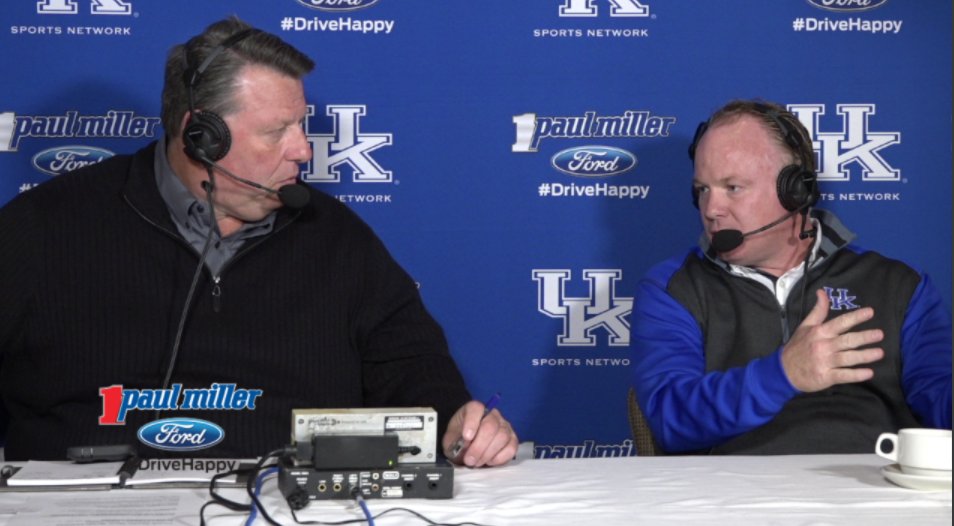 “We’re beat up pretty good, but you know everybody is this time of year.”

The Cats missed quite a few people in today’s practice.  One of those is wide receiver Kayaune Ross.  Ross has been “banged up” the last few weeks, he didn’t practice today and his status doesn’t seem promising for Saturday.

“Generally it’s with a drop back pass.  These were designed quarterback runs.  There’s no spying there.  There’s way too much stuff going on.”

One caller asked if they ever use a QB spy against running quarterbacks, but Stoops explained those can only be used in obvious passing situations.  Kentucky didn’t create any of those, forcing Tennessee into only five third downs.

“Just tell him to pooch punt it every time and it will go 50 yards.”

We aren’t the only one who’s noticed that Grant McKinniss’ best kicks only come when they need a short kick.  Other than the joke, Stoops said they’ve tried to change things up to produce a different result, but the only time they tried a rugby punt, Missouri scooped it and returned it the one yard line.

“Let me just tell you one thing coach: in this league, take the points.”

That was the advice Brent Musburger once gave Mark Stoops.  On the Cats’ 4th and 2, he thought about going for it, but decided he couldn’t leave points on the board.  “I would’ve kicked myself for another year had we not gotten anything there.”

“I am proud of the fact that we’ve done something that we haven’t done in ten years.”

It’s Kentucky’s best finish in the SEC since 2006.  They’re slowly climbing the SEC ladder, but they must cap it off with a win this Saturday to reach a bowl for the first time since 2010.

“Please keep the field goal unit on the sidelines with you!”

On this morning’s edition of KSR, Steve said he probably wasn’t going to call into Stoops’ show.  He did anyway and was pretty passive aggressive.  On top of that quote, he also said that if the Cats lose to Austin Peay, “You probably won’t have this show next week.”