When Kentucky and Louisville take the field in Saturday’s Governor’s Cup, there are a few players that almost ended up on the other sideline.

A pair of Louisville defenders that will give Kentucky fits were close to committing to Mark Stoops back in 2013.  Stoops’ leader in his first season was senior Avery Williamson, but there was little depth behind him.  Desperate for linebackers, Stoops used his Florida State connections to try to lure to elite linebackers to Lexington — James Hearns and Keith Kelsey Jr.

Tallahassee native James Hearns was considered a 4-star prospect, a consensus Top 300 player in the class.  Stoops was able to get Hearns to officially visit Kentucky at an impeccable time — just a day after he decommitted from Florida.  The stars seemed to align, but it didn’t work out for UK.  This season Hearns has 8 sacks, 11 tackles for loss and 5 forced fumbles.  Not too shabby.

Losing Hearns hurt, but Keith Kelsey is the thorn that will never leave Stoops’ side.

Keith Kelsey Jr. wasn’t ranked as high as Hearns, but the Gainesville native had even more upside.  An exceptional athlete, he could move like an outside linebacker but stop the run like an inside backer.  He was the perfect player for Mark Stoops to build his defense around.

Instead, we got SIKED!

The stupid SIKE! cuts deep, real deep, especially when you consider just how good Kelsey’s been.  Kelsey was a first-team All-ACC selection last year after leading Louisville in tackles with 107.  This year he once again leads Louisville with 72 tackles.

However, we cannot forget that this ‘what-if’ game goes both ways.  Mark Stoops signed a few recruits coveted by Charlie Strong.  The careers of Jason Hatcher and Alex Montgomery didn’t go the way we hoped, but there are a pair of players on offense that will make a difference in Saturday’s Governor’s Cup.

Louisville’s offensive line has been their most criticized unit since Petrino took over.  Fans have frequently blamed Strong for “leaving the cupboard bare,” but it wasn’t from a lack of effort.  Strong pushed his chips all in on Kyle Meadows back in 2014.  Instead, he’ll be starting at right tackle for Kentucky.

The Kentucky rushing attack will once again be the heart and soul of the offense, but to put the Cats over the top, they’ll need to hit a few homeruns in the pass game (especially if Josh Harvey-Clemons is out again).  The man who will do it for the Cats is Jeff Badet.  Badet averages 24.66 yards per catch, the second-best in the nation.

In the summer before his senior season, Kentucky wasn’t involved in his recruitment.  He told the Orlando Sentinel in July of 2012:  “Louisville is standing high, actually No. 1 right now.” 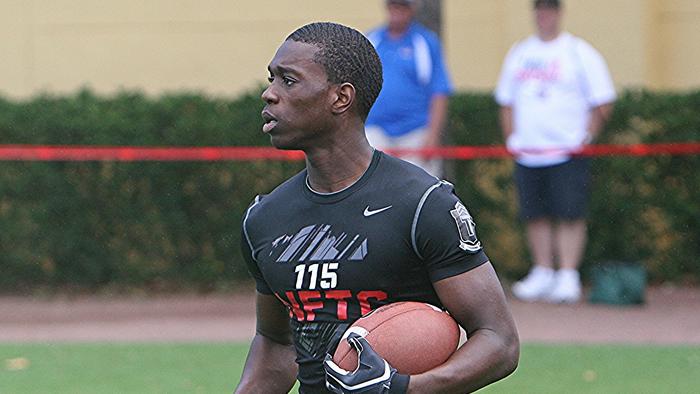 Back when Badet liked Louisville in July 2012, via Chris Hays of The Orlando Sentinel

“I just remember sitting there watching the Louisville vs. Florida game, and I saw Louisville playing really good.”  Badet said earlier this week he reacted like any young teenager would.  “I was like ‘oh man, I want to go to that school.'”

Badet only had three minor offers when Charlie Strong extended him a scholarship offer.  It almost worked, but the Cats had an ace in the hole: Jojo Kemp.

“I was really basing my decision off Jojo.  Wherever he went, I was going to go,” Badet said.

The Kentucky coaches never thought it was a done deal, going to great lengths to ensure Badet would commit to Kentucky.

“Most people don’t know, but I came on my visit, left Sunday.  Coach Stoops brought the whole staff and was at my house that Monday, the next day.”

Recruiting is a fickle unknown.  Stoops’ last-minute move is the type of bold move that can affect the program for years.  You can play ‘ifs and buts’ all day, but I wouldn’t trade any of these Cats for one of those Cards.

2 Comments for The Ones That Got Away