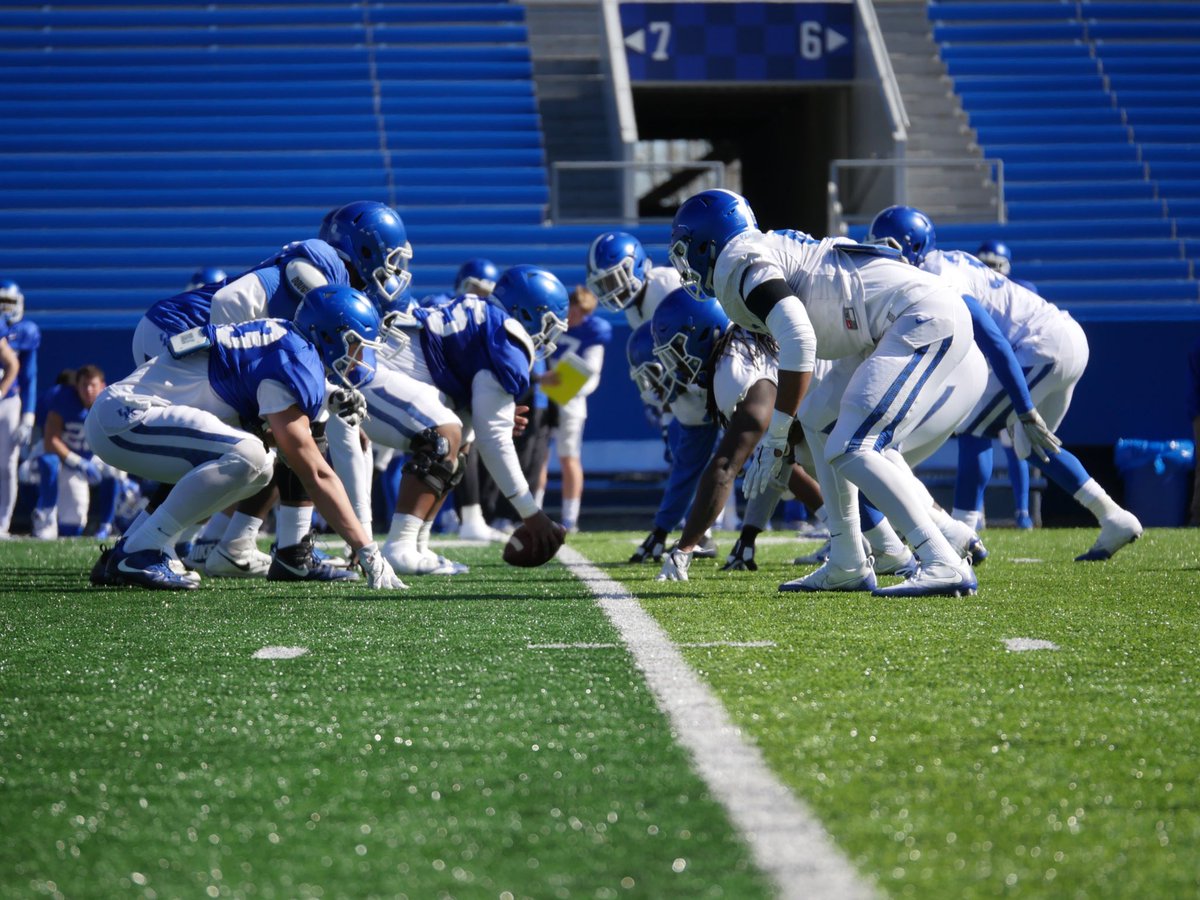 Philosophical Changes on the Defensive Line

There’s no denying Kentucky’s weak link on the 2016 team was the defensive line.  The addition of Derrick LeBlanc made the unit more active in practice and philosophically changed their approach in the trenches.

“We’re working on more fast-pace, penetration style,” T.J. Carter told Freddie Maggard.  Kordell Looney added: “Coach LeBlanc wants us to move faster, get more in, in the same amount of time. So get 10 minutes of work in 8 minutes. He just wants us to play faster.”

Rather than creating space with the offensive lineman, then reading what’s happening in the backfield, LeBlanc wants to play more aggressively be penetrating the assigned gap to create chaos behind the line of scrimmage.  For a young unit, it simplifies their assignment and allows them to play without thinking.  It should create more tackles for loss for the linemen without slowing down the linebackers.

It’s a storyline that can be written every year.  What makes this year different than the norm is that Kentucky’s bowl game gave the team very little time away from the football training center.  Their longest break since August of 2016 was the week off for Spring Break.  The constant training has worked for the guys who needed it most.

Stephen Johnson’s durability was a question mark last year.  He’s eating 5,000 calories a day with a workout plan to add mass.  Chris Westry’s sophomore year wasn’t explosive as his freshman year, but the long corner has filled in to look like a much different player than he did in his first two years.  Naquez Pringle has tightened up; better conditioning will keep him on the field longer.  Josh Allen has transformed into a freak, nearly 50 pounds heavier than he was when he arrived on campus.  At inside linebacker, Jordan Jones’ only problem was his size, but that’s no longer the case.  His backup, Eli Brown, needed to gain weight to earn playing time and he’s done just that. 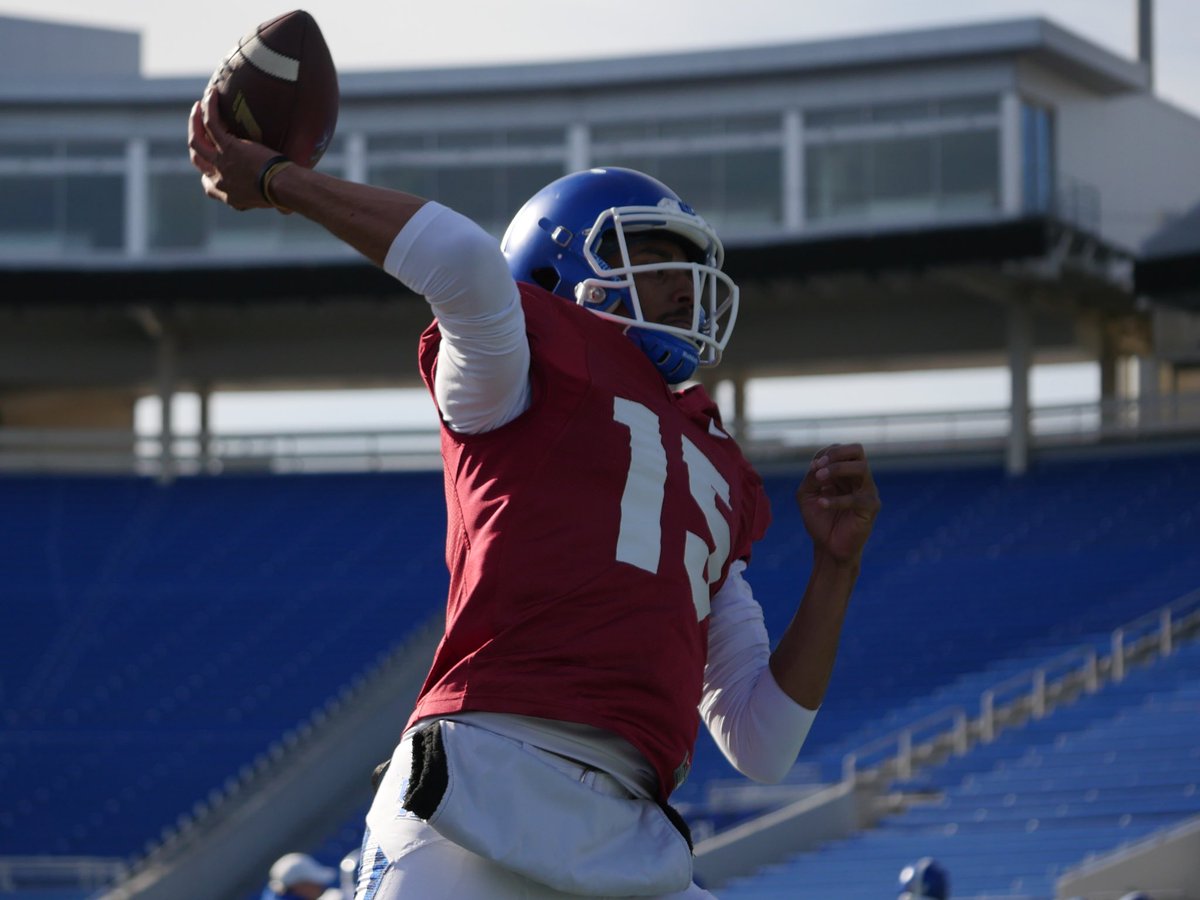 Normally we spend most of spring practice discussing a quarterback competition.  The return of Drew Barker is encouraging but it does not diminish the fact that this is Stephen Johnson’s team.  His physical improvements are important and necessary — quicker release, bigger body etc. — but his leadership is exactly what this team needed.

It’s easy to be “the guy” when things are going well.  How a person reacts when faced with adversity reveals character.  Johnson does not shy away from the challenge when the ish hits the fan, like it did during Saturday’s scrimmage.

“It’s all on me.  This is my offense.  This is my team,” Johnson said after the offensive beatdown.  “I have to be able to bring our guys up when we’re in a little lull like that.  That’s really all on me.”

Last year it was the Josh Allen and Denzil Ware show.  Luckily, injuries never kept them off the field for long.  If  it did, UK’s only option was a late-arriving JUCO transfer, Jordan Bonner.  Mark Stoops addressed the need by signing two studs in the 2017 class — Joshua Paschal and Jordan Wright — but this spring proved they will not be needed immediately.

Stoops believes the only good way to learn the difficult position is by getting a ton of practice reps and that’s exactly what Bonner, Jamar “Boogie” Watson and Jaylin Bannerman got this spring.  As Ware missed Saturday’s practice to deal with a personal issue, Watson filled in seamlessly.  He didn’t play like an all-star, but he did not disappoint; he played sound, disciplined football.  Paschal, Wright and Co. will need a ton of reps to be game-ready.  In the meantime, Bonner, Watson and Bannerman will be formidable reserves behind Allen and Ware.

Aggressiveness from the Wide Receivers

It’s hard to quantify this intangible for a position that isn’t defined by tenacity.  Still, you see the receivers playing much more physical to get separation from UK’s talented cornerbacks.  They are attacking the ball with their hands, a basic fundamental that is much easier said than done.  Many of UK’s drop problems can be credited to simple stuff: letting the ball come to them instead of attacking it or not watching the ball all the way into their hands.

Three players consistently played aggressive in their routes on Saturday: Dorian Baker, Charles Walker and Clevan Thomas.  When the ball went their way, I was confident they’d make the play, unless the defender made an incredible play.  There were also early reports that Kayaune Ross and Tavin Richardson caught difficult “money balls” when the offense needed them to on third down.  If the receivers makes in-game mistakes, they will be aggressive mistakes, a step forward for Lamar Thomas’ unit.