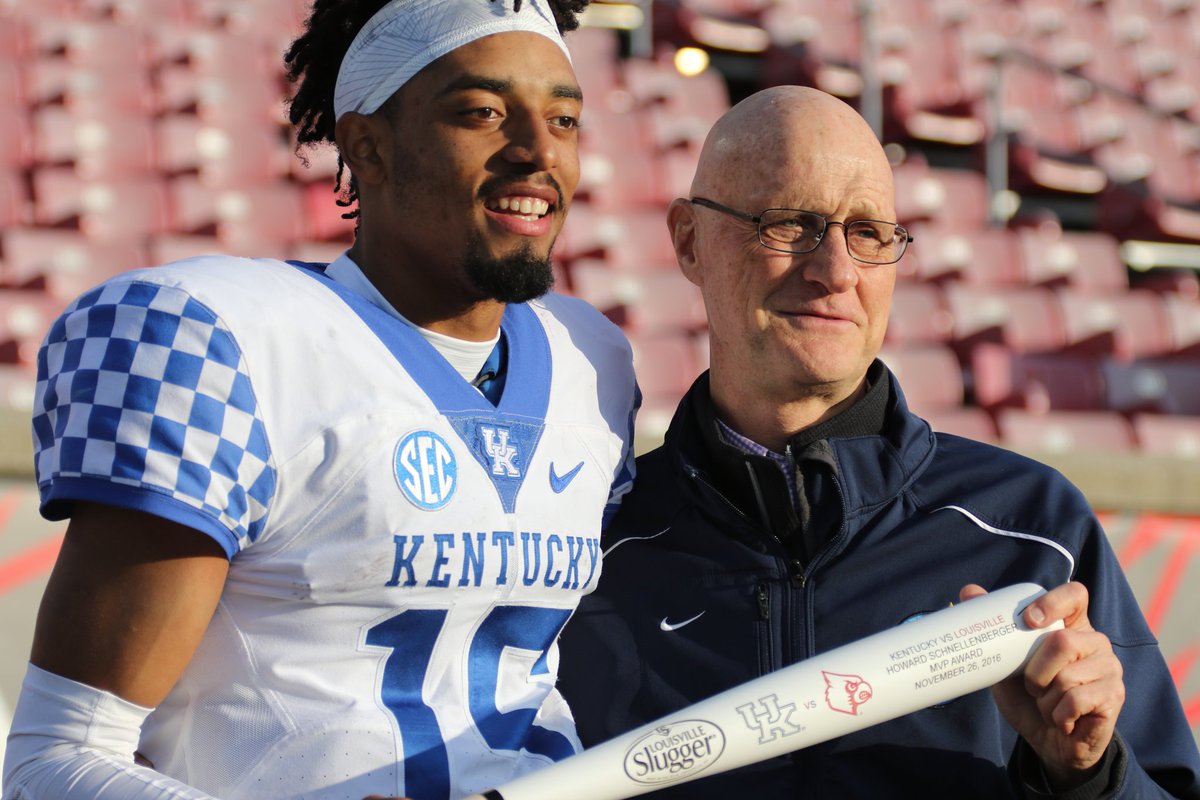 When Eddie Gran and Darin Hinshaw were first hired at Kentucky last offseason, their first task at hand was to find a backup quarterback to replace Patrick Towles and Reese Phillips, the former 2nd and 3rd string QBs who decided to transfer out of the program.

It was extremely late in the recruiting process, with most top-tier prospects already committed to other programs, so options were extremely limited. Rumors began spreading that they had honed in on a three-star guy named Stephen Johnson out of the College of the Desert in the JUCO ranks, best known for his running ability and his poise under pressure. Kentucky managed to bring him in for a visit, and after talking it over with his family, he decided to call Lexington home.

When Johnson signed, many expected him to just be used as a 3rd-and-short running threat, with a few goal-line opportunities throughout the year. Mostly, though, he would just be there for emergency situations behind the clear-cut starter, Drew Barker, who had reportedly separated himself as a team leader both on and off the field.

Reports surfaced that those in Johnson’s circle were upset the JUCO transfer had not been given the proper opportunity to win the starting job, as it seemed to be Barker’s to-lose going back to last season following Patrick Towles’ crumble as the team’s “guy.” Apparently close family and friends felt Johnson had the talent to compete in the SEC and wanted a true QB competition leading up to the season, but when things were in question, “Stay the course” was a common phrase thrown around at the time. Johnson was content with his position, and he did just that, stayed the course.

Following two atrocious losses to start the season, and a back injury for Drew Barker following the opening drive against New Mexico State, many were ready to call the season. Stephen Johnson entered the game down two scores, but managed to put up stellar numbers and lead the team to a 62-42 victory in an offensive shootout.

“It’s just New Mexico State,” they said. “UK won’t be able to win games with a backup QB and an awful defense against high-caliber SEC opponents.”

Many considered the South Carolina game the following week a make-or-break game for Mark Stoops and the Kentucky Wildcats. UK loses to the Gamecocks, and many thought it was guaranteed Stoops would be out as head coach. Awful rumors began spreading about Stoops, pushing this agenda forward to an unprecedented extent. GoFundMe pages were made in an attempt to raise money to pay off the head coach’s expensive buyout. The football program was in shambles, to put it lightly.

Despite the negativity surrounding the program, Stephen Johnson ran out there and took the opening snaps against South Carolina, and from there, took on the role as “game manager.” He wasn’t flashy, he wasn’t turning any heads with ridiculous throws or runs, but he got the job done and led the team to victory.

After the South Carolina win, Johnson followed it up with huge victories in three of his next four outings, progressing in each performance. When he’d make mistakes, he’d do whatever he had to do to fix them, developing his craft nearly every time he stepped on the field. Turnovers declined by the week, questionable throws came at a minimum, and highlight-reel caliber plays spiked.

Before we knew it, the Cats were out to a 5-3 record with a home stand against Georgia coming up and a tough road matchup against Tennessee to follow. Two games where UK maintained less talent than their opponents, yet the Wildcats managed to have a fighter’s chance in both outings. The Georgia game came down to a game-winning field goal as time expired, where a dropped touchdown throw and a hold on a made field goal were the difference makers. Against Tennessee, UK led in every major statistical category, and if the Cats don’t go 1-5 in the red zone, they likely win that game, as well. Two major challenges, yet Stephen Johnson and the Kentucky Wildcats were in position to win both.

Last weekend against Austin Peay, Johnson’s knee was banged up and the QB was available for strictly emergency purposes. Luke Wright got the start, but crumbled under pressure and the Governors jumped out to a 13-point lead. Like in his debut, Johnson came in (injured, at that) and erased the deficit, leading the Kentucky to 49 straight points and the victory to help the Cats become bowl eligible for the first time 2010.

Fast forward a week, where Johnson would be participating in one of the greatest rivalries in all of sports. Future Heisman winner going heads up with the guy many felt would be used as a practice dummy to emulate Jackson in practices as a mobile quarterback. Absolutely no one truly felt UK had a shot.

And then Johnson flipped the script on the entire nation.

While Lamar Jackson was focused on giving Heisman poses almost every time he touched the ball, Stephen Johnson put up one of the most dominating performances by a UK quarterback in recent memory. He slung the rock for 338 yards and three touchdowns to go with 83 yards on the ground, claiming the Schnellenberger MVP Award for the Governor’s Cup most outstanding player in the process. He put the ball right on the money nearly every time he released the ball, escaped the pocket when pressure ensued, and silenced the Papa John’s Cardinal Stadium crowd more often than not. When the weight was placed on his shoulders, when the team needed a play to keep momentum alive, the JUCO transfer made it happen. He had the “it” factor we haven’t seen in a Kentucky quarterback in who knows how long.

UK defeated the #11 ranked Louisville Cardinals 41-38, and it absolutely would not have happened without Johnson under center. The quarterback out of Rancho Cucamonga, CA placed himself amongst UK football greats with this performance alone, and that’s not an exaggeration. He had the most yards against the Cards since Jared Lorenzen in 2000, helping lead Kentucky to their first victory against Louisville since 2010 and the most wins in a regular season since 2007. It was a team effort, without question, but Stephen Johnson managed to outplay the Heisman trophy winner.

If you think about the team UK just defeated, it’s almost unfathomable how unlikely this result actually is. The Wildcats were considered 29-point underdogs right before kickoff against a team that was one game away from competing in the College Football Playoff, ranked #11 in the nation and bring forth the most electrifying player in all of football. UofL has been funneling guys into the NFL for years now, and this team was no exception in terms of professional talent. That defense was stacked with guys that will eventually be playing on Sundays, yet Johnson failed to hit the ground once. He was never phased, never let his emotions get to him, and he put on an absolutely remarkable show.

Johnson has not been perfect by any means. He’s turned the ball over a great deal of times, he’s missed throws on occasion, and has taken unnecessary sacks to force a surplus of groans throughout the Commonwealth in many games. Do you guys remember the Vanderbilt game when it seemed that kid couldn’t complete a pass if his life depended on it? There have been ups and plenty of downs in his time on the field, but one thing remains consistent in what Johnson brings to the table:

Saturday’s victory just so happened to be a little bit sweeter than the rest.

19 Comments for Thank you, Stephen Johnson.