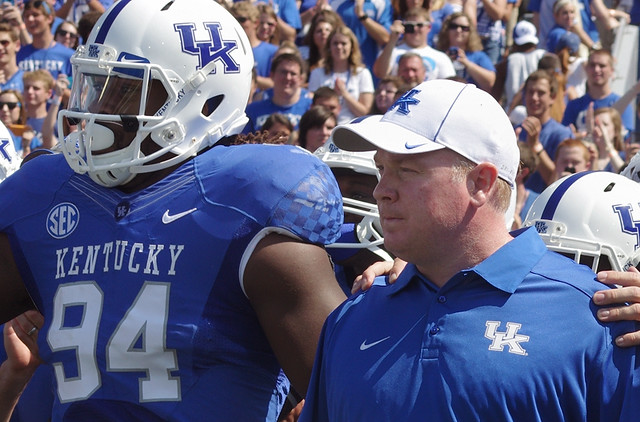 During this morning’s weekly press conferences, both Charlie Strong and Mark Stoops refused to downplay the importance of Saturday’s game. Stoops said that while every game is important, he’s never going to shy away from a rivalry:

“Well, again, our players need to understand that every week is important, and we will be very systematic in our approach. But I’m never going to shy away from a big game and a rivalry, let’s put it that way. We know it’s important.”

Charlie Strong agreed, telling reporters that this week’s game carries “a little more significance than others”:

“It’s a major test this week for us. If you look at our schedule, some games carry a little more significance than others and this is one of them. This isn’t just a rivalry game, but our first road test.”

How about the players? Senior running back Jonathan George said he’s ready for one last shot at the Cards:

“It’s a bitter rivalry and the word ‘love’ won’t be thrown around too loosely when you put both teams together in the same sentence and you know we’re going to come out this week and senior leaders, older guys such as myself need to kind of put a little extra emphasis on this game because it is a big game. It’s the Governor’s Cup, it’s basically the title for the state, so we need to come out and be focused and be ready to play Saturday.”

George is also doing his part to educate the new players on the importance of the annual in-state showdown:

“I think when those guys first got here, when they first got here, we kind of emphasized kind of like the basics of Kentucky football and beating Louisville is one of those main goals and I feel like guys know by now from some of the things you see on social networks and you hear people on campus talking about it and if you’re on Twitter, you’re seeing it right now: Louisville week and Louisville hate week and stuff like that, so I feel like the freshmen have a good gist of what this game means to our program.”

Georgia native Bud Dupree admitted that because he’s not from Kentucky, his dislike for Louisville isn’t as strong as some of his teammates; however, he says getting the Governor’s Cup back is a huge deal:

14 Comments for Stoops, Strong, and players not downplaying the rivalry