We are just a few short minutes from kickoff of the 2014 Blue/White Spring Game.  Drew Franklin and I are set to break down all of the happenings from around the under construction Commonwealth Stadium.  With half the stadium cut off, the available seats are nearly full.  The Blue squad will be the starters, led by Patrick Towles at QB.  Sit back, relax and enjoy!

Somehow, the pregame fireworks never fail to scare a few media members.  The Cats are ready to take the field.

We were treated to a beautiful rendition of the national anthem by Marlana VanHoose, one the best voices in BBN.  It was Marlana’s first time singing in Commonwealth Stadium; she usually sings one or twice per season at the women’s basketball games.

If you didn’t catch Marlana’s story on E:60 recently, stop what you’re doing and watch it now.

The cannons just exploded to start the game and Nick jumped four feet in the air. Some guys just can’t handle UK football.

Patrick Towles is your starter. Will he hold onto it through the fall?

Towles was patient in the pocket and it worked.  He hit Jojo Kemp as a safety valve before Jojo made multiple people miss on a GIANT gain down the left sideline.  He quickly scored out of the no huddle on a rush to put the Blue on the board.  The drive barely lasted 2 minutes in the no huddle, covering 70 yards before Jojo found the end zone.

Za’Darius isn’t holding back today.  The manimal at defensive end starts his Senior year with a batted screen pass (forcing Reese to catch his own pass), followed by a sack.  Not too shabby.

It’s clear UK is looking to push the tempo this season. No huddle, hurry-up offense — all damn day. This is part of the reason Jalen Whitlow transferred; he doesn’t fit into the system UK hopes to run. Quick, accurate passes and then sound the sirens.

CONNER CONNECTION!  On Drew Barker’s second snap he found his old teammate Cameron Fogle for a first down.

Josh Clemons has evened the game up at 7.  His big 38-yard carry got the White inside the 10 before the powerful back punched it into the end zone.  Clemons looks like the Clemons of old, but Braylon Heard and Jojo Kemp are looking just as good, if not better.  Chad Scott might have a ‘good problem’ figuring out who his best running back is.

TOUCHDOWN JOSH CLEMONS! It’s great seeing him back on the field, although I’m terrified every time he goes down. Those legs are fragile.

Early enrollee Mikel Horton is just making this running back mess even trickier.  The guy has some grooming to do, but WOW he punishes people when they try to tackle him.  He’s been the catalyst for the White squad on this drive, not just running, but catching the ball too.

Poor Patty Towles.  The guy has the best passing stats thus far, but he has had back-to-back drives come to a halt on 3rd down sacks.  Don’t worry, they aren’t actually tackling the QBs, but Pat is beginning to get frustrated in the pocket.

Avery Williamson here wearing a “WHY NOT” t-shirt. He was just interviewed on the big screen and he said, “We have the best fans in the SEC, I’ll tell you that.” That got a pretty loud reception.

There is a guy on the UK sideline wearing a fedora.

Jojo Kemp high steps down the right sideline for a 48-yard touchdown run, his 2nd “homerun” play of the day.  Jordan Swindle gave him a sweet block on the end to give Mojo Jojo more than enough room to take it to the house.

HOLY Za’DARIUS!!!!!!!!!!!!  He had already knocked down one screen pass, but this one is SO MUCH BETTER.  He picked off Pat Towles’ screen pass.  They called him down on the 16 after Towles got his hands on him, but let’s be honest: Patrick Towles isn’t taking down Za’Darius Smith in a real game.  It only took one play before Reese Phillips found Steven Borden in the end zone for another Blue touchdown.

Patrick Towles had 53 seconds to take the Blue team 72 yards down the field.  He didn’t find the end zone, but Towles found Demarco Robinson four times and completed six passes before Austin MacGinnis hit a field goal to put the Blue up 24-7.  Towles was making all of the right throws, making difficult deep out throws look easy.  He managed the clock exceptionally well in the 2-minute drill, impressing fans and coaches alike.

The twins and Poythress just arrived. I’m sure they’re causing quite a scene wherever they are sitting; we hope to have a photo soon.

This is the best photo of the twins and Poythress I’ve seen so far. They are currently standing alone on the sideline during halftime.

Here’s a better one. Welcome back, guys. 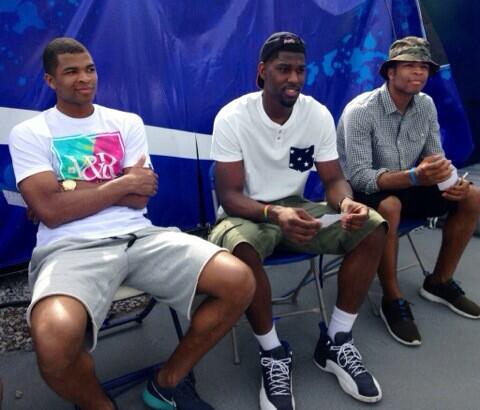 Landon Foster is booming the ball. Punter U!!!!

We’re gonna shut ‘er down here at the end of the third quarter as the reserves take over for the fourth. Nick will be by shortly with his takeaways from the afternoon while I sit in on the postgame press conference for notes and quotes from the coaches and players.

It was a great day here at Commonwealth Stadium with gorgeous weather and a solid turnout from BBN. We saw lots of progress from where this team was a year ago and Patrick Towles showed us he isn’t giving up that No. 1 spot easily. It’s going to be a competitive summer for the Cayts.