—  Keeping terminology consistent under Matt House. The new defensive coordinator has a similar scheme to what the Wildcats played a year ago, but it’s not exactly the same.  House is trying to adapt his system to the calls D.J. Eliot used.

“At the end of  the day you try to keep it as close in terminology as you can, because here’s what you don’t want to do,” House said.  “We got a lot of kids who are first year players.  You don’t want ’em to come back and learn a new language.”

—  Good news from the D-Line.  The weakest link on the 2016 defense, Derrick LeBlanc’s unit is currently rolling through nine players, three strings deep, to see who can fight for the right to be first on the field.

It’s encouraging to hear early praise from redshirt freshman Kordell Looney and sophomore T.J. Carter.  The biggest difference between this year and last year is who is in charge.  LeBlanc’s style is much different.  In individuals with Jimmy Brumbaugh, there was usually a lot of standing around while Brumbaugh went from person-to-person to provide instruction.  There’s no standing around with LeBlanc, and much less yelling.  That is saved for position group meetings.

—  A “rusty” Darius West.  The safety is moving around well after suffering a 2016 preseason leg injury, but Matt House said he’s still getting his feel back on the football field.  “(He’s) Maybe not as fast-thinking as you want.  Maybe not as quick to anticipate.”

To make up for lost time, West has spent an extensive amount of time in the film room with Coach Clinkscale to iron out the mistakes.

—  Watch action from the indoor facility.

—  Emerging outside linebackers.  Denzil Ware and Josh Allen have locked down their starting spots.  The concern entering this season is who is behind them.  Last year their depth was extremely thin.  Now Dean Hood is seeing growth from JUCO transfer Jordan Bonner.  Jaylin Bannerman has been a treat, but an illness kept him out of a few practices, forcing Jamar “Boogie” Watson to take all of the Jack linebacker reps.  Watson has been splitting time on both sides, but Hood said the workload while Bannerman was out has been beneficial to Boogie.

—  Courtney Love’s Pup is a Beast.  Technically, he’s a King; that’s the name of his pit/boxer mix.  I’m not sure how we got on this topic, but it’s probably the best interview I’ve had in four years of covering Kentucky football.

He brought King from Nebraska, and he’s become best friends with Greg Hart’s pup.  Naturally we had to show pictures of each other’s dogs.  I’ll always believe my pups are better, especially considering King is a Steelers fan. 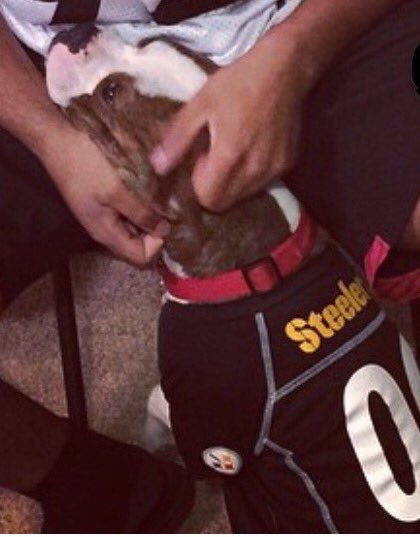 Hear everything Matt House’s gravely voice had to say after the jump.