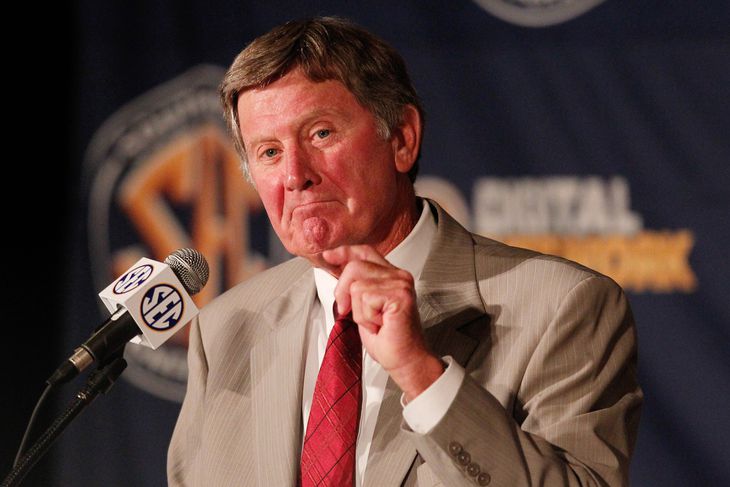 Total disclosure, from my previous life as a student athlete, I have first-hand experience of Steve Spurrier’s initial SEC impact. From 1990 to 1991, the league was forced to evolve in order to keep pace with the Head Ball Coach’s offensive innovations. My level of respect for the legend is incredibly high. Several credible analysts believe that today could possibly be his last Media Days appearance. Here are my Spurrier coach speak interpretations:

— Talked about winning at the Swamp and beating Miami in the Independence Bowl.

Interpretation-Spurrier always brags on his previous team’s accomplishments. Was strange to see him celebratory while talking about an Independence Bowl win over Miami. But by mentioning wins over both the Gators and Canes, he was directly addressing Florida recruits.

Interpretation-This is Spurrier’s last stand. If it doesn’t get fixed in 2015, this very well could be the end. He’s accomplished way too much to struggle in re-building his re-building project.

— Critics are out there, why their called critics, they criticize when they get a chance.

Interpretation-Spurrier being Spurrier.  In fact, there are many doubters of his 2015 team. In reality very few criticize Spurrier the coach. However, several are questioning South Carolina as a football program. Sustaining a top 10 level team is nearly impossible anywhere. This especially applies to non-traditional powers.

— Pharoh Cooper plays several different positions and is an All American type player.

Interpretation-His facial expression and tone of voice indicated that he highly respects Cooper. He seemed the most sincere when discussing this player. This tells me Cooper was a project and successfully developed under Spurrier’s tutelage.

Questions and Answers (both paraphrased)

Spurrier-Never has been resolved. Keep competing in pre-season practice. Can’t get four ready to play, maybe some plays for (true freshman) Nunez.  I’ve been a coach to play two quarterbacks.  Nothing in rule book says you have to have one. Don’t have a starter.

Interpretation-He legitimately doesn’t have a starter and there may not be a SEC level QB on his roster. I didn’t feel he was stonewalling. If history has taught us anything, quarterback is a straightforward Spurrier topic. His inability to recruit a top level QB is baffling. He is sincerely concerned.

Q-How close did you come to walking away (retiring)?

Spurrier- Lost 4/5, those were some tough losses. I felt like getting away for a minute. Some losses are tougher than others. Rejuvenated at bowl game. Getting Jon Hoke will really be helpful. Hoke has given extra life at South Carolina.

Interpretation-This question was asked three different ways. He mentioned that returning to work following disappointing losses challenged him. Also another Jon Hoke mention. This new hire is going to significantly impact Spurrier’s near future and legacy.

Spurrier-Carolina has had excellent runners, scheme, and offensive line. We need to stay on the field. Offense stays on the field helps you win the game. Offense got to stay out there and consume some clock. Keep other offense on sideline good way to win.

Interpretation-Strange to hear the Fun and Gun founder discuss clock management. Total 180 from his Florida days when the head Gator took pride in his quick strike offense. This is also a precursor to how he plans to play in 2015. Physical run game, play action passing, and hope that Hoke can mend defensive ailments.

Q-How have you kept your sanity and health this long?

Spurrier- Same way you sports writers do it. I forgot to lose and not going to cheat.  Ways you get fired. I do get away a lot more than most coaches. I work out more during the season than most coaches. Big thing is we’re winning and its fun. Still haven’t won an SEC. Nobody gives us a chance this year. We need to return to the top 10.

Interpretation-He’s always taken pride in working less than his peers. By saying nobody’s giving South Carolina a chance, I think he enjoys his new role as an underdog. I’m not so sure he has the alpha dogs to do anything about it however.

Spurrier-Mentally same as was. Two folks running for President, Hillary Clinton and Donald Trump are both 69. Coach K is 69. I still remember a lot. You don’t know what’s going to happen down the road. Got some goals we haven’t hit yet. We go to the beach stay four or five day and ready to get on out of here.

Interpretation-Was talking directly to recruits. A lame duck coach is an infective recruiter.  Also mentioned SEC coaches that could potentially be lured away by the NFL. He wanted to keep the door open to staying another four years if Jon Hoke can fix the Carolina defense and a credible quarterback surfaces.

Q-How have you evolved as a coach?

Spurrier-I think we run the ball a lot more than used to. More conservative.

Interpretation-This is the first time Spurrier appeared reflective. The former SEC passing game boy wonder has transformed into the old guard that he held in disdain years back. The Head Ball Coach has come full circle.

Steve Spurrier didn’t take shots at usual suspects Clemson, Tennessee, and Florida. I felt he was subdued, strangely humble, and pointedly disappointed in last year’s defensive performance. He repeatedly talked about new co-defensive coordinator Jon Hoke. Hoke’s hire signifies his last shot at potentially winning a SEC championship. I did like his take on proclaiming that he was the youngest SEC coach to win four consecutive bowl games. He’s also the only current SEC coach to win four consecutive bowl games. If this was his last appearance, I find that incredibly sad.