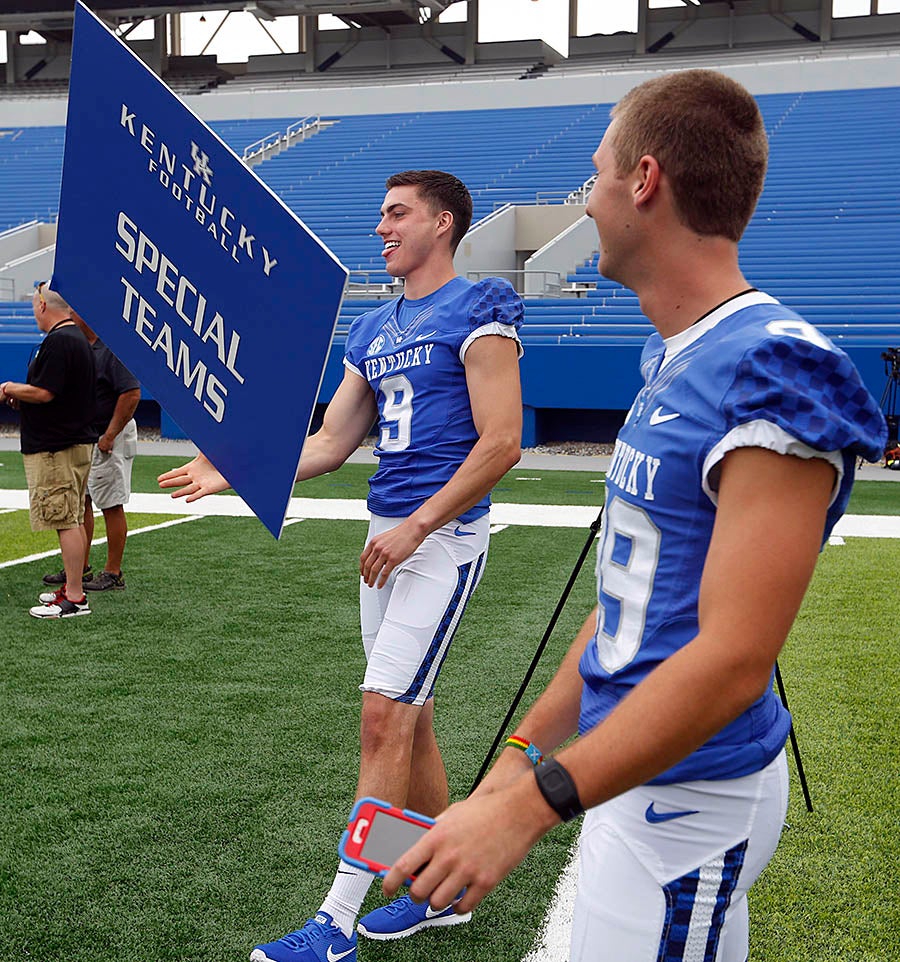 Trivia question: During his Kentucky tenure, who served as Jerry Claiborne’s offensive and defensive coordinators?

Coach Claiborne did not have coordinators. QB coach Jerry Eisman called the offensive plays (ones that weren’t overridden by JC) and LB coach Terry Strock led the Wide Tackle 6 defense. Neither had the official “coordinator” title. Much is being written and discussed about Mark Stoops’ decision to not name a special teams coordinator. Fact is, I’d never heard of a special teams coach until the Dallas Cowboys hired Joe Avezanno in 1990. He was prominently shown on television during both positive and negative ST plays. I can remember watching Cowboy games in amazement. I wondered why a football team would need a single coach to manage special teams. NFL teams have specific ST coordinators with that role as his sole responsibility. College special team coordinators are position coaches with an additional duty.

Division 1 college football teams are allowed 9 on-the-field coaches. Off the field “coaches” or additional non-coaching staff members are the latest fad. In some instances, such as in Tuscaloosa, the numbers filling these positions seem limitless. There are exactly zero college head coaches that would hire a full-time, on-the-field coach whose only responsibility is to coach the kickers/punters/snappers/returners.

Defensive coordinator DJ Eliot also coaches the inside linebackers. In addition to calling plays, offensive coordinator Shannon Dawson leads the quarterbacks. Did you know that Kentucky also has a running game coordinator? RB Coach Chad Scott is listed at that position. I highly doubt that Chad is charged with managing the entire running game or that Shannon Dawson stops his play calling responsibilities in mid-game to ask Scott which run play to call. Recruiting Coordinator Vince Marrow’s role has been vital in Stoops first three classes. However, I’d argue that it’s more important for Vince to be on the road instead of conducting traditional RC duties such as scheduling visits, mailing letters, and color coordinating coach’s geographical area maps. Truth is, a portion of non-offense/defensive coordinator positions are simply created to build resumes and boost assistant’s salaries. I can’t help but to think a special teams coordinator doesn’t partially fit into this category.

Special teams are normally the head coach’s most beloved and scrutinized group. Some take it as far as delegate the unit’s responsibility to themselves. Ever heard of Beamer Ball made famous by Frank Beamer and Virginia Tech? Urban Meyer’s reputation was built on his revolutionary spread offense. While at Florida, Meyer was the sole coach of the Gator punt team. Reality is, specific special team units have always been led by position coaches. The decision of which players participate in special teams is the head coach’s call.

On a typical coaching staff, a defensive back or receiver coach directs the return teams. At times, the linebacker or defensive line coaches the punt and or kick-off teams. Field goal and PAT units are led by a tight end or offensive line coach. Kickoff and KO return is a collective effort from several coaches. What Stoops is doing is not revolutionary. What Stoops is doing is retro and it makes historical sense. The head coach makes the final decision to punt, go for two, fake punt, or attempt a kick block. The special team coordinator is traditionally the unit’s personnel director and oversees day to day operations. A collective effort can be just as effective. An argument could be made that by not having a ST coordinator eliminates the middle man and streamlines efficiency.

In summary, I’m not the least bit concerned that UK doesn’t have a special team’s coordinator. To be honest, I never quite understood why that position was ever created and often doubted its practicality.

Below is a continuation of our football dictionary and my random Top Power 5 Conference rankings:

Wheel route: Refers to an offensive pass play when an inside receiver initiates horizontal direction toward the sideline, then turns vertical toward the end zone. Normally, the outside receiver runs a route toward the middle of the field to draw the safety away from the sideline. Think of this as a misdirection pass route.

Hard count: This term describes the quarterback’s cadence when he tries to draw the defense offsides by an increase in voice inflection before the football is snapped. A veteran QB also gives an influential head bob to sell the deal.

Off the hash: In a perfect world, the strong safety and free safety line up directly on the hash mark lines on the field. These are the short, horizontal lines painted near the middle of the field. “Off the hash” describes the safeties breaking from their initial position to make a play on a receiver towards the sideline.

Dime Back: Remember from last time, the Nickel is the 5th defensive back. The Dime back is the 6th. This defensive scheme is usually called versus in definite passing situations with significant yards to be gained for a first down.

Edge: The term, “coming off the edge” is commonly used in describing defensive ends or outside linebackers as they are lined up beyond the widest offensive player on the line of scrimmage.

Until next time, BBN. And don’t fret over the special team coordinator stuff. Dynamic returners and better athletes covering kicks will make the team much improved in the third phase.

21 Comments for No Special Teams Coordinator, No Worry