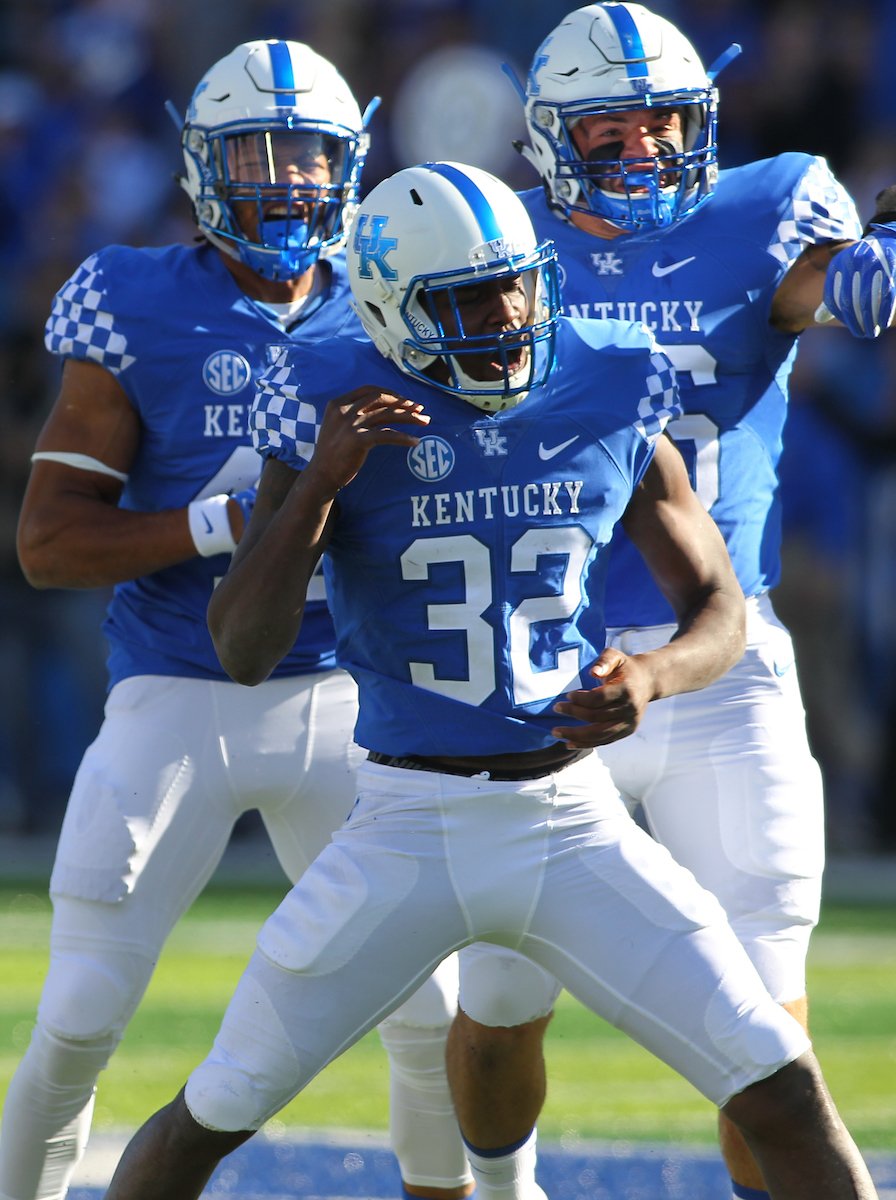 Kentucky will be without All-SEC linebacker Jordan Jones against South Carolina.  The Will linebacker charged to slow down the Gamecocks’ offense is Eli Brown.  There are a few things you need to know about the next man up.

He was the highest-ranked member of the 2015 recruiting, ahead of Jones, C.J. Conrad, Chris Westry and Derrick Baity, to name a few.  A four-star prospect from Warren East High School in Bowling Green, Brown earned the right to play in the U.S. Army All-American Game.

Getting Brown to Kentucky was not an easy task for Neal Brown.  He grew up cheering for Florida.  Another successful Western Kentucky product tried to recruit him to Gainesville: Joker Phillips.  Not far from Nashville, James Franklin convinced Brown to commit to Vanderbilt.  When Franklin left for Penn State, Brown re-opened his recruitment.  It didn’t take long for Neal Brown to persuade the Bowling Green Brown to stay home and represent his state in college.

Brown’s Kentucky career did not begin right away.  Recovering from a high school leg injury, he used his first year in Lexington to complete rehab.  The ultimate goal: gain weight, something that was much easier said than done.

Jones won the offseason competition to start at Will linebacker entering the 2016 season.  Brown’s classmate dominated opponents, until he was injured at Neyland Stadium in the first half of the Tennessee game.  Jones’ injury could not have come at a worse time.

Facing misdirection from Josh Dobbs in the read option was a difficult task that put a lot of stress on the inside linebackers.  That was compounded with personal stress.  Mark Stoops revealed two days after the game that a personal, family issue forced Eli to miss a significant amount of practice time leading into the Tennessee game.  Brown still had four tackles, but the lack of practice reps against the Volunteers’ scheme showed.

Shining in the Spotlight

The game in Knoxville wasn’t the first time Brown saw significant action, it was where he was forced to play the most snaps.  He earned the right to receive snaps in Tuscaloosa.  Brown was excellent against Alabama.  Finishing with seven tackles, it was the best game of his young career.

For the first time in his Kentucky career, Brown entered the 2017 season with the weight needed to consistently play in the SEC.  He was able to solve the persistent problem by changing his work ethic, something he’s not afraid to admit was a big problem in the past.

“I changed a lot.  I came in last year lazy.  Now, every practice I’m going full speed.  If I’m not sweating a lot, I feel like I haven’t done anything in practice.”  Brown added, “I’m trying to go hard every play because you gotta practice hard for the games to be easy.”

When he hasn’t been playing defense regularly, he’s always played an important role on special teams.  It’s been mostly positive, until he made a costly mistake against EKU.  In a safe punt, he leaped over the shield.  The 15-yard penalty resulted in a first down that extended a drive that ended with a touchdown.

The Ying to Jones’ Yang

When you watch Jordan Jones play linebacker, you see a loose cannon who covers the field sideline to sideline.  Brown’s style is a little different.

“I have more of the physical game inside,” Eli said this week.  “I think that helps both of us. It’s different schemes when we get in. When you scout us, you’ve got Jordan full speed and you’ve got Eli who’s gonna get downhill.”

Even though it’s where Jones excels, Brown must be able to play sideline to sideline against South Carolina.  The Gamecocks are at their best using two tight ends to stretch the defense horizontally and expose the middle of the field.  Brown will be stressed in this important road test.

If Brown gets banged up, Kentucky will be forced to pull a redshirt.  The next man up on the depth chart is freshman Jamin Davis.  A talented early enrollee from Georgia, he proved in the spring game that he could play right away by leading all defenders with eight tackles.  A member of the travel squad, they hoped to save him from playing this season, but that will not likely be the case following Jones’ injury.