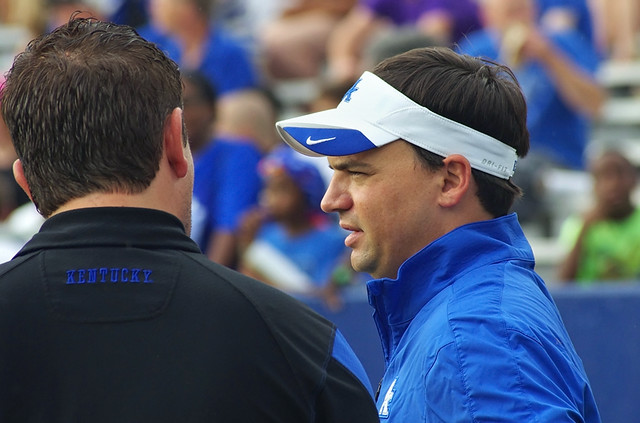 Neal Brown was a guest on Kentucky Sports Radio radio in his hometown of Danville this morning to catch us up to speed on the last free Monday before fall camp. Of course, the quarterback situation is the question weighing on fans’ minds, and though he couldn’t hint at a starter, he did say redshirting Drew Barker will be an option IF he isn’t in contention for that starting spot. (That’s a big IF, folks.) Brown did not say whether or not Barker is showing signs of a guy who can compete, but he answered Matt’s hypothetical of will they consider a redshirt IF Barker isn’t QB1. Yes, it’s an option.

Brown also told KSR to expect to see more of what his offenses did at Texas Tech and Troy. After an abysmal first season, Brown believes his team will be much improved on his side of the ball. He said last year’s receiving corps was the worst he’s ever had to work with in football as they began the year without a single player who had caught a touchdown pass at UK. Javess Blue and Ryan Timmons will lead that group, Brown believes.

When UK isn’t firing the pigskin in the Air Raid, the running game has the potential to shine. Brown called his running backs the deepest and strongest position on the team, and the backfield will have a better offensive line to run behind. The line lost one guy from last year, Kevin Mitchell, and the returners are bigger and stronger across the board. He’s also excited to add his redshirt freshmen to the mix.

We’ll have the entire interview on the site a little later today.