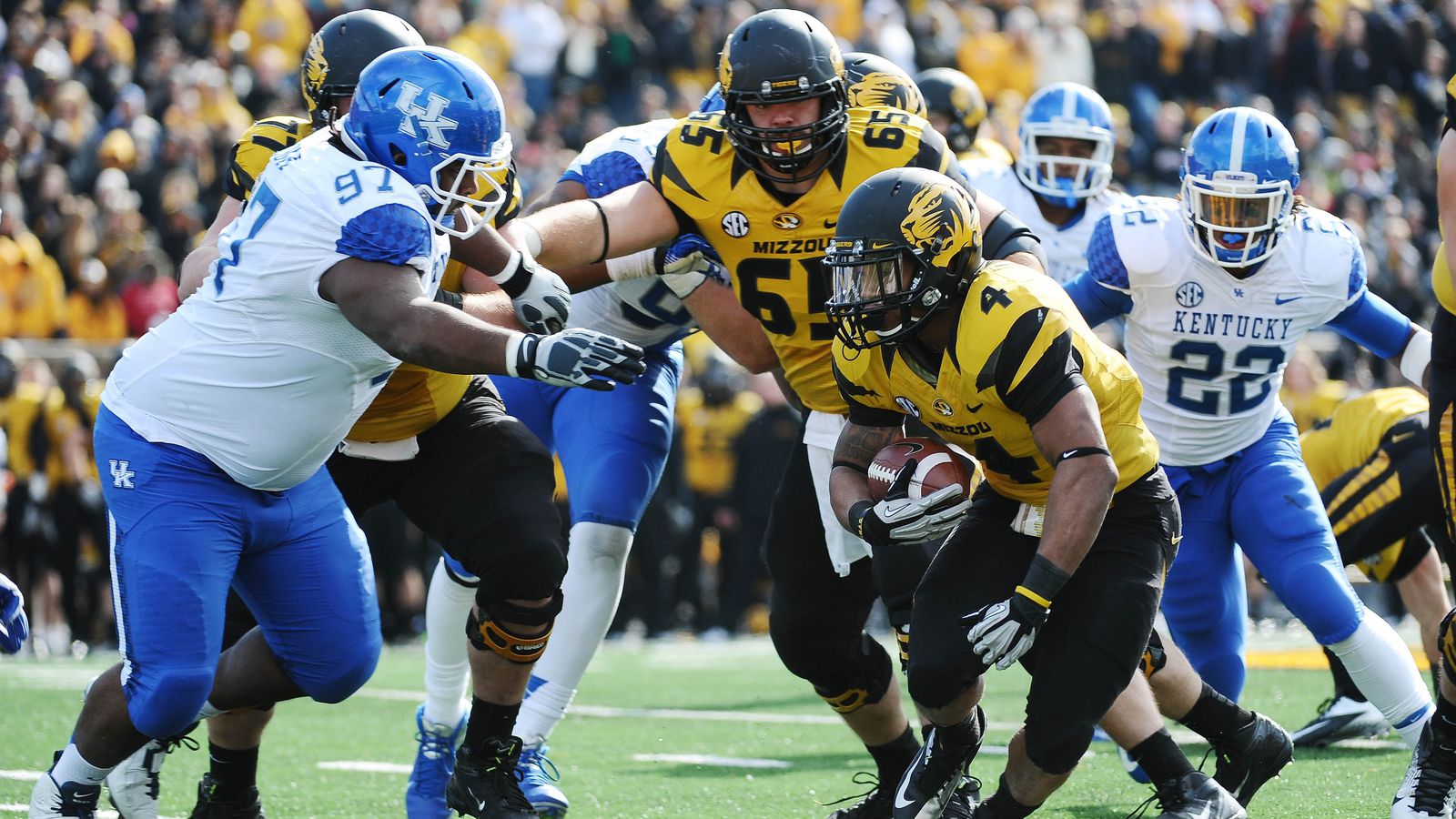 “Mizzou Made” is Gary Pinkel’s description of the Missouri Tiger football program. One of the slogan’s key components is player development. In recent history, few have done it better than the Missouri head coach. Pinkel’s teams have won five of the last eight divisional championships, a stretch than spans both the Big 12 and SEC. How the Tigers have done so has varied, but two constants have stood the test of time: Win the fourth quarter and a fundamentally strong, disruptive, and opportunistic defense.

Missouri comes to Commonwealth Stadium undefeated, ranked, and with a remarkable 11-game road win streak. Below is a preview of Saturday’s critical SEC matchup as well as a position group advantages and analysis for both teams:

Kentucky’s currently ranked 11th in total and scoring offense. Missouri is 13th in scoring offense and last in both total and rushing productivity. UK averages 25 points per game, compared Mizzou’s 23.3.

In 2015, Mauk enters the Kentucky game completing 42-of-80 passes for 474 yards with five touchdowns and four interceptions. His ability to extend plays and drives through pocket improvisation presents a familiar challenge to DJ Eliot’s defense. True freshman Drew Lock has also taken snaps. The rookie has impressed by completing 60% of his passes.

Kentucky’s Patrick Towles has been inconsistent. With completion percentages of 47, 72, and 33%, the Wildcat offense has yet to chain together two complete halves of football. Following the Florida debacle, UK’s junior quarterback’s Saturday performance has career implications. All eyes will be on Patrick Towles on Saturday. A bounce back, accurate, and composed game is obligatory.

Boom Williams has established himself as a top-five SEC running back. In fact, Williams is currently the league’s fifth leading rusher averaging 107 yards per game. His 107 yards per game is exactly the number Missouri averages as a team. Mikel Horton and JoJo Kemp have also exemplified rushing success.

Missouri’s total rushing yards per game is good for last in the SEC. However, its 2014 thousand-yard rusher, Russell Hansbrough, has missed time due to injury. He is expected to return against Kentucky. His presence will automatically boost Mizzou’s inept running game.

As I type this segment, I can feel the collective Huh? reader comments. No secret that Coach John Schlarman’s unit struggled against Florida. But, in reality, Kentucky is four spots ahead of Missouri in total offense. Much like its quarterback, the big guys up front will be called upon to execute at a higher level. Problem is, Missouri’s defense is ranked at the top of the league in total defense.

Missouri’s offensive line is led by center Evan Boehm. The All-SEC and All-American player has 43 consecutive starts and is the anchor of the Tiger offensive line. The Tigers had to replace key starters from last year’s SEC East championship team.

This article is becoming a copy-and-paste post. See above. Wildcat receivers have shown flashes of dominance. But against Florida, those flashes were overshadowed by drops and missed opportunities. However, collectively, UK’s receiving corps is deeper and more talented.

Missouri’s leading receiver is J’Mon Moore. Moore has 11 catches for 130 yards but only one touchdown. Youth is common for Tiger pass-catchers and has led to inconsistency and dropped passes.

Sean Culkin is Maty Mauk’s security blanket. The veteran tight end has 11 catches on the season for 97 yards. Culkin is a drive extending receiver that is also strong at point of attack blocking.

Kentucky’s tight ends have gone zero for September in catches. A number that perplexes the BBN. At some point, highly vaunted freshmen CJ Conrad and Darryl Long will have to be targeted.

The Tigers are the nation’s seventh ranked defense and fourth in tackles for loss. In addition, Missouri is ranked number one in the following SEC defensive categories: Total, pass, scoring, and pass efficiency. The Tigers will play a 4-3 scheme that varies dependent upon down-distance and field placement. Its strength is, well, all over the field. There are no glaring weakness. Extremely well coached defense.

Missouri is Defensive Line U. The Tigers have recently selectively recruited, developed and produced NFL defensive linemen. However, it lost four potential starters from the 2014 unit that had 44 sacks on a defense that only blitzed 18% of the time. Shane Ray and Marcus Golden are now Sunday players. Rising star Harold Brantley was lost to the season from injuries sustained in a car wreck and DE Marcus Loud was dismissed from the team. This year’s unit is led by the SEC’s leader in tackles for loss, DE Charles Harris. Joining him at DE is Marcell Frazier. Both are disruptive and excellent edge pass rushers. In the middle, John Augustus and Rick Hatley are joined by the nation’s 2015 top ranted DT recruit, Terry Beckner. As a group, depth will be evident by a constant rotation of fresh defenders rotating in and out of the lineup.

Last week, UK’s Regie Meant was playing his best game as a Wildcat prior to leaving the game due to a shoulder injury. Replaced by C.J. Johnson, the senior then proceeded to pick up where Meant left off. Six tackles, a sack, and blocked kick provided energy. Nose tackles Melvin Lewis and Matt Elam tackle production has declined. However, Farrington Huguennin, playing as a fifth year defensive end, is expected to play. Seven tackles against the Gators was his second consecutive positive performance.

Weak-side linebacker Kentrell Brothers is the SEC and nation’s leading tackler. He’s also intercepted two passes and blocked kicks. He and middle linebacker Michael Sherer combine to make one of the league’s most formidable linebacker duos. They are joined by Donavin Newsom.

Ryan Flannigan is expected to play in his first game of the 2015 season. Khalid Henderson filled in during his absence and has played three rock-solid football games. With Flannigan’s return, Josh Forrest will now have a capable backup to give the productive senior a breather. Jason Hatcher’s return from suspension provided necessary pass rush. Statistically, Henderson-Forrest have more tackles than Brothers-Sherer. Even with the nation’s leading tackler in Kentrell Brothers, this comparison was closer than you’d imagine.

Cornerback Aarion Penton is the Tiger’s third leading tackler. Joining him at corner is Kenya Dennis. The pair is considered an SEC top-three combination. Safeties Anthony Sherrils and Ian Simon are active and aggressive against the run. All four are sure, open field tacklers.

Can’t say it enough, veterans Cody Quinn and J.D. Harmon have impressed after being pushed in fall camp by a plethora of talented freshmen. Chris Westry is the position’s future star. Safeties Marcus McWilson and AJ Stamps have been consistent. McWilson and Stamps are catalysts for UK’s secondary improvement. Kentucky will have interception opportunities on Saturday.

Mizzou has blocked kicks. A factor that has to be taken into consideration on Saturday. Tiger kicker Andrew Baggett has been consistent with an 80% FG percentage and 100% success rate on PATs. Both UK and Missouri are averaging right at eight yards per punt return.

Missouri’s defense is elite. In comparison to Florida, the Tigers are fundamentally stronger but won’t match the Gator’s collection of elite, future NFL talent. Statistically, Mizzou is better. Before the “well who have they played” questions surface, the same could have been said about Florida. Missouri’s defense will be the best coached and most fundamentally sound unit that the Wildcats will face in 2015.

Missouri’s offense hasn’t impressed. Coming off an ugly 9-6 home win over UCONN, expect Mizzou’s offense to look much different with the potential return of RB Russell Hansbrough. QB Maty Mauk is a stone-cold winner. 17-4 as a starter and his SEC best fourth quarter quarterback rating support that claim. Offensively, the Tigers will lull you to sleep. Their intent is to take the game into the fourth quarter and rely on defense to win. As a team, Missouri is comparable to boxer Floyd Mayweather.  They keep jabbing and striking points on the scorecard, but rarely win from a knock-out punch.

Kentucky’s offense hasn’t scored an offensive touchdown in six quarters. Missouri is not the opponent in which to “get right.” The Wildcats will have their hands full on Saturday night. But, a potential 3-1 September record would exceed expectation. College football experts are expecting a baseball game type final score. If the game is close going into the fourth quarter, advantage Missouri. IF Kentucky scores early points and plays four quarters of efficient football, advantage goes the home team. Regardless of expectation, the truth of the matter is, UK has a legitimate chance to win a SEC home game against a ranked opponent. In fact, it’s favored to do so.

27 Comments for “Mizzou Made” for the 4th Quarter: UK-Missouri Preview