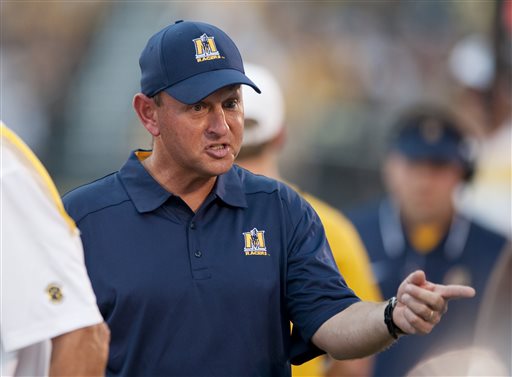 Throughout the day, KSR is profiling who we’re hearing are the top candidate for UK’s offensive coordinator position. First, we profiled ECU’s Lincoln Riley. Next up, Murray State head coach Chris Hatcher… Hatcher played under Hal Mumme and offensive coordinator Mike Leach at Valdosta State and coached with both at Kentucky during Mumme’s tenure. At UK, he coached quarterbacks and wide receivers, including Tim Couch, and also coached alongside Sonny Dykes. After Mumme resigned, Hatcher took the Air Raid to Valdosta State and rebranded it the “Hatch Attack.” The Hatch Attack is very similar to the Air Raid, with the same route concepts, blocking schemes, and plays, but the tempo is even faster.

Hatcher was on Kentucky’s sidelines during the UK/UofL game Saturday at Papa John’s Cardinal Stadium. It’s safe to assume that Mark Stoops knew Neal Brown was taking the Troy job by that point, so you have to think that means Hatcher is already under consideration.