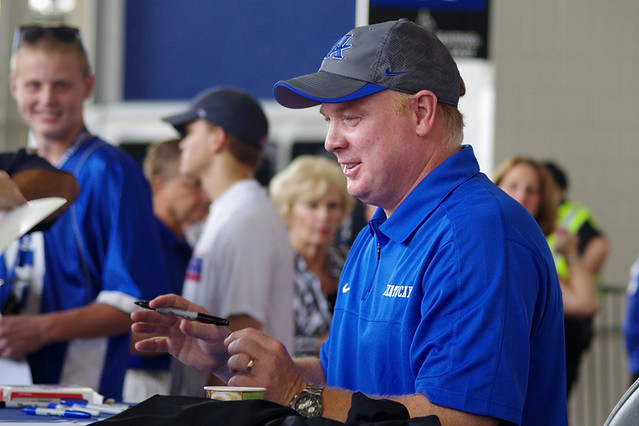 Mark Stoops discussed a number of topics at today’s football luncheon in Louisville (although nothing was all that newsworthy) and increased fan support for the program is one of the things he addressed. Stoops, who often gives praise to Big Blue Nation, said it has been “fantastic”:

Yeah, I was so pleasantly surprised with that passionate fan base. I knew we had good fans, just by the numbers, if you look at the history of attendance. But to feel that energy and feel that passion since we’ve been here, it’s been fantastic. And you all know that. I think local media get a good feel for that. Sometimes national media doesn’t get the fact that we have great fan support and how passionate the Big Blue Nation is. Basketball, I get asked that question all the time, but they deserve that. We embrace that. They deserve the attention they’ve gotten. They’ve been good for a long, long time. How many years? A hundred years? I don’t know. A long time. But anyway, we feel very good about the support. That’s evident by the attendance, by the support of people and by the way people are making donations to improve our facilities.

Stoops also said he embraces the occasional basketball question, but one would assume it must get annoying at times. One of the first questions at SEC Media Day last week was about UK being a basketball school, to which he also said, “We embrace it.”

Soon we’ll all be in Commonwealth Stadium, embracing Stoops and his Wildcats on the field.