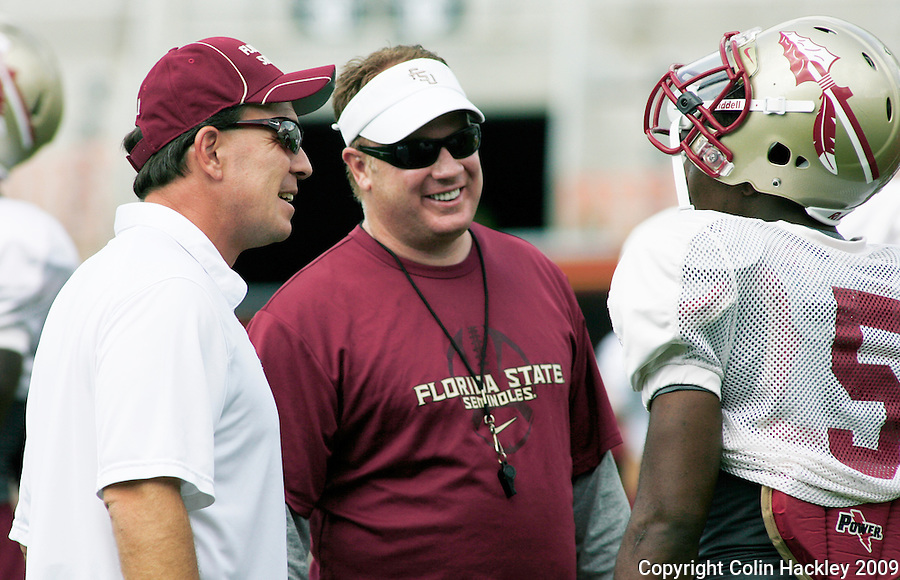 When Kentucky travels to College Station for the first time since Bear Bryant roamed the sidelines in 1952, Mark Stoops will see a familiar face on the other side of the field.

After eight seasons and a National Championship, Jimbo Fisher left Florida State to become the head coach at Texas A&M.  For three of those years, the offensive-minded head coach tasked Stoops to lead his defense.

Kentucky’s head coach learned a lot in those three years with Fisher.  Before he took the SEC Media Days stage, commissioner Greg Sankey asked Stoops if he learned the secret to beating Jimbo.

“I know all of his secrets, but it doesn’t make it any easier,” Stoops laughed.

Some of those secrets, probably better described as lessons, Stoops incorporated into UK’s program when he took over in 2013.

“There’s many things I do at Kentucky that I took from him,” Stoops said. “Certainly you have to be your own man and do things that fits your own program, but there’s things I’ve taken from him I still implement to this day.”

Stoops and Fisher remain close friends and never hesitate to reach out to one another for advice.

“I do rely on Jimbo for some advice from time-to-time still.  We keep in contact. I definitely consider him a friend,” he added. “We’ll always be there to support each other.”

The most notable time Stoops leaned on Fisher for advice happened at the end of the 2016 regular season.  Kentucky was preparing for a bowl game, something Stoops had never done before as a head coach.  He reached out to Fisher to see how Florida State crafted a bowl practice schedule.  Fisher never hesitated, and is proud of what Stoops accomplished at Kentucky.

“You know this, when you play against Mark…those teams are going to be extremely well prepared,” Fisher said. “Mark has done a great job in Kentucky getting to the Bowl game and playing. I think we did an unbelievable job at Florida State.

“I have great respect for Mark. He’s not only a fellow coach, but a friend. He’s a great guy and a better person than he is a coach. He’s one heck of a football coach. I have a lot of respect for him.”

They share plenty of respect for one another, but when they coached together, it wasn’t always roses.  Sure, they made some great memories, but there were also a ton of back-and-forth battles on the practice field.

“I am a defensive coach. He’s an offensive coach,” Stoops said.  “You talk about the fun we’ve had competing against each other, it’s kind of what it’s all about. He’s a very hard-nosed, tough football coach. And I am as well, but those were fond memories. Not always day-to-day, they weren’t always a lot of fun.”

The battle between Stoops and Fisher will resume on October 6.  We’ll find out then if knowing Jimbo’s secrets are enough to upset the Aggies.