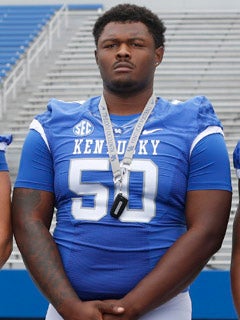 After sharing the good news that Patrick Towles has been named the starting quarterback, Mark Stoops had to temper it with some bad news. Stoops says he had to dismiss Ohio State transfer Marcelys Jones for a violation of team rules. The 6’5″ 315 lbs. offensive guard transferred to UK in June, but, unfortunately, it was all for naught.

A LOT happened in that presser and Nick will recap it all for you, but here’s a quick injury report: