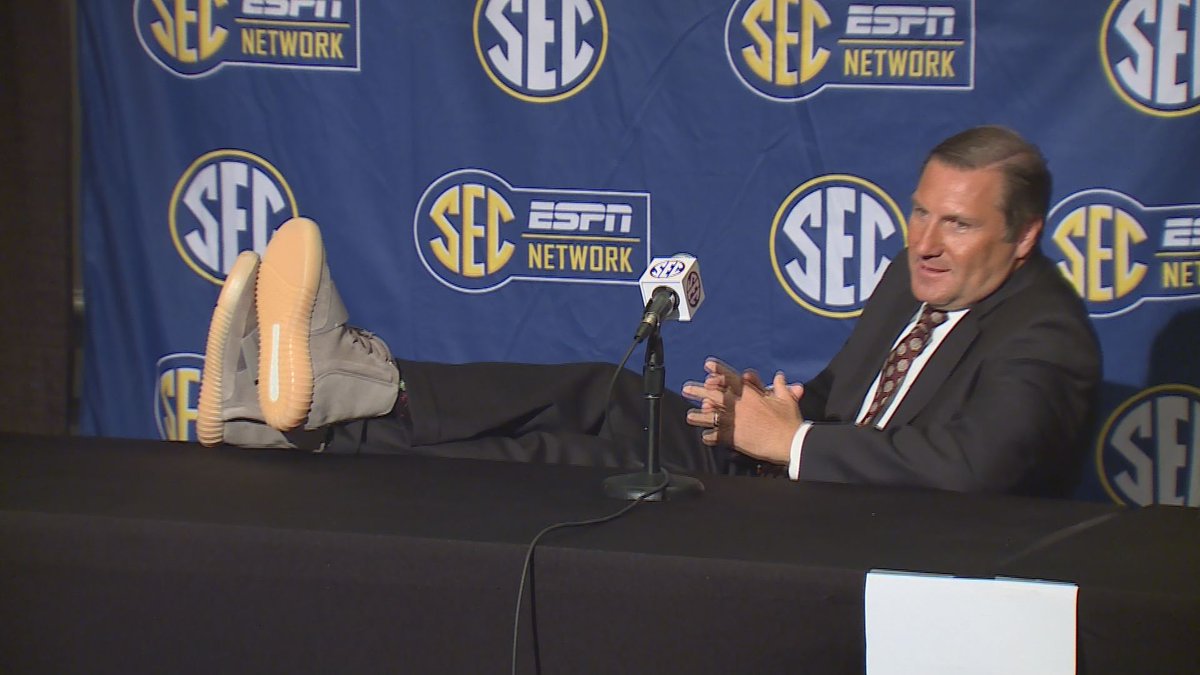 Mullen wanted the world to see his Yeezy Boost 750s, from @SMossWKYT.

Why Does Dan Mullen Think We Care About His Shoes?

To see what Dan Mullen has done in Starkville is nothing short of extraordinary.  He deserves to be commended for his work, but today he deserves to be put on blast (Kyle Tucker didn’t hold back).

Mullen arrived tan and prepared to talk about his fancy adidas shoes, but he didn’t come ready to speak about accepting Jeffrey Simmons, the five-star recruit shown hitting a woman on video, into the Bulldog program.

I see what Mullen’s trying to do.  He’s trying to sell Starkville.  It’s tough.  You’re in the middle of nowhere, you’re stuck wearing adidas and the staple of your school is a din created by cowbells.  He tried to create cool today instead of sticking to his typical straightforward approach.  Selling the shoes might work for recruits, but it didn’t work today.

I don’t think so, but I can’t be sure.  Of all the Saban products currently coaching the SEC — Muschamp, McElwain and Smart — nobody embodies the ideals of Saban more than Smart.  He has a similar robotic approach, except with more Southern draw.

The only thing separating the two is that Smart was actually a good defensive back in college.  Saban’s one-year at Kent State was uneventful, but Smart was good enough to pick off the best passer the SEC’s ever seen — Tim Couch.

Why Does No One Clap for the Coaches?

Before each coach steps to the podium, the Commissioner provides an introduction, met with an awkward silence.  When Kevin Sumlin took the stage, he started with a joke, “Thank you for the large round of applause.”

Sure, you’re supposed to be ethical and not show bias, but being silent doesn’t mean there aren’t homers in the crowd.  They say you’re not supposed to call a coach, “coach.”  I think calling a coach “coach” is polite, and an applause would do just the same.

How does Kevin Sumlin “take care” of Johnny Football?

The former Heisman Trophy winner personifies a modern day Shakespearean tragedy.  People knew the NFL wouldn’t be too kind, but I don’t think anyone predicted that he’d be a walking TMZ headline.

When Sumlin was asked if he’s still in touch with Johnny, he said they’ve exchanged a few texts.  “Once an Aggie, you’re always an Aggie,” Sumlin said.  “We take care of each other.”

This could be the football talking-head fatigue kicking in, but I can only perceive this as a drug reference.  The only thing missing was a nod and a wink.

They have pictures of the entire SEC Network crew plastered all over the place.  The whole gang is in town — Finebaum, Tessitore, Spears, Maria Taylor — but no where in sight can you find Tim Tebow.  This three ring circus has plenty of clowns.  The only thing missing from the chaos is Mr. Tebow.