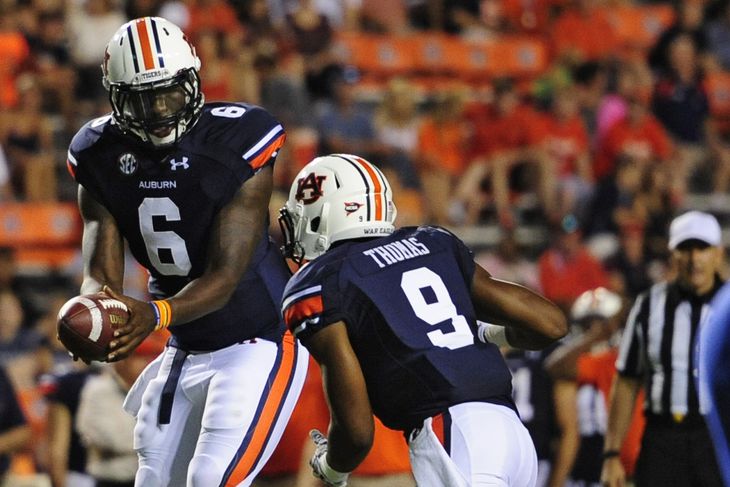 When Auburn is “right,” its basic offensive play combines three options into one: the run-pass option. This scheme requires a quick-thinking, athletic quarterback; disciplined running backs; and capable receivers. The simplest description is equated to the pick-and-roll in basketball. What happens after the pick leads to the result of the roller. Only in this case, the run-pass option involves three players: the quarterback, running back, and wide receiver.

The basis of the run-pass option comes from the establishment of a basic inside zone run play. EKU repeatedly ran a variation with success.

Quarterback handing the football off to a running back on an inside zone running play. The running back’s path is in the direction of the play-side hip of the center. By zone blocking, the running backs can choose to remain on the same path following the hand-off or cut back. His direction is based off defensive pursuit and subsequent errors.

The second phase of the play is a quarterback run. The decision point is quick and must be instinctive through repetition. If the defense is in the position to stop the running back or option one, the quarterback can then pull the football from the running back’s stomach and run to a specific lane. The QB’s path can be inside or out, but for simplicity, let’s say outside.

The third phase is a pass to a receiver. Pass route combinations are incorporated into the run-pass option. If the RB run is defended properly and the quarterback does not see an open run lane, the QB then reads the second level (linebackers) and third level (secondary) defenders to throw to a predestined receiver. Common routes are a slant where the receiver runs vertically for three steps then angles toward the middle of the field. Other pass routes can include a WR screen or a hitch route. A hitch route is when the receiver takes an initial step downfield, then turns back toward the quarterback. Versions of the bubble screen or vertical routes can also be incorporated. Obviously, more complicated versions happen on Saturdays, but intent of this post is to cover the basics.

Offensive line blocking assignments remain virtually the same for all three options. In college football, offensive linemen can move three yards beyond the line of scrimmage during a pass play. Anti-spread offense college football coaches have diligently fought for a rule change to emulate the NFL. In the League, the o-line can only be one yard downfield during a pass play.

WHY THIS OFFENSIVE CONCEPT IS CHALLENGING TO DEFEND

— Forces the defense to protect the entire field. In other words, this one play stresses the defense to play assignment football thus prohibiting athletic defenders to make tackles outside their normal areas of responsibility. In addition, attention to detail has to be maintained for sixty minutes. One slip in defensive responsibility can lead to an offensive explosion play.

— Places the football in the hands of the offense’s best athletes. Normally, these players are the quarterback, running back, and receiver.

— By using tempo to run the same play with three distinct intentions, offenses can run several consecutive plays. Auburn’s intent is to snap the football every 10-12 seconds. This tires defensive linemen and prevents defensive coordinators from making situational substitutions. Defenses built to stop the power run game (Alabama, LSU) have fits trying to defend this concept. Remember the saying from Remember the Titans: it’s like Novocain; give it time and it will work. Same concept applies here.

— UK struggled against EKU’s inside zone run play. Also, at critical junctures in the game, the Colonels’ quarterback ran for first downs to extend drives. Louisiana-Lafayette also had success utilizing this play.

HOW TO STOP IT

— First and foremost, consistently stop option one of this play which is the inside zone run. By consistently taking away one of the three possibilities, in essence the triple threat then becomes a double threat.

— Second and third level defenders (the linebackers and defensive backs) have to maintain assignment discipline. If you remember, I’ve mentioned the shiny fishing lure theory. Auburn is the Professional Bass Pro Champions. There will be motions, misdirections, funky formations, and every other concept to take defenders eyes off the prize. That prize is the football.

Hope this helps. Auburn’s one play call will have three options. Cam Newton and Nick Marshall ran this play to perfection for the Tigers. Through five games, this year’s quarterbacks have not. Expect a wild one on Thursday.