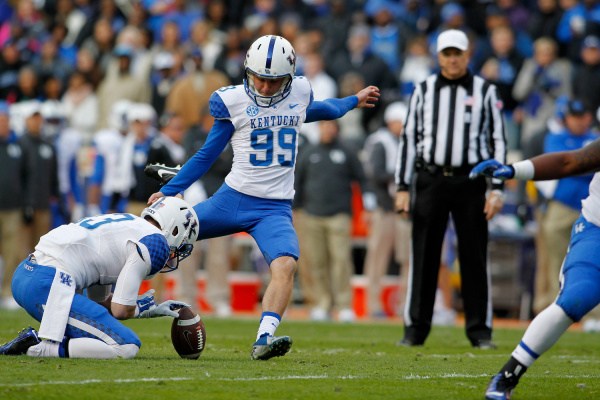 It has been a disappointing first half of the season for Landon Foster, who is having an uncharacteristically bad senior year. A former Freshman All-American and All-SEC punter, Foster hasn’t shown the leg he had in his first three seasons, at least not consistently. Couple his troubles with the problems UK is facing on kickoffs with a banged up Austin MacGinnis, and the kicking game is a real issue heading into Saturday’s contest at Mississippi State.

Today, Mark Stoops said, “I don’t know what the reason is, we just have not been effective enough in the kicking game with Austin being hurt. It really put us behind the eight ball with Miles having to do the kickoffs. Then with the punts, we have not kicked the ball well enough. You have heard me talk about that for several weeks now. In a close ball game, it hurts you.”

We know Foster can do it; it’s just a matter of doing it. And hopefully MacGinnis is back to full strength and pinning opposing teams back on kickoffs against the Dawgs.

“That is the plan,” Stoops said of MacGinnis’ return. “He is working towards being able to kick off this week.”

9 Comments for Kentucky’s kicking must improve