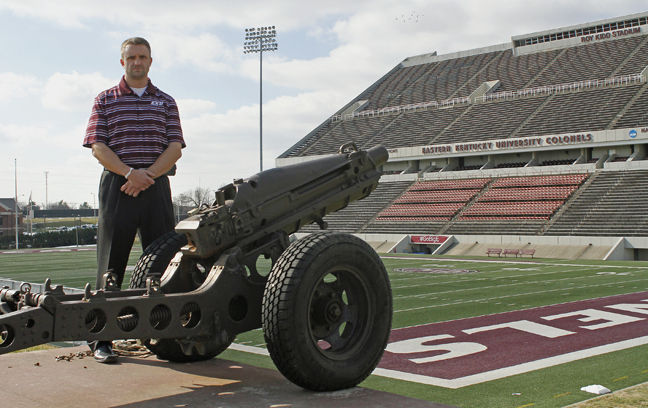 Eastern Kentucky head football coach Mark Elder has discovered that preparing for Kentucky is much more difficult than he initially anticipated.  He can hardly watch the Wildcats’ film.

“My eyes are bleeding from looking at it as a matter of fact,” Elder said on today’s OVC teleconference.

Some people use the idiom to describe disgust, but Elder was nothing but complimentary of the Cats, especially on the defensive side of the ball.

“I think that they’re a complete football team.  You look at all three phrases from their game from last week, you look at all the games from a year ago, the first thing that stands out to me is their defense; how good they are on defense and how improved they are from defense.

“They were good last year, but they’re legitimately a major, big-time defense.  They’re stout.  They’re very, very tough against the run.  Schematically they put you in a tough spot by putting more people in then box then what you’re capable of blocking.  Not only are they good up front, but they’re schematically difficult to run the football against.  They’ve got two outside linebackers that are big-time, big-time playmakers.

“I remember the guys that are starting for them from two years ago at Tennessee.  They were the same dudes, they we’re just younger.  Obviously they were making freshman mistakes two years ago, and now they’re veterans that are balling out.”

Elder did not stop at the defense.  He described Stephen Johnson as dynamic, shared concerns about UK’s big wide receivers and said the offensive line is “going to present some problems for ya.”  He ended by pumping up the Cats more than some fans.

Feel free to listen to more from Elder.