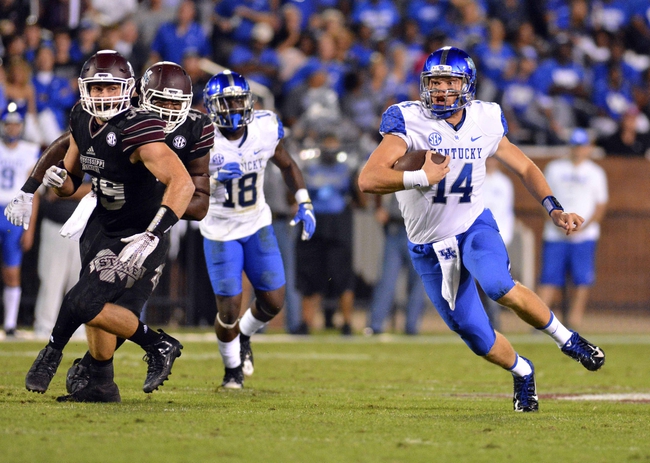 So here we are at the potential crossroads of Kentucky’s football season. IF the Cats can pull off the 7 point upset against UT then 8-4 is very much on the table alongside a .500 record in the SEC for the first time in decades. If the Cats get blown out like they did against Mississippi State then all eyes switch to basketball season until at least the Louisville game and possibly beyond.

As you’ll see, for just about the first time this season the Cats are playing the role of true underdog. In every other game this season at least one national writer has picked the Cats but for tomorrow’s game everyone is picking the Vols. That could be a blessing in disguise for UK. As we saw against Florida and Auburn the spotlight and pressure of a winnable game seemed to weigh on a young team and completely throw off the first half. Tomorrow the boys in blue will be playing with house money and have a chance to catch the Vols as the team with the pressure to win. To do that they’ll certainly be facing an uphill battle according to these predictions:

Christopher: Kentucky’s defense is what we thought they were. That’s what Dak Prescott revealed to all of us in Week 8, and to a lesser extent Sean White in Week 7. I fully expect Tennessee quarterback Joshua Dobbs to be good enough to exploit that unit as well. UK’s pass defense allows 7.4 yards per attempt. The Wildcats offense averages 19.8 points per game against SEC competition this year. The narrative that Kentucky has turned around its program may be true in the intermediate term, but in the short term, this team has more personnel issues than some are acknowledging. For now, UT is the better team.

Tennessee doesn’t lose to Kentucky often. In fact, they lost to the Wildcats in 2011 and right after Reagan was reelected for his second term[…]

The Cats have been better this year, but as they usually do, they lost to Florida to end any hopes of removing that monkey off their backs and then took a beating from Mississippi State at home last week to solidify their standing as non-SEC East champions one more season. If that doesn’t make Kentucky fans long for basketball season even more, this game will.

Kentucky is improving each year under Mark Stoops, but any large success will quickly be followed by a huge payday at another school for Mr. Stoops[…]

No moral victories for Tennessee this week. The Vols take care of business in dominant fashion in Lexington as they prepare for a strong November finish.
PREDICTION: Tennessee 50, Kentucky 14

What are your predictions for the Halloween clash?