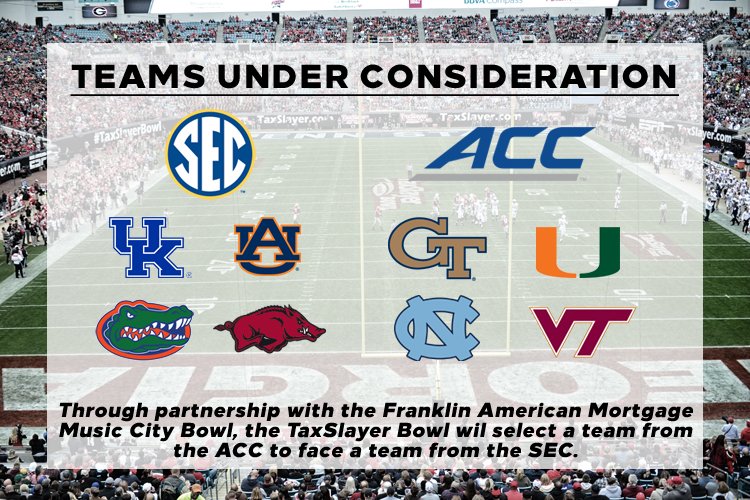 We won’t know for certain until Sunday, but word could leak out today about which bowl Kentucky will end up in. We’re hearing that the TaxSlayer Bowl and the Belk Bowl are Kentucky’s most likely destinations, and this morning, officials at the TaxSlayer Bowl confirmed to the Herald-Leader that they’re considering four SEC schools: Kentucky, Auburn, Florida, and Arkansas. On the other side, they’re considering four ACC schools: Georgia Tech, Miami, North Carolina, and Virginia Tech.

Assuming Alabama beats Florida on Saturday, it looks like the Gators will end up in the Outback Bowl and Auburn the Sugar Bowl, leaving Kentucky and Arkansas in contention for the TaxSlayer Bowl. Kentucky’s closer to Jacksonville and would probably bring more fans than the Razorbacks, so you have to feel good about the Cats’ chances of playing at 11 a.m. on New Year’s Eve, especially when you see this tweet from @TaxSlayerBowl this morning:

woke up to check my BBM and all I see is #BBN pic.twitter.com/pgUXFVlZ52

Want to show the TaxSlayer Bowl you want the BBN to party in Jacksonville? They gauge fan interest through ticket preorders, so head on over to UKFootballTix.com to get yours (you won’t be charged if UK goes somewhere else).