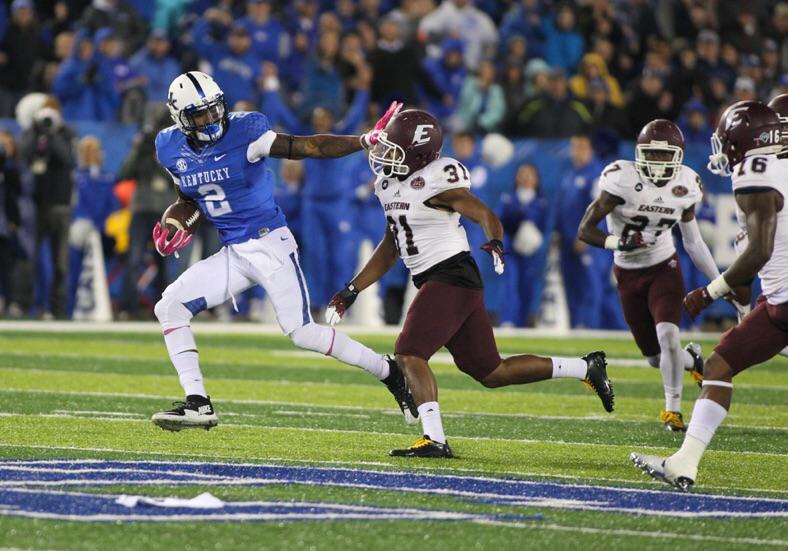 They say a win is a win, but tell that to the stain in my shorts from watching Kentucky go down two touchdowns late in the game to the neighboring Eastern Kentucky Colonels. I had very little to no confidence when Eastern scored the go-ahead touchdown; I had zero confidence once Eastern added another on top of it with a little over seven minutes to go.

Then Patrick Towles and Kentucky’s offense stepped up and got the job done, tying the game on a fourth-down fade route to force overtime. From there, things looked positive entering OT and all of those “what-if” thoughts running through our heads slowly disappeared. (But really, can you imagine how bad a loss would’ve been???)

It was a hard-fought game, one that was supposed to be a blowout, but the fourth W is in the win column. And that’s all that matters in the end.

It’s safe to say the Cats overlooked the opponent this week.

With a bye week and the biggest game of the year ahead, there’s no doubt Kentucky is guilty of looking past its FCS opponent. Early in the week, Mark Stoops mentioned getting Drew Barker some reps in this game, as well as other reserves. He never came out and said he expected to be up big on the Colonels, but quotes from him and the assistants suggested strong confidence heading into the game.

Yes, Eastern played well — kudos to them — but an SEC team shouldn’t be down two touchdowns to an FCS school at home. The talent gap is just too wide, even at Kentucky. Chalk this one up to relaxing all week and not getting up for the opponent. And Eastern giving them hell on top of that.

The rushing numbers are disappointing.

180 for Eastern, 55 for Kentucky. No excuse for that. Shouldn’t happen. Ever.

Patrick Towles was outstanding. After halftime.

After giving the Drew Barker advocates plenty to complain about in the first half, Towles turned things around after the break. He responded to a 10-for-19, two-interception first half with 222 yards on 19-of-23 passing and two touchdowns in the second half and overtime.

Just when you think Towles has tanked and it’s time to give his backup a look, he answers the call and plays the quarterback position as well as anyone. We saw it in the Missouri game after many fans called for a change all week, then again tonight when he played a disappointing first 30 minutes. Now, how do we get him to do it all of the time? It’s in him, we’ve seen it. Just gotta find that consistency.

And for the fourth time this year, Kentucky closed out a game by putting points on the board and making stops defensively with their backs against the wall. They love to make us sweat these out, but they get it done in the end.

The aforementioned record comeback was made possible because of one Dorian Baker. He hauled in a difficult fourth-down catch for the game-tying touchdown; then bulldozed his way into the end zone in overtime for the game-winner.

What a grab by Dorian Baker!! pic.twitter.com/jNvRp6a2XE

Shannon Dawson said Baker demanded the ball on a screen with no blockers in overtime. Well that’s what he got, and he took it to paydirt for the win. He carried the Cats in the end.

Baker finished with eight catches for 82 yards and those two scores. The win doesn’t happen without his playmaking.

Cory Johnson has been a monster the last three weeks, tonight especially.

There’s a reason I picked Johnson as my MVP on the pregame show: he has been unblockable as of late and Eastern’s offensive line wasn’t cut out to slow him down. Johnson recorded a career-high 19 tackles against the Colonels, coming off his old career-high of 11 tackles against Missouri. He set a record for tackles by a UK defensive tackle and closed out the night with a sack on the final play of the game.

Confession: I couldn’t watch Miles Butler kick the extra point at the end of regulation. I can’t be the only one. Speak up, guys. It’s okay.

Stoops said he expects MacGinnis to be back next week.

Josh Forrest and Ryan Flannigan combined for 21 tackles, probably missed that many, too.

Forrest and Flannigan seemed to be in on most of Kentucky’s tackles in the game. They somehow seemed to miss every tackle too. I counted at least six blitzes where one of the two linebackers blew past the line and missed the QB. It got to be very frustrating, until one of them made a big stop on the same drive. They’re both very good, but could be even better with improved tackling.

This was a hell of play by Towles and Bone:

Bone had a good game with seven catches for 85 yards. Nice breakout night for him after a rather quiet first four games.

By show of hands, how many people were dying to put some pads on Boom Williams?

It was gut-wrenching to see Boom on the sideline in sweatpants when the offense was stagnant. The SEC Network didn’t do us any favors by cutting to him often and after failed drives.

Let’s hope Boom learned that lesson by sitting out when his team was desperate for his help.

As ugly as it was, the record reads 4-1 going into Auburn.

41 Comments for Kentucky needed overtime to get past EKU