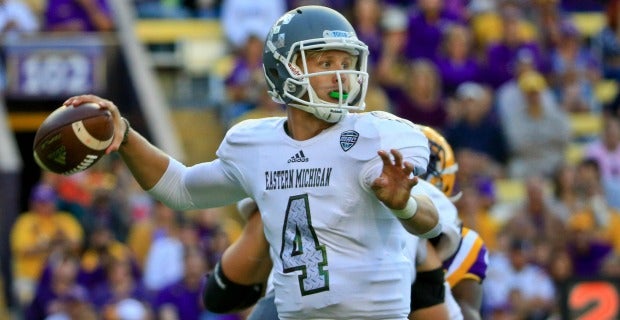 At Wednesday’s press conference, there was just one Eastern Michigan player specifically referenced: quarterback Brogan Roback. The fifth-year senior has played in games for the Eagles during each of his four seasons, and is considered a sleeper pick for the 2018 NFL Draft. He poses the biggest threat to Kentucky’s defense so far this season, according to our own Freddie Maggard. Roback averages 38 pass-attempts per game and has 40 career touchdowns.

“He’s a really, really talented kid,” defensive coordinator Matt House said. “He gets the ball out fast. He throws those back-shoulder fades really well, [he] makes their offense run.”

When asked to compare Roback to other quarterbacks the Wildcats have seen this season, House pointed out similarities to South Carolina QB Jake Bentley. Bentley had his best game of the Gamecocks’ season against UK, throwing 24-36 for 304 yards.

In terms of preparation, the team has been putting in the reps to handle those back-shoulder fades.

“It’s like with anything, if you’re going to get faster, you’ve gotta run. So, if we’re going to prepare for a back-shoulder fade, we gotta throw hundreds of back-shoulder fades against our DBs all week,” defensive backs coach Steven Clinkscale said. “So we just prepared with different techniques, how to handle it, how to get in position, how to make a play… [I] try to make it hard on them.”

Clinkscale noted they would be playing press or zone coverage and giving Roback a variety of looks throughout the game. If something happens and they don’t get to him quick enough, the rest of the defense has to compensate.

“When he throws the ball, we’ve got to execute. There’s going to be times when we’re not going to get to the quarterback, and the coverage has got to compliment the rush and vice versa… That’s all we’ve been focusing on: covering the receivers, tackling the ball, straining, finishing the game and communicating.”

The most threatening part of Roback’s game stems from his incredible versatility.

“I think he’s a very good quarterback, so he poses a lot of challenges,” Clinkscale said. “He’s smart, he knows how to change the call based on what look we give him, he can make all the throws, he’s versatile, he’s a good runner. Heck, he even punts for them. So he’s a very good player.”

Despite these challenges, Clinkscales is confident Kentucky can “execute our game plan and go out there and play hard.”

“You know our guys will go out there and execute everything we focus on every week,” Clinkscale said. “So it’s not a specific game plan, it’s just ‘execute our fundamentals.'”

Last season, Roback was suspended from the team for the first three games for a violation of team rules. Still, he finished with 269.4 passing yards per game, which placed him third in the Mid-American Conference.