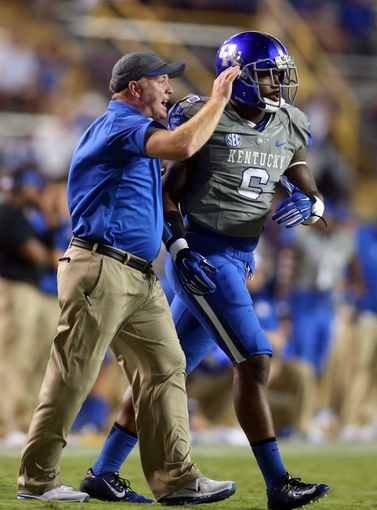 When Mark Stoops arrived on campus in 2012 he made locking up local kids in his first class a priority. Ryan Timmons was the first Kentuckian to commit to Mark Stoops and on signing day Jason Hatcher joined him when he flipped his commitment from Southern Cal. The consensus top 20 Defensive End prospect was one of the crown jewels of Stoops first class but he enters his junior season as almost an afterthought. In fact in ESPN’s article today “Why Kentucky will or won’t make a bowl game” cited the lack of Bud Dupree and Za’Darius as a reason why they wouldn’t. Here’s what the worldwide leader had to say:

Let’s see how Hatcher can replace Bud’s 12.5 tackles for loss and 7.5 sacks. As a freshman Hatcher played in 10 games behind Z and Bud and despite the limited minutes he recorded 19 tackles, 3 tackles for loss, and 2 sacks. Last year Hatch Attack tallied 27 tackles and 1.5 sacks in 10 games. Once, again he was playing behind a future first and fourth rounder. That’s allowed Jason Hatcher to fly under the radar and enter this season ready to breakout.

One of the strengths of last seasons defense was the ability to put some pressure on opposing defenses and force them into bad passes and interceptions. Jason Hatcher can bring that pressure this upcoming year. Some think the defensive line is a poisitionof concern for the upcoming year but I think its secretly going to be the X-Factor. Hatcher may not be Bud Dupree but he the has talent to win games for the Wildcats. If the Cats don’t make a bowl it won’t be because Dupree and Smith have gone on to the league.