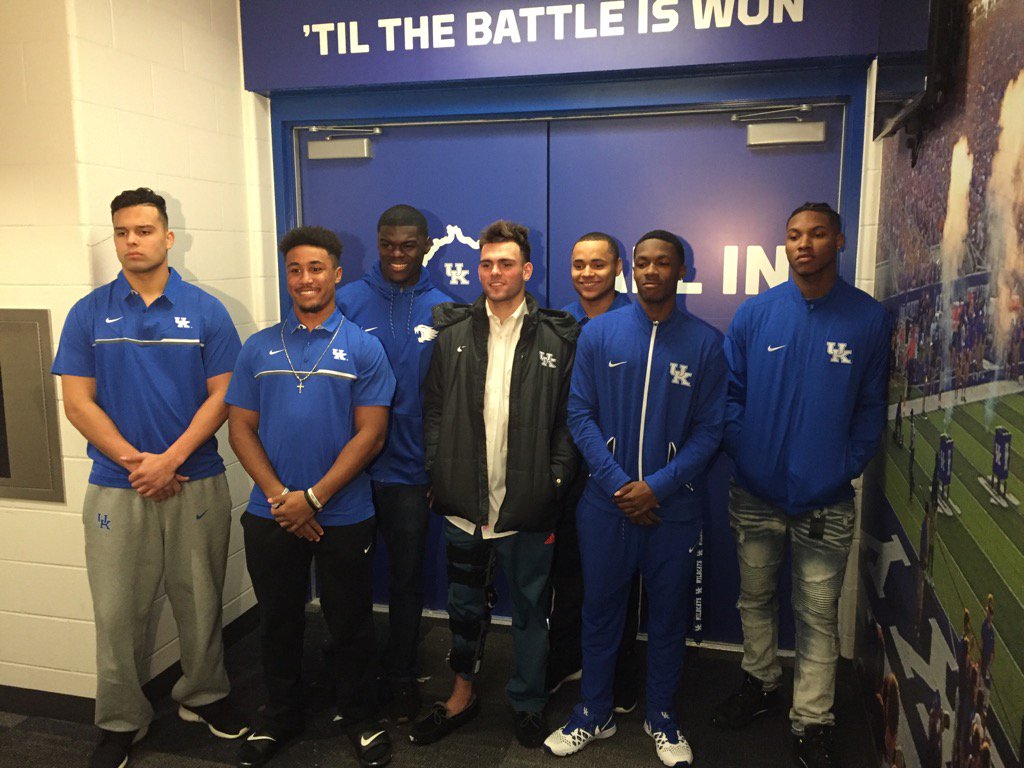 Mark Stoops was spotted with five-star Alabama commit Jedrick Wills multiple times yesterday, but he isn’t the only one trying to convince Wills to join the 2017 class.  “I think we all know the big one. I’m still working on it,” Wood said.

The Moment Clevan Thomas Knew He Made It

Clevan Thomas’ father, Clevan Sr., was and is still quite the baller.  A defensive back for Florida State, Thomas Sr. was a starting cornerback for Florida State’s 1999 National Championship team.  After his collegiate career, he played for more than decade in the Arena Football League.  The most recent stats I could find are from 2015.  As a 36-year old he had 41 tackles and 5 interceptions.

“You know how Michael Jordan had his brother, and when he beat his brother he felt like he could beat anybody?  Well that was my dad and me,” Clevan Jr. said today.  “He’s still in shape, so me and him go one-on-one.  My first time, it was like a year and a half ago, I caught a bomb over him and I was like ‘I just did that?’

“I’ve seen him jam big guys.  I caught the jam and still did that.  If I can do that against my Dad, I can do it against somebody that’s my own age.”

Clark and Koback are Talkers

The quarterback (Danny Clark) and the running back (Bryant Koback) are roommates this semester.  Between the two of them, I don’t know how anyone can get in a word.  During Koback’s interview, there were a few times he was going so fast, he had to stop and take a deep breath, yet he had this to say about his roommate:

The elephant in the room had to be addressed.  Clark’s smile went away when he was asked if anybody teases him about it.

“No, not really.”  He added, “It’s not a big deal.  There’s like three other guys with schools on them, so it’s not really a big deal.”  Koback backed up his roommate.  “We let it slide, for now.”

Clark plans on keeping it for now, but, “If it becomes such a big deal for people, it can be covered up in an hour.”

Two of UK’s seven early enrollees arrived injured.  Walker Wood injured his knee in the state championship game.  Wearing a brace on his left leg, Wood said he will miss spring practice, but hopes to be cleared to play by June 1.

Bryant Koback broke his tibia and fibula on a horse collar play four games into the season.  I’ll spare the details because it sounded painful.  Koback is still rehabbing with an extra two hours after each early morning workout.  The advanced technology and rehabilitation tools will help the process move faster, but he doesn’t expect to participate in spring practice.  Koback should be at 100 percent for summer training.

Seeing Snow for the First Time

When you’re from the South and see snow for the first time… pic.twitter.com/GLeTH9UJ8p

It’s the first time the Florida guys, Thomas and Cedrick Dort, have ever seen snow.  As you can see, Thomas couldn’t contain his excitement: “Can I make snow angels?”

The Georgia linebacker is larger than you think.  Listed at 6’3″ 206 pounds, he’s already added weight since arriving two weeks ago.  Born into a military family in Hawaii, Davis was wishing for that weather today.

Dort arrived two weeks ago weighing about 160 pounds.  Under the nutrition and training plan, he’s already gained about eight pounds.  His goal is to weigh 180-185 by summer.

Lonnie Johnson: The Next Stephen A. Smith

The junior college transfer set to play cornerback this fall is a journalism major.   “I want to be a sports analyst after football.”  His inspiration: Stephen A.  He’s not as angry as Stephen A….some of the time.  “On the field, yes.  Y’all are getting the cool side now.”

In a group filled with large corners and big personalities, he might be the biggest of the bunch.  He was hilarious, but humbled to reach Division I football.  I’ll share his story from Gary, Indiana to two junior colleges to Kentucky in the days to come.